I Think I See A Pattern Forming Here....

It's getting harder and harder to find Matt Harrison cards that I don't already have. I don't really look for Nick Martinez cards anymore, and I rarely buy a Rusty Greer card on eBay (I just can't bring myself to pay $3 to have a 25 cent card shipped to me...I need Greer cards in lots!).

However, I still have the itch to add cards. And I have added a few. When I look at them, I think I see a pattern. My last post showed off a sweet Joey Gallo auto. This post is going to share a few more Gallo cards.

Gallo is the Rangers' best prospect, and he didn't do too shabby when he was called up this year. Keep in mind - he really hadn't played above Double A when he was summoned. However, when you come up the same year that Kris Bryant and Carlos Correa do, you may be judged unfairly. It sucks, but it makes his cards affordable.

For instance, I snagged this guy for less than $3: 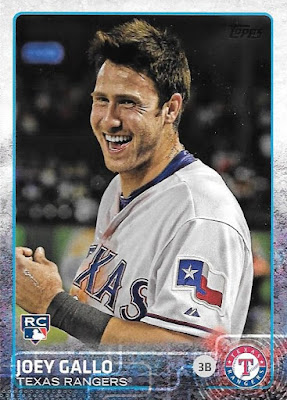 This is Gallo's photo variation rookie card. I like it quite a bit.

I was also able to snag this card: 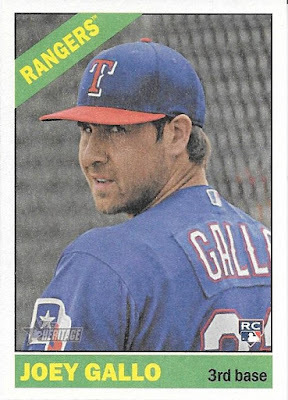 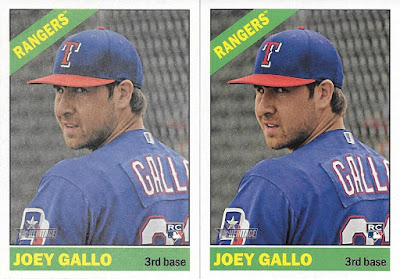 That is the standard base card from 2015 Heritage High Number on the right. The card on the left is the reverse print: the front is a matte finish, the rear is glossy. Now, I tried to get a copy of Mitch Moreland's reverse print and the card sold for more than $30. Rumor is that each card is limited to 10 or fewer copies, hence the reason for the price.

That being said, the seller had this card listed as "2015  Topps Heritage Joey Gallo RC #647 Rangers Reverse 1/1?" I felt that he had no idea what he had and contemplated sending him a message to let him know what the card was exactly. However, I checked his profile and saw that he was an experienced seller...he should know exactly what he is going to sell if that's the route he wants to take. Sounds kind of prickish, but I think it's fair to expect that of a high-volume seller.

Anyway, the card is pretty freakin' sweet. I'm happy to add it. And I think I'll get back to actively collecting Gallo cards. So, help me out and send me what you got!
Posted by J. Meeks at 9:10 PM 2 comments:

An Introspective -OR- Where I Am Today

Just about 11 months ago, I decided to make a serious life change. I decided to quit my well-paying job and return to school to work on my PhD, which doesn't pay terribly well while you are in school.

This meant that my card budget would be cut back. It was hard for me to do that. I didn't have much of a social life while I was working, so baseball cards were my "thing" - that thing I do that is just for me, to give me an escape. My social life - and budget - were cut drastically when I came back to school.

Along the way, I was able to save up and buy a few boxes, clearly breaking my new year's goal of only buying one box of three different products. I also got rid of some of the less-essential parts of my collection.

I also noticed that a few blogs threw in the towel during the last eleven months. There were times when I thought I should be one of them. I have only been able to post five or six times a month. I would wonder if anything I wrote was of any value to anyone.

But I kept stepping forward. Here I am today, writing about my recent journey. I don't know where I am going with my collection, but this blog has been rather cathartic for me. I love reading about other people's adventures, and I love communicating with other bloggers as well.

So enough of that. Let's look take a look at a card that I didn't know if I would ever get: 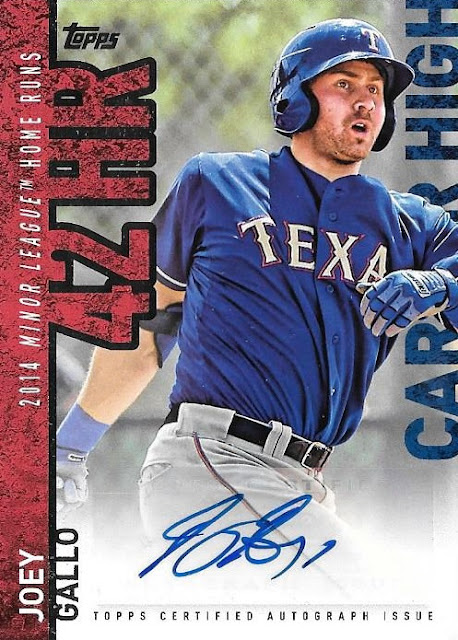 This dropped with 2015 Topps Update. When I saw Gallo was on the list, I expected that his card would be through the roof. I put this card in my search on my eBay app and waited as I saw it regularly sell for nearly $20. That was a bit rich for my blood...that kind of money is generally reserved for Matt Harrison cards.

However, this one was listed for $9 buy it now and free shipping. I was more than okay paying that price for the card. So, after pressing the button and waiting about a week, I received this card.

If I had one problem, it would be that it's a sticker auto. But it is what it is, and I'm glad I have it.

Are there any cards from Update that you absolutely have to have?
Posted by J. Meeks at 8:00 AM 6 comments: