A New Addition for the '69 Set

My eBay purchases seem to have really slowed down recently. As a matter of fact, my collecting purchases in general have slowed. I don't think that I am losing interest in the hobby, I just think that I am finally learning what most of you already know - Topps floods the market with a ton of different products and rarely use different photos. So it's kind of like buying the same cards over and over. Call me jaded, but I'm fairly sick of it.

When I do purchase cards, it seems they are for various PCs. This was this situation with my latest purchase. Behold: 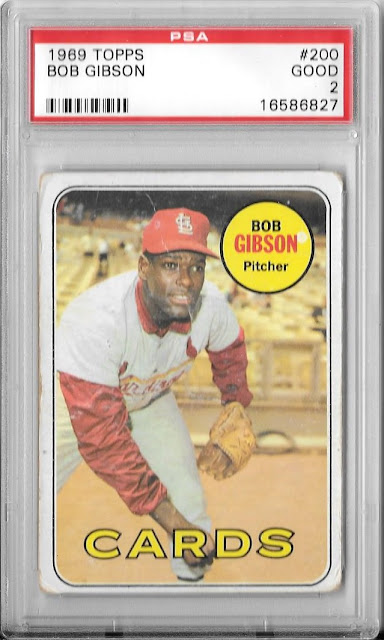 I was able to grab this PSA 2 Bob Gibson for essentially a Lincoln. I know some of you will feel I overpaid, but I happily traded my cash for this cardboard. The card has seen its fair share of life. It has a crease right down the middle and the corners are well loved.

The more I work on this set, the more I fall for low-grade cards. I look at each one and imagine the life it has lived - from a little boy tearing open the wax, to a young man trading it for his favorite player. Perhaps the card went into a 10-year-old's shoebox and stayed there until that boy grew into a man, who then sold it in a garage sale. If only the card could talk, I'm sure it would have an incredible story.

That's it for now. Thanks for sticking with me even though my posts are few and far between.

Another Tate Added To The Collection

A little while back, I posted about a few Dylan Tate cards that I recently acquired. Tate was the Rangers' 2015 first round pick, drafted number 4 overall. He should be part of a pretty special rotation in the future, assuming he doesn't get dealt.

2016 Bowman Inception hit the streets last week (or the week before, I can't remember). For whatever reason, these cards don't sell for nearly as much as traditional Bowman Chrome autos, so I keep an eye out for a deal.

That's exactly what I found in this Tate parallel, numbered to 99: 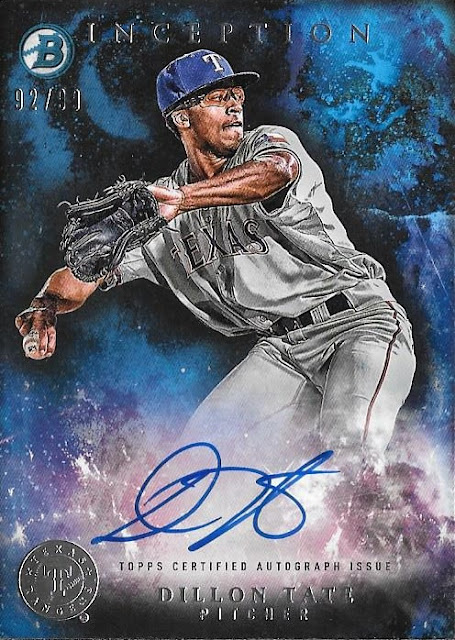 I snagged this for less than three bucks! Happy to have it.

Either way, when you can get an on-card auto of a top-5 pick for less than a Lincoln, you do it.
Posted by J. Meeks at 9:50 PM No comments:

Let's Have An Update, Shall We?

Sadly, as it is becoming the norm rather than the exception, it has been a while since I last posted. I have been reading the blog roll, but, save for a few instances, I haven't had much interaction. I have, however, continued to collect, and my scan folder shows just a bit of what I need to talk about:

I recently knocked a couple cards off the Top 5 Most Wanted.

Let's have a look. 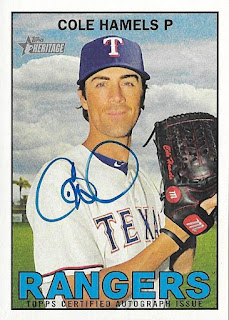 First up is the Cole Hamels Real One auto from 2016 Heritage. I managed to pick this up at my LCS. I've been looking for one for a decent price, but nothing ever found its way to eBay in my price range. However, I traded a few cards to my LCS owner a while back, so I was able to grab this for essentially $10.

The next card not only had a place on the Top 5, it also had a spot in my Bowman Auto Project. 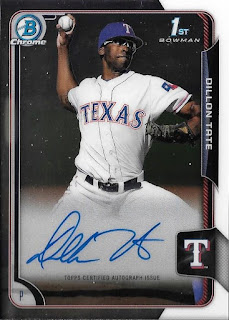 This is the 2015 Bowman Draft Chrome auto of the Rangers' 2015 first round pick (#4 overall) Dillon Tate. This card has also been too expensive for my tastes, so when I saw a BIN price that was in my range, I grabbed it.

But that isn't the only Tate card I grabbed. He has a few autos in 2016 Bowman, and I couldn't resist. 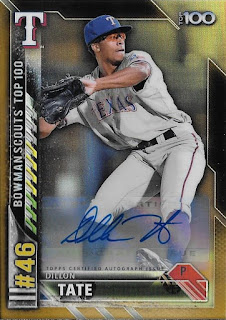 Tate has an auto in the Top 100 insert line. This is the gold parallel, and by my understanding, this is the only version of the card that is signed. I have yet to see any other parallels that are autographed. 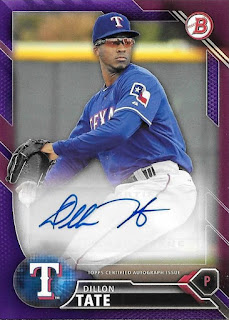 Then I snagged this purple retail auto. I'm too lasy to look up the numbering, but I think it's to 199. 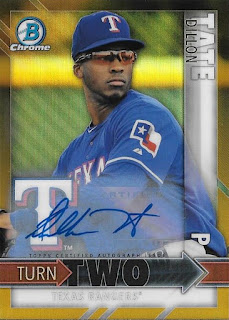 Tate is also featured on a Turn Two insert. This one took a bit of spare change to grab. Why? Well... 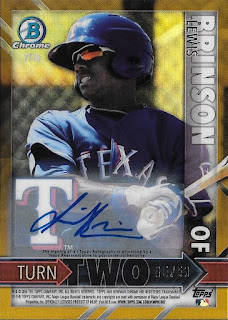 ...Because it features two autographs. Lewis Brinson is featured on the back side. Like the Top 100 insert, it appears that this is the only version of the card that is autographed EXCEPT for the superfractor. 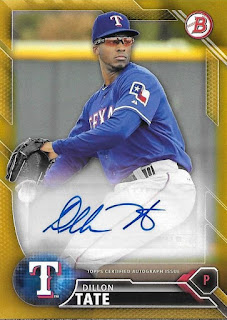 So there are a few new things. Hopefully I can a few more soon (well, sooner than later).

Jose Altuve Keeps Finding His Way To Me

Recently, I've noticed a trend in the "hits" that I pull. One particular player keeps showing up in my packs. Who is it?

A few weeks ago, I decided to buy a box of 2016 Museum Collection. It's an expensive box, and it only contains three cards. I found this in my box:

That's a jumbo relic/auto numbered to 10. I sent it in to Beckett to have it slabbed (side note: I should get this back today or tomorrow).

Today, I bought a box of Stadium Club. I love that product. My first auto was this guy: 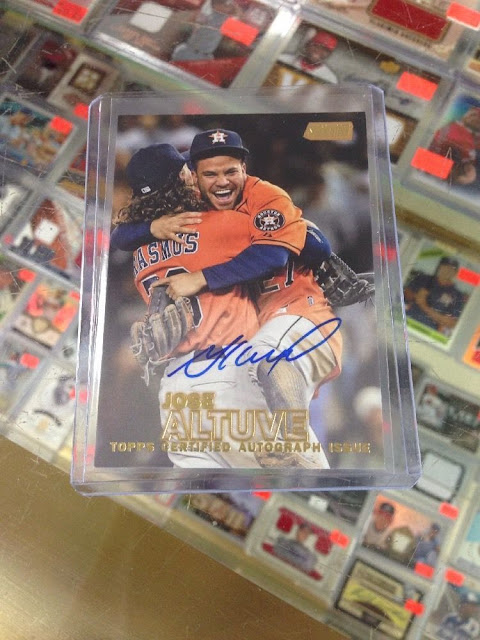 This is the gold auto parallel, numbered 21 of 25. I've never pulled an auto parallel from Stadium Club before, so that's pretty cool.

Let me say here that I am not complaining about pulling Altuve autos. There are definitely worse autos to pull. Even better, Altuve is pretty collectible, so both of these should sell fairly easily. I know not everyone is a fan of selling rather than trading, but I use the proceeds to enhance my collection. These will certainly do that. (I've got the Stadium Club auto listed on eBay for $45. If you are interested in either card, let me know!).

Bowman Inception streets later this week, and I am fairly certain Altuve won't be in it. Looks like my streak will end before it ever really gets started!