Well, It's That Time Again...I Suppose I Should Post Something

I've been reading everyone's posts lately, I just haven't posted anything. Between school and...well, school, I've been swamped. However, I have picked up a few cards. I mentioned that I had a few dollars left over from a few deals I made before I left the oil and gas industry....those dollars are officially gone.

I'm not going to post everything tonight, though. I have to keep you coming back, right? So let's take a look at the new additions to the Matt Harrison PC.

First up, some minis: 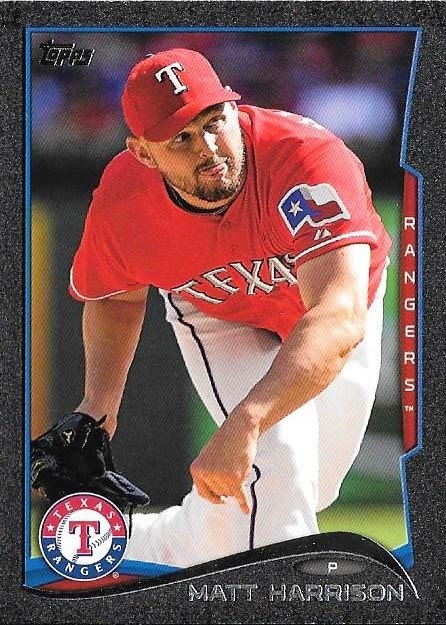 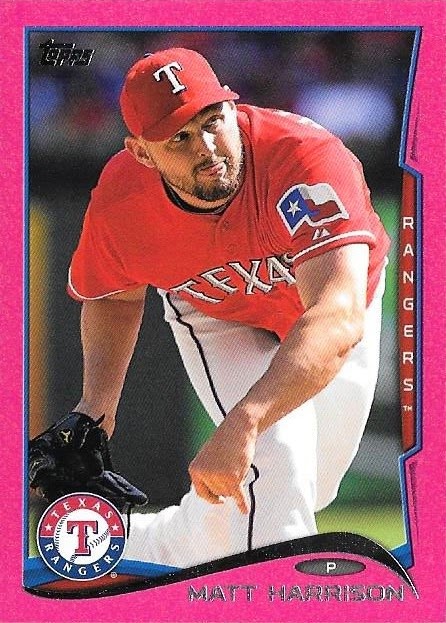 If I didn't tell you these were minis, you'd never know. But they are. And now you know. The black is numbered to 5 and the pink is numbered to 25. I need only the mini base and gold parallel to be done with 2014 minis! (In case you forgot, I picked up the Platinum 1/1 a little while ago)

I also snagged this guy: 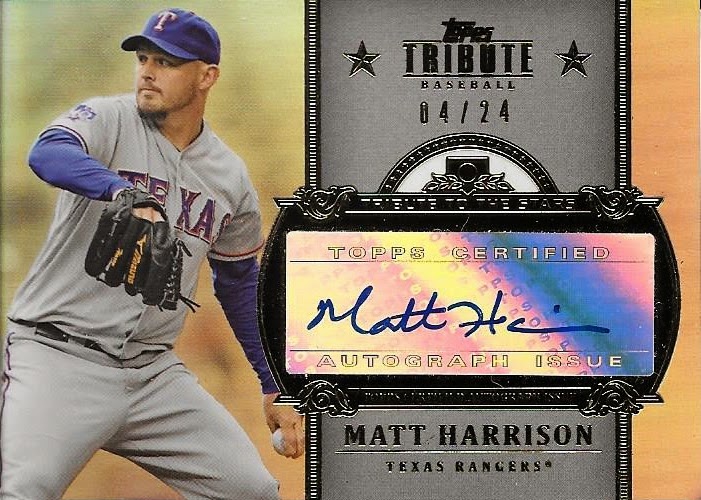 The 2013 Topps Tribute "Tribute to the Stars" auto numbered to 24. The scan really doesn't do the card justice. It's absolutely beautiful.

Now, on to a few more card-related things. First, I am sending cards to Tony and Keith today. Sorry it took me so long to get these in the mail to y'all. I know it is frustrating on your end, and I sincerely apologize.

Second, since Mr. Nachose Grande is hosting a 2015 Topps Heritage break, I think I will refrain from doing the same. I don't want to be a direct competitor. What this means for you: I will probably wait and once again host a Gypsy Queen break (last year was fun, right?) or a Bowman break, both of which release in April.

Lastly, you may have noticed that I said I Was out of card money. That's no joke, and it sucks. So, I decided to do what I always do; sell a few cards on eBay that don't fit my PCs. However, I want to do something a little different. Remember this? 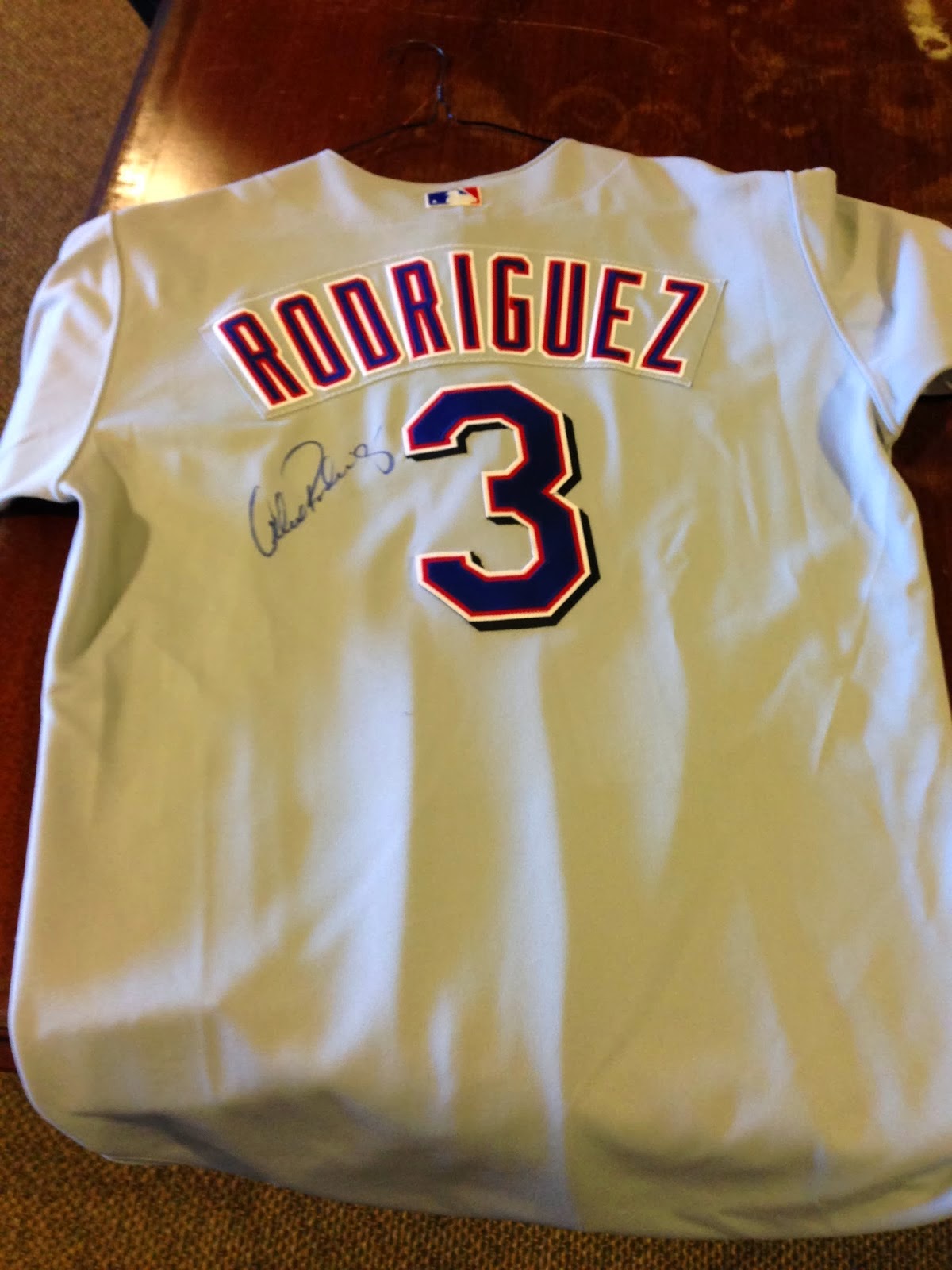 It's a 2001 team-issued, autographed (and team certified) A-Rod jersey. My former boss gave it to me as a Christmas present. I was stoked at the time, but it really doesn't fit my collection and I have nowhere to display it. So I thought about raffling it off - to you! I would sell spots - 10 spots for $15 each (maybe 3 for $35) - and then "draw" a name via random.org. Of course, everything would be "televised" via one of the video services. Is that something any of you would be a fan of? Leave me a note below telling me if that is a good - or bad - idea! I would appreciate it!

Time To Clean Out The Scan Folder

I've got too many scans that I haven't shared. Most of these are cards that I added between the time I left my old job and today. They are pretty much self-explanatory, so apologies in advance for the lack of commentary. 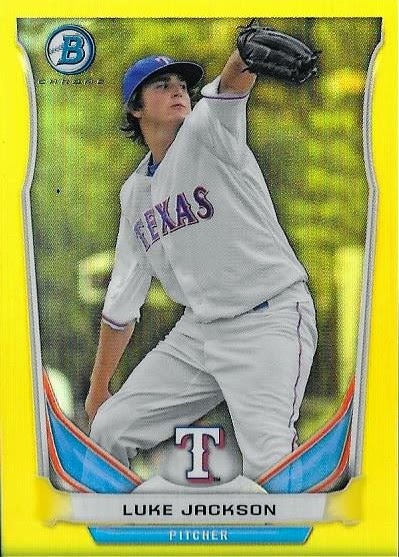 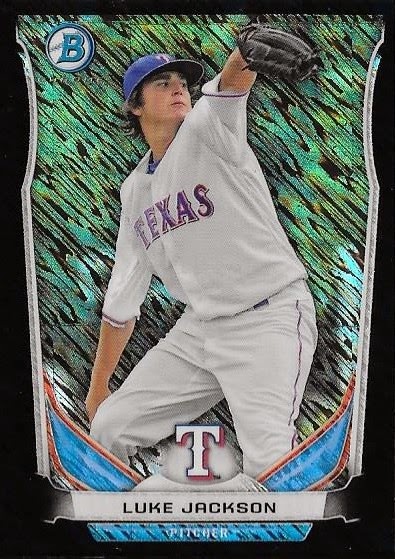 Here's another one. The black shimmer refractor. This one isn't numbered. 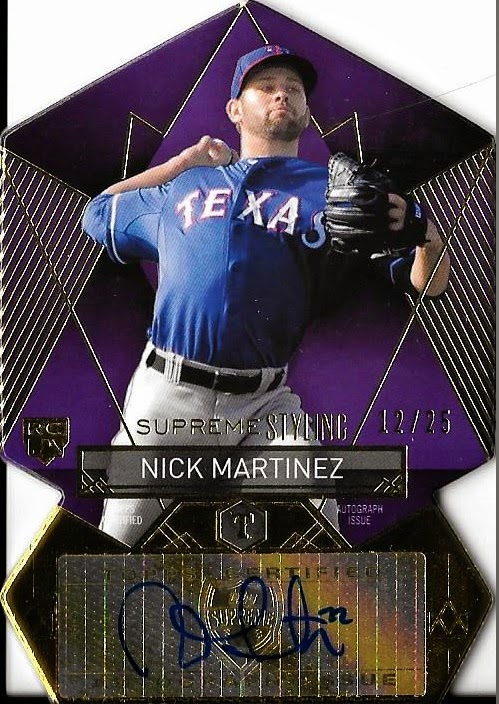 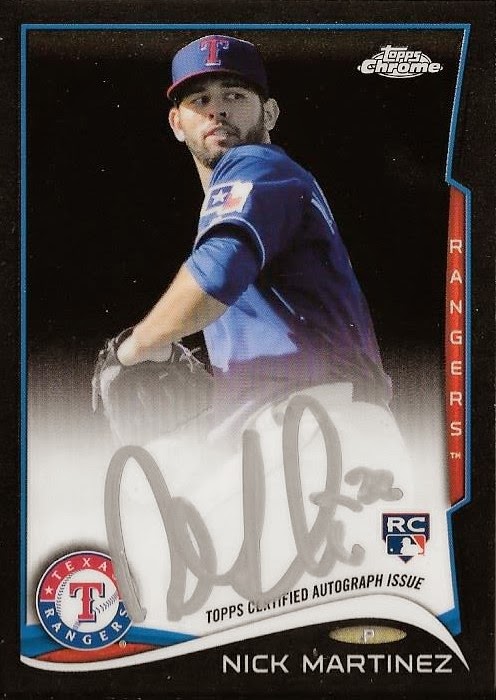 Another Martinez, this one the '14 Topps Chrome silver auto numbered to 25. 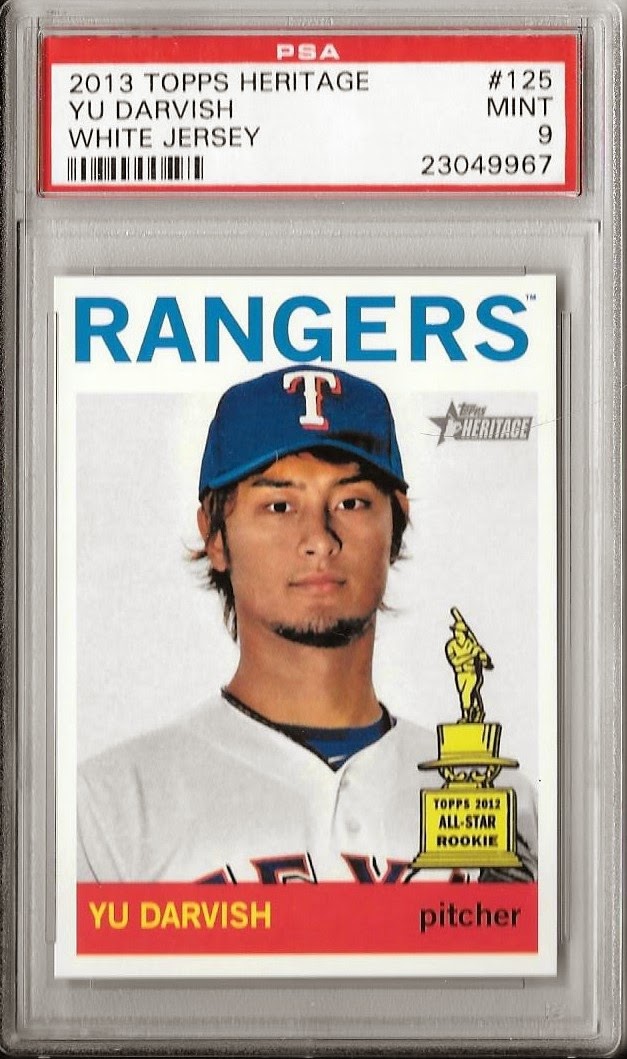 As I mentioned in my goals for 2015, I wanted to buy only 1 jumbo box of each of the flagship releases (S1, S2 and Update). Well, I failed, kind of. I bought a jumbo box and two more jumbo packs.

Unlike everyone else, I don't really care for the new design. The full bleed/fade really aggravates my OCD makes the cards look "busy" before you even get to the image.

Also, other than standard foil parallels and the gold parallels, I didn't have a single numbered parallel out of the bunch. No pinks, blacks, snow camos, etc. Well, except for one. More on that in a moment. Whereas my 2014 Update produced an image variation and a sparkle variation, my 2015 jumbo provided only the sparkle.

I also had a ton of duplicates, yet I did not receive a copy of every base card. Hence the reason I bought two additional packs. Anyway, enough complaining. Here's what I got.

I mentioned that I pulled a "parallel." Well, have a look: 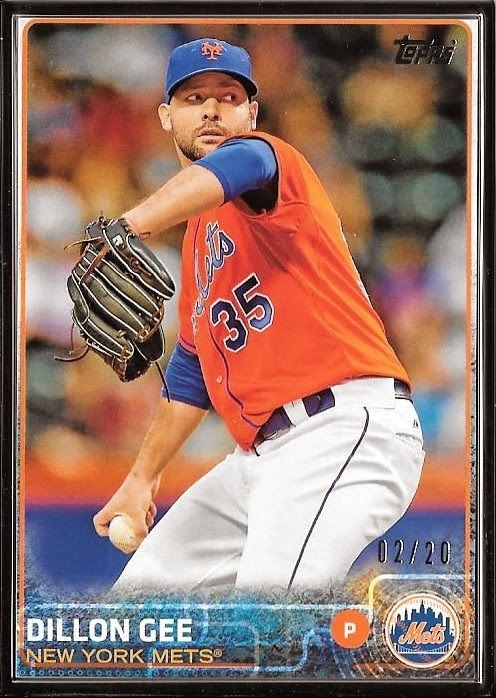 It's the framed parallel of Dillon Gee, numbered 2 of 20. I can't even begin to explain how much it bothers me that this is now considered a parallel.

The first relic was of the manufactured variety: 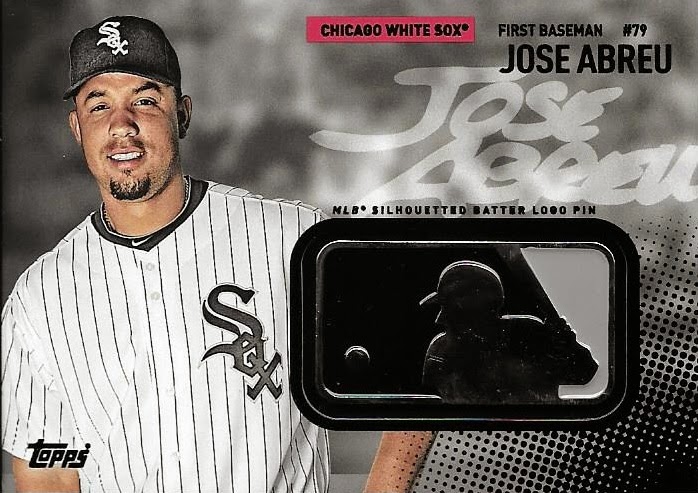 The Jose Abreu player silhouette relic. Topps keeps pushing the boundaries of what is classified as a "relic."

The second relic is one that I would never want, so I am pretty sure Tony will take it: 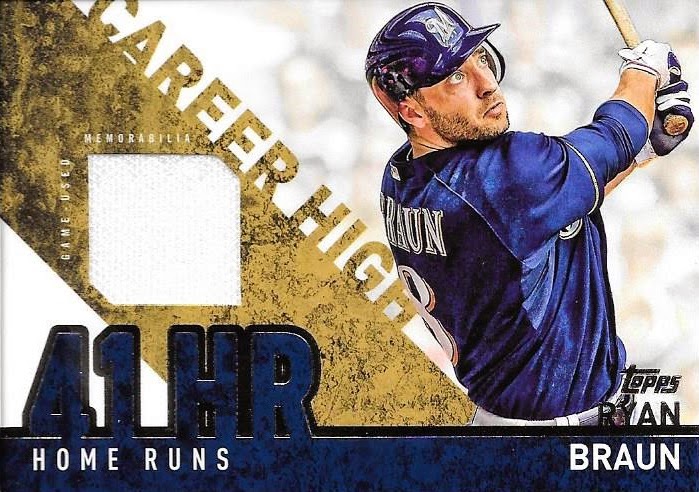 The Ryan Braun Career High relic. Generic white swatch. Tony, if you don't want it, let me know and I'll open it up for trade.

The auto was a bit better than the "relics": 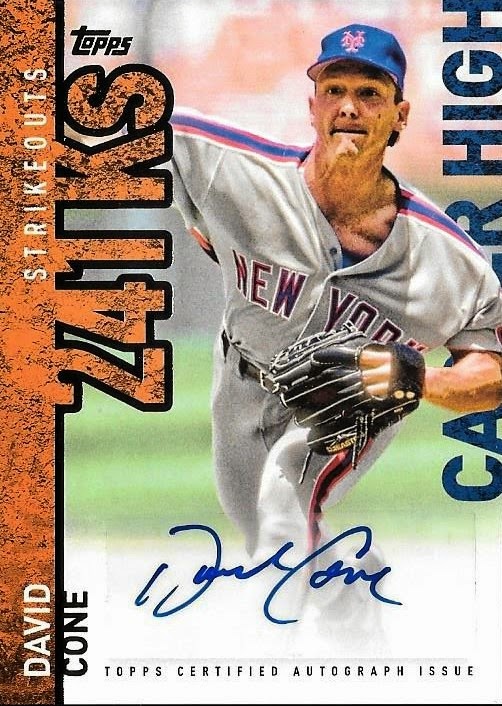 The Career High auto of David Cone. Better than most of the autographs, but still not someone I go crazy for. Keith, you get first shot at it (and the Gee, if you want it).

Lastly, the "best" "hit" (I use both of those terms relatively here) came in the form of a sparkle variation: 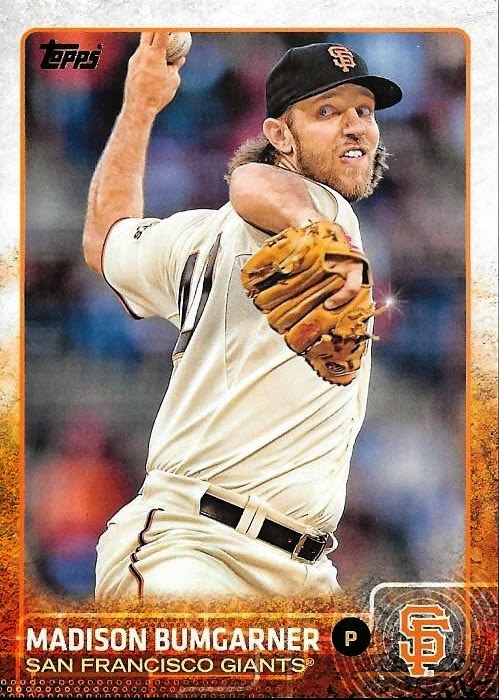 Mr. World Series MVP himself. Normally, I would trade this card away, but people are paying a nice chunk of change for this card, so it will soon be on eBay. Just a few days ago, Brian, the brains behind PATP, pulled a Kershaw sparkle from a repack. I bet he sold it, too.

As I mentioned, I did not get every base card in my jumbo box, which is ridiculous. So I decided to buy a couple more jumbo packs to try to get the remaining cards I needed (I didn't). From those, I pulled a relic and a photo variation. 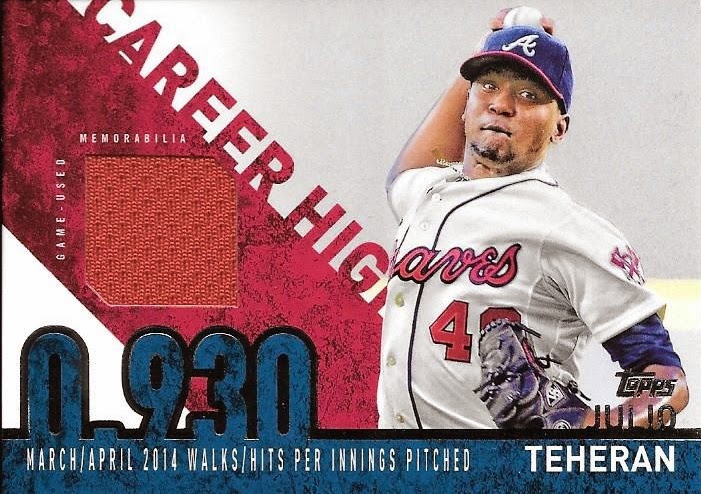 Another Career High relic, this time of Julio Teheran. At least it isn't a white swatch this time.

And the photo variation: 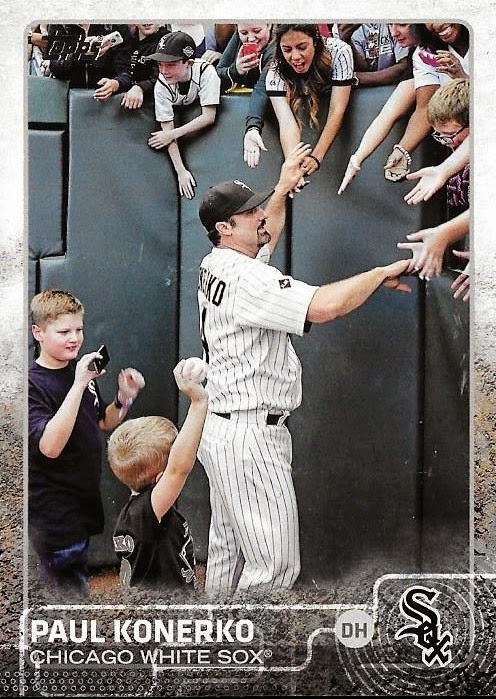 Mr. Paul Konerko. I like this card. Konerko never got the attention he deserved, so it was nice of Topps to include this photo on a card.

So there it is, nothing terribly exciting for my box. I will have my needs list and trade list up soon (hopefully this week, though no promises). All of the cards are for trade, though a few are being held for people (listed above) that I feel deserve the first shot. Hit me up on the others!
Posted by J. Meeks at 3:12 PM 5 comments: