Nate of Big 44 Sports Cards sent me an email last week inquiring about the Glasnow I pulled in one of my 2017 GQ Boxes. He also asked if I had done any group breaks recently, and that made me want to do one. It has been a really long time since I did, so now seems as good a time as any. I put some feelers out on Twitter, but it seems that I should do the same here. So here's what I'm thinking:

The two are identical except for the Bowman, with Option 1 breaking a single-auto hobby box and Option 2 breaking a three-auto jumbo box. The price shown includes shipping, and all cards will ship.

Is anyone interested? I've listed a few people who have agreed to participate below, so if your team is unclaimed and you want to join, leave a note in the comments and say which option you prefer.

PS - My posting has been especially sparse lately. I have been taking my qualifying exams (my oral defense is Wednesday and it will hopefully be over!) and moving to a new apartment, so I've been a bit preoccupied. I hope to get back to a somewhat-consistent posting schedule soon!

A Change of Address

I managed to send out a few PWEs and packages a couple weeks ago and again last week. I did so with no expectation of anything in return. However, should anyone feel inclined to send something my way, shoot me an email (judsonmeeks AT gmail DOT com) and I will be happy to send you my new address.

Following up on my post from yesterday, I have a second box of Gypsy Queen to share. I did pretty well in Heritage earlier this year, but this box may have topped it.

For the past three weeks, I have been toiling away at finishing a couple research papers. The big academic conference in my field, AEJMC, has an April 1 deadline for paper submissions, so I was trying to get my papers in. I finished around 3 p.m. and decided to stop by my LCS to grab a box to "reward" myself for, essentially, doing my job.

I was beat, so I took my box back to my apartment to open rather than opening it in the shop. I got home and sat down at my desk to dig in. 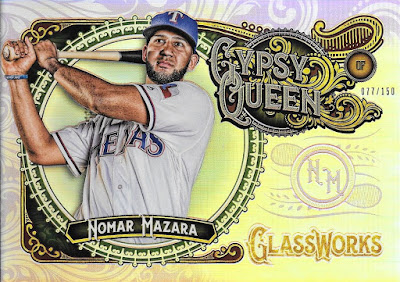 Right of the top, I pulled a purple GlassWorks boxtopper of Nomar Mazara! These are numbered to 125 and they are absolutely stunning. Good start! More after the jump!

Last month, I wondered aloud why Aroldis Chapman was featured as a Yankee on his 2017 Heritage base card, but as a Cub on his Chrome and mini parallels. 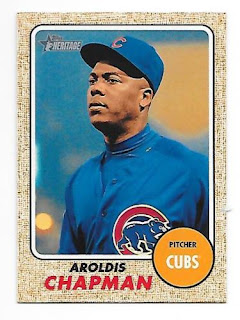 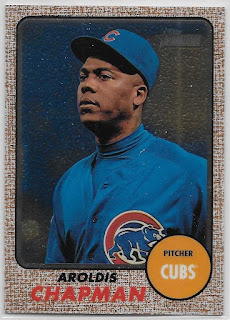 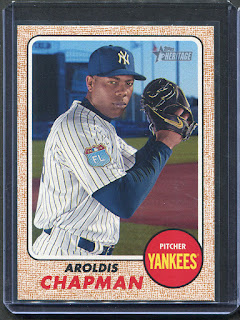 Well, fear not: the blogosphere's most loved Sooz came to the rescue and gave a reason.

"It's the timing of when the cards are due to the printer. The chrome and parallels have to be there much sooner than the base cards. There is essentially a late form that goes out for the base to get free agent signings and offseason trades. So Topps tries to capture it when they can."

Sooz is definitely an authority on the subject, so this answer is good as gold for me.

I said I wasn't going to do it. I swore to myself I wouldn't. I made a promise to myself that I had enough self-control not to do it.

I broke down and bought a box of 2017 Gypsy Queen.

After seeing the cards, I couldn't resist. They just look so great. I'm attached to GQ - it's the first set I built when I got back into collecting - so this set pulled on my heart strings.

Back to the story. I bought the first box - that's right, I bought more than one - last week, a couple days after release. Let's take a look and see how it was. 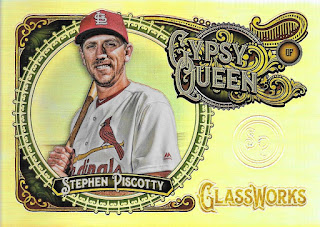 Right off the top - see what I did there? - was this GlassWorks boxtopper of Stephen Piscotty. By far and away, these are the best boxtoppers of any product I have opened since I got back into collecting. This scan just doesn't do it justice.

My first box had plenty of parallels. Here are the missing backplate parallels I pulled: 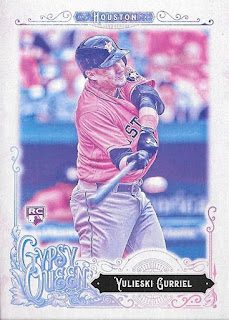 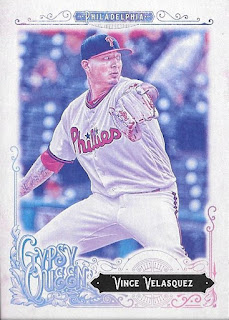 These are...interesting. They are easy to find, as they stand out like a sore thumb. They're unique, I give them that. But I still don't know how I really feel about them.

I also pulled a couple purple parallels numbered to 250: 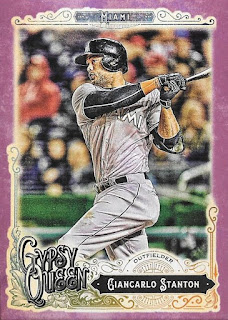 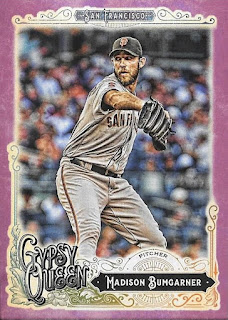 Not bad players! You've got a guy who rakes and then there's Giancarlo Stanton...how incredible was Mad Bum's two dingers on Opening day?!?!?!

I also pulled a green back variation: 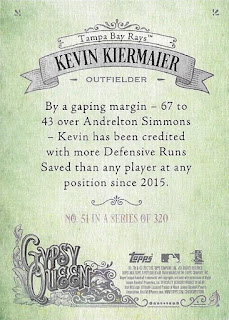 These aren't numbered, but I think they are numbered to 50 (or so I believe - I could be completely wrong).

The final numbered parallel I pulled was this black and white parallel of Kevin Gausman numbered to 50: 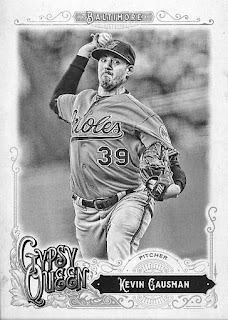 Beyond parallels, I pulled two variations. First up, this Marcus Stroman no nameplate parallel: 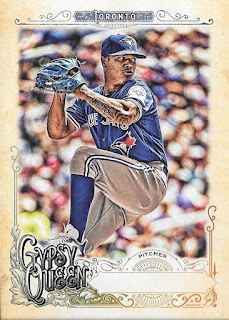 Mr. Stroman will appear again in a later post in a much more impressive fashion.

I also pulled this capless variation of Francisco Lindor: 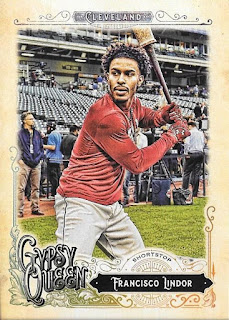 As promised, my box had two on-card autos: 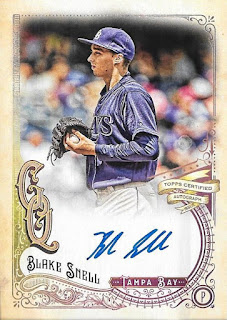 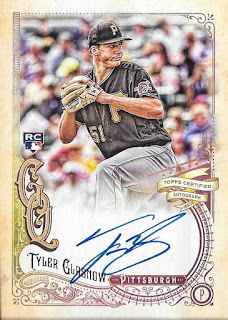 I guess my autos could have been worse. One knock - the machine that loads these into packs seems to have put a crease in them. They don't look like they have been folded over, but it does look as if they went through rollers that had too much pressure. You can't see them in the scans, but trust me - they're there.

The set got rid of the minis this year. I know there are some people who have a problem with this, but I'm not one of them. Those things were nearly impossible to store in any way. However, there is a "mini" insert set called "Fortune Tellers." I put "mini" in quotes because they are closer to tall boys than minis. Anyway, I really dig this set. I was stoked to see that there are three Rangers in it. I happened to pull the Cole Hamels in this box: 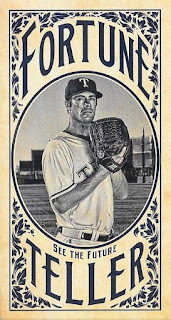 Anyway, everything you see here is for trade. well, everything except the Hamels. That's for me.

Keep your eyes open for a post about a potential second box of GQ.