Back From Dago and Goodies in the Mail

I got back from San Diego at about 1 a.m. this morning, only to turn around and come into work at 6 this morning to get caught up.  When I walked in, I found a treasure of goodies on my desk (via eBay).  Here are a few: 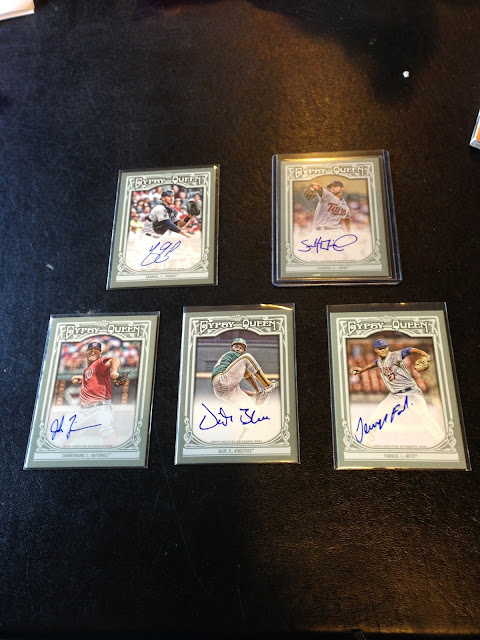 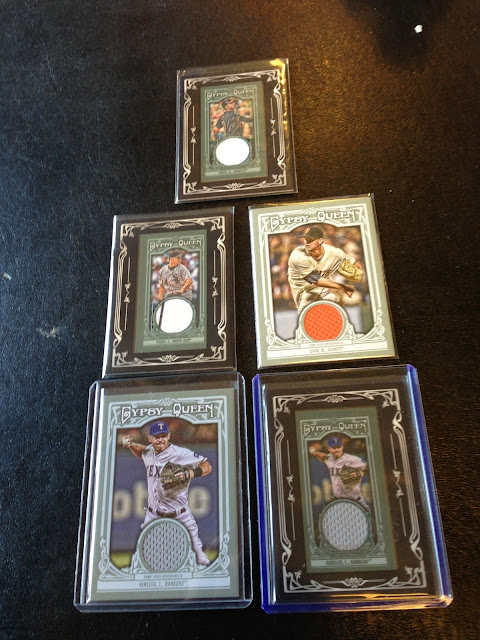 I also pulled another Adam Jones mini-relic (wonder what the odds of that are?) while out in Dago, which is cool.  I traded the first one I had to William over at foul bunt.  Also included in the new additions to my relic collection were a Jake Peavy framed mini featuring pin striping, a Matt Cain base relic (again, thanks to Andrew's Box Break), and an Ian Kinsler base relic and mini relic framed.  These are but few of many.

While in Dago, I knocked another stadium off my "To-Visit" list - Petco Park.  We watched the Padre's beat the Brewers.  Low scoring yet wild game.  Carlos Quentin hit a monster home run (watch it here) that was officially measured at 397' but would have landed about 450 feet had it not been for the building.  The game ended on a runner interference call at the plate.  Strangest thing I've ever seen.  Anyway, here are some pics from the stadium. 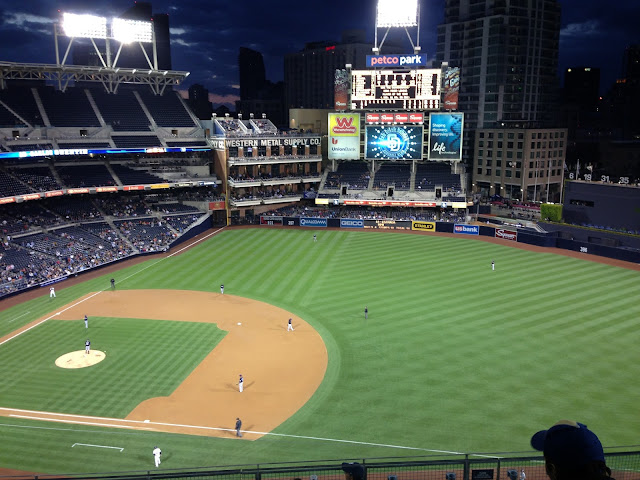 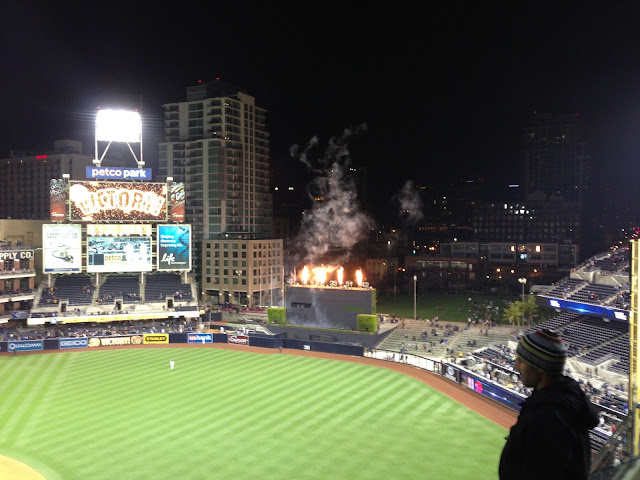 Why I Should Never Go To A Card Shop

I live on the outskirts of the Dallas-Fort Worth Metroplex, which means that the closest card shop is about an hour and a half away.  I'm about to leave for San Diego for a week for vacation, so I thought I would hit up the card shop before I left.  $150 later, I have some pretty solid hits, plus I'm pretty sure my base collection is complete.  Here's what I got: 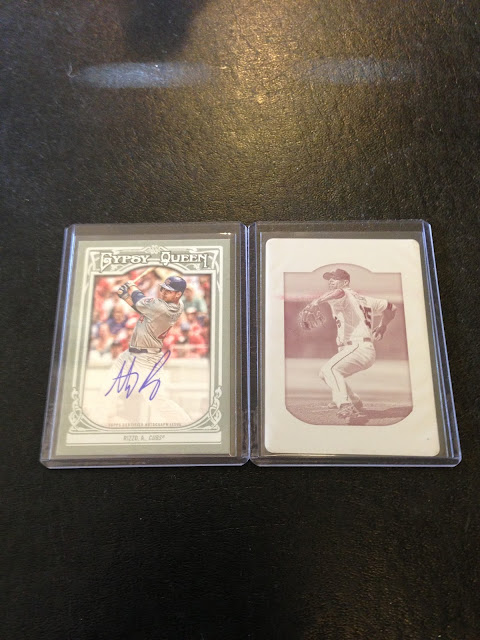 These are probably the best two hits I landed.  On the left is an on-card auto of Cards first baseman Anthony Rizzo.  He is going to be a stud soon.  Mark my words.  On the right is a 1/1 magenta Printing Plate of Braves hurler Tim Hudson.  I know I'm trying to collect as much as possible of this particular set, but this one could find its way to eBay or could be included in a trade.  Let me know what you think I should do with it.
Read more »
Posted by J. Meeks at 4:45 PM No comments:

I received my first TTM (through the mail) response today.  I'm trying to get signatures on each base card for my 2013 Gypsy Queen set, and today I crashed an burned.  Here's what I received from Adrian Beltre: 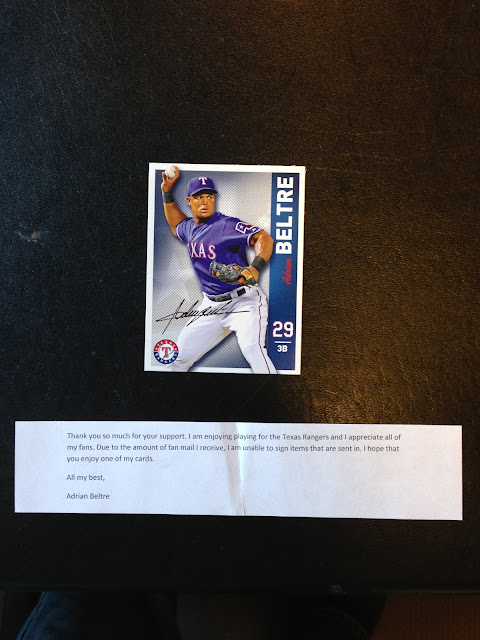 Needless to say, a big disappointment.  Oh well, that's life.  I'll just have to figure out another way to get it. I got this piece today - a 2013 Gypsy Queen Mike Napoli Framed Mini Relic.  I'm more than excited about this piece, but also bummed about it.  I love the Texas Rangers, and I have never placed a player above the team.  When they leave or they are traded, I understand that it is a business and I wish that player well (unless the player is CJ Wilson or Josh Hamilton). But when Napoli signed with Boston, I was crushed. He epitomized everything that the Rangers are: a hard worker, gave 110% effort, loved the team and the city, loved the fans, played hard - in other words, he was a gamer.

So, this card is a keeper- nothing could convince me to let it slip away.  Apologies for my emotional gushing!

I went to Wichita Falls, Texas, today for a meeting.  While up there, I stopped in at the Collector’s Den, the only card shop in the city. I was hoping to get my hands on a hobby box of Gypsy Queen to work on my set, but someone (one person) had already purchased everything he had – TWO CASES!!!  That’s nuts!
However, while I was there, I spotted this beauty for a mere $25: 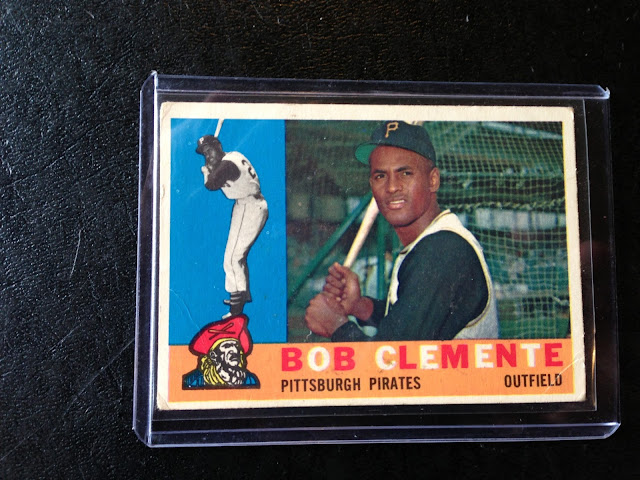 I’m torn on this one.  I’m definitely sending it in to get graded (I’m guessing a 3 or 4 grade, due to creasing and fraying of the edges). But I’m not sure if I am going to keep it or trade it away.  If you want it, make me an offer – maybe there is something out there that I can’t resist.
Posted by J. Meeks at 7:56 AM No comments:

Some recent additions to my 2013 Gypsy Queen set

Right now, my focus has been building a set of 2013 Gypsy Queen cards, including inserts, relics and signatures.  Not going to be easy (or cheap) to get one of everything, but it’s worth a shot, right?
Here are my latest additions to the relic set.  An hour on eBay netted me these Ranger relics, and I still have a couple to come: 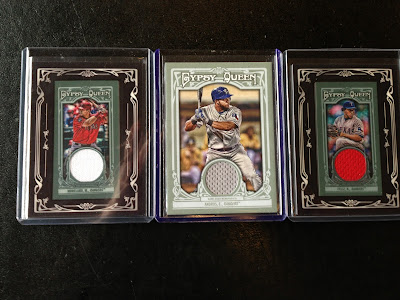 I also received some cards from William over at foul bunt.  He sent me these gems for a 2013 Gypsy Queen Adam Jones Mini Framed Relic. This is way more than I expected, so William, if you’re reading, I am working on putting together some more stuff to send your way! 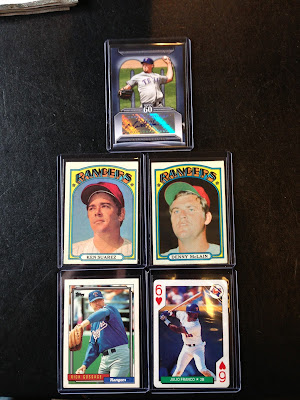 Lately, I have found myself getting back into my first true childhood hobby – baseball card collecting.  It’s becoming a habit, purchasing packs every time I go to the store, searching ebay for cards I’m missing a rare hits…I’ve got the fever.
I originally thought I was just going to make a new page for my other (out-of-date) blog (that is going to be revamped soon), The Infield Grass.  But, after some consideration last night, I’ve decided just to start this blog in an effort to keep my love of the Rangers separate from my love of baseball cards.
So, in the coming days, this blog will be worked on and tuned to be my depository of baseball card glory.  Feel free to take a look around.
Posted by J. Meeks at 7:44 AM No comments: