During the Thanksgiving holiday, I had to run to the grocery store to grab a few things for our family dinner. In my town, that means I had to run to Walmart, as there really isn't much competition.

I decided to check the card aisle to see what was available. I noticed a box of Archives, and I was hooked when I saw the term: "1 guaranteed auto per box." 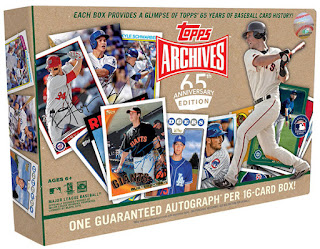 I grabbed a box and almost choked when I checked out, as it was priced at $24.99 (I did not pay attention to the price on the aisle).

I was even more upset when I opened the box. Of everything I pulled, only two cards warrant a discussion, and only because one was the auto and the other a "parallel."

Let's start with the parallel: 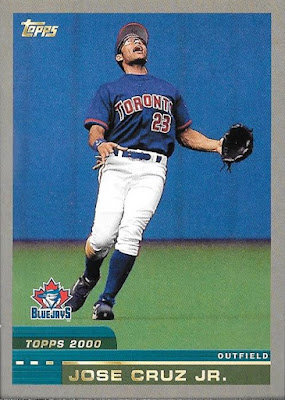 I didn't think to scan the back, but it is a red back parallel numbered to 50. I'm sure somebody is a Cruz fan, but I'm not one of them.

As for the auto: Nothing against Scott Hatteberg, but I think I would have preferred a Chris Pratt auto (see what I did there?).

Still trying to catch up on my posting. Last month, my LCS had a Black Friday sale. I was home for Thanksgiving, so I missed it. However, I made a point to visit when I returned to Lubbock. The only box he had left over was a box of 2014 Panini Prizm Perennial Draft Picks. I'm not much for logo-less cards, but I couldn't pass up the deal.

The box had a good bit of color. I snagged three colored prizm parallels: 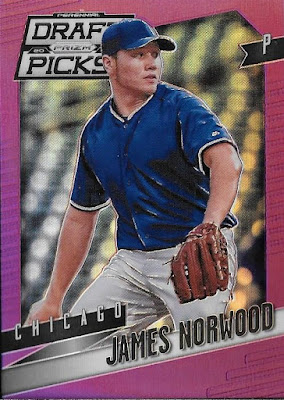 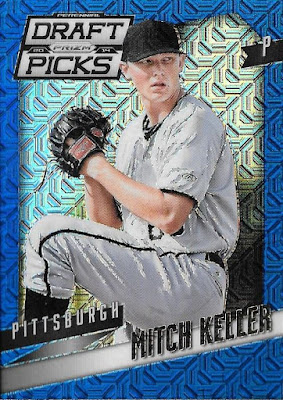 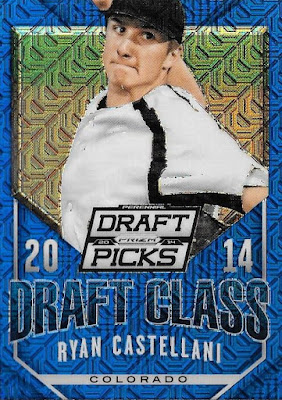 I've heard of Castellani, but the other two are foreign to me. I looked up Norwood, and I now feel sorry for the guy. He shares a name with a European footballer (i.e. soccer player) who dressed up in blackface for a team party. Not a great look.

My box also had four autographs. 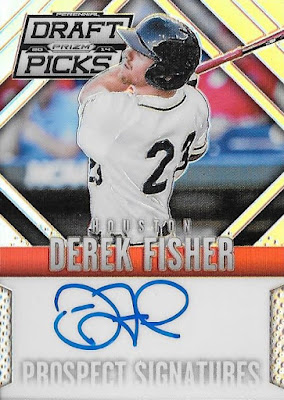 I've definitely heard of Derek Fisher. This is a base Prizm auto. 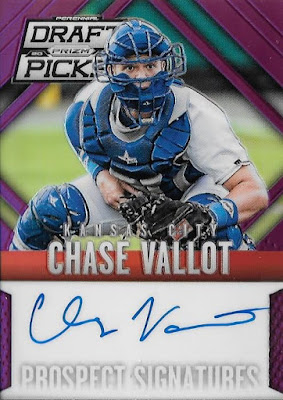 This is a Purple Prizm auto of Royals backstop Chase Vallot. Never heard of him, either. 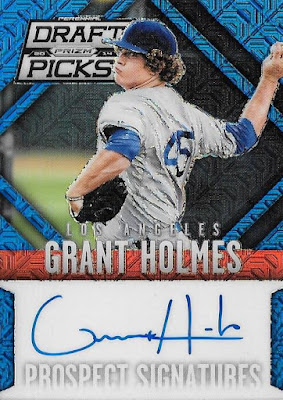 This is a blue pulsar auto of former Dodgers' farmhand Grant Holmes. I've actually heard of Holmes. This card probably had a lot more value before he was traded to the A's.

And the final auto: 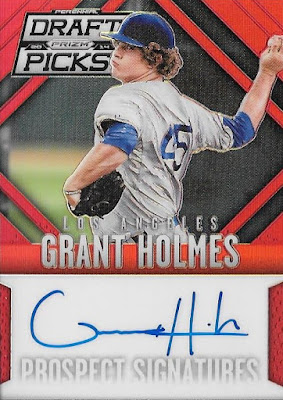 Another Grant Holmes! This one of the red prizm variety. It was a Holmes hot box!!!

Not bad for what I paid for the box. It was a fun break. All of the cards shown in this post are officially up for trade!
Posted by J. Meeks at 5:55 PM 1 comment:

Topps Sent Me a Christmas Gift

You may have seen a few of these posting up on Twitter and other blogs, but I'm going to go ahead and share just in case you haven't.

I checked my mailbox earlier today and found a Christmas card from Topps. 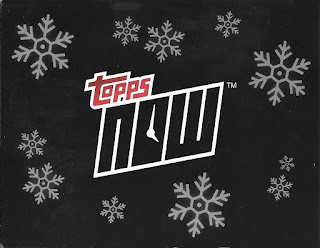 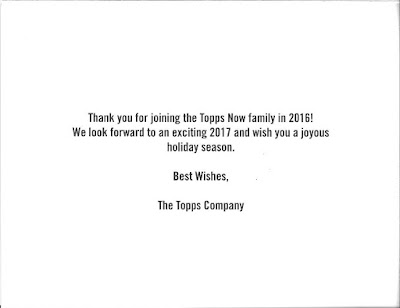 Included with the Christmas card was an actual card. More specifically, a Topps NOW highlight card: 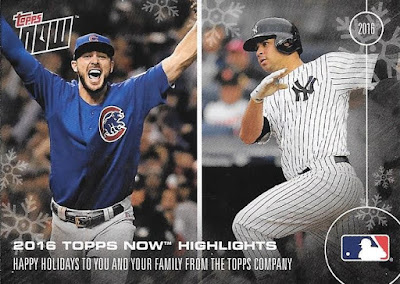 Naturally, the card would feature the Cubs, the Yankees.... 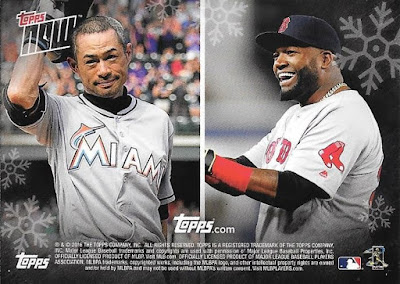 ...and the Red Sox. Nice to see a nod to Ichiro included, also.

Now don't get me wrong, Kris Bryant represents just about everything that brought the Cubs their first title in more than 100 years. And I understand acknowledging Big Papi, as this was his last season. And Ichiro is, well, inhuman......

I don't hate Gary Sanchez, I really don't. What he did this year was incredible. But aligning that with the other three moments featured on the card isn't quite right. To me, the other moments represent a culmination of events: careers for Ichiro and Ortiz and an entire century (and more) of waiting for the Cubs.

So, you ask, what would have been more appropriate for the card?

Well, including this guy would have been my first choice: 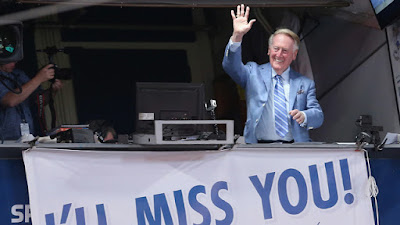 Of all of the people retiring, I'm not sure many represent a true history of the game in the way that Mr. Vin Scully does. The man has made some of the most iconic calls in the sport's history. Scully represents the final tie to times of old. With him gone, the sport has lost it's history's keeper, essentially.

I didn't sit down to criticize Topps for their card design; the thoughts came to me as I was typing. In reality, I think it is a very kind gesture by the company to send out these cards to everyone who purchased a Topps NOW card. We often spend a good bit of time complaining about Topps, but on occasion, they get something right. This is one of those times.

I turned in my last final a couple of hours ago. I turned in grades for the class I taught a bit earlier in the day. What does that mean? I'm officially done with the semester!!!

Well, I have a bunch of research to do over the break, but that's the life of an academic. Always trying to plan ahead for tenure.

Regardless, this is the first opportunity I have had in a while to post. So I'm not going to miss the opportunity.

A wihle back, I threw some cards into my LCS owner's PSA order. I got them back a couple weeks ago, and I was stunned.

First up, I included this Phil Bickford team omission auto from '16 Heritage Minors: 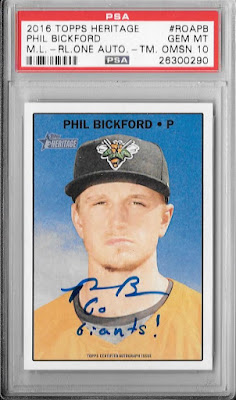 The guy had some promise, but was suspended for the first 50 games of next season for his second failed drug test. C'mon, man....I hope he gets his act together. Drugs lead people down bad roads.

Next up was this Tyler O'Neill green bat variation from 2016 Heritage Minors: 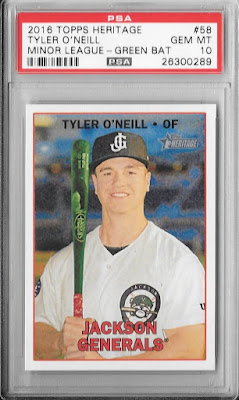 I don't know much about O'Neill, other than that he is supposedly one of the Mariners' top prospects. MLB.com ranks him as #2, behind Kyle Lewis. This leaves me in a dilemma: I want him to do well so the card increases in value, but, as a Mariners prospect, I also want him to fail miserably (relax, I don't really want him to fail...I just don't want him to succeed against the Rangers).

Next up, Jon Daniels GM Signature card from 2012 Topps: 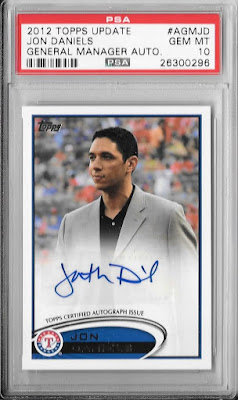 This is one of my favorite cards in my collection. I wanted it for a while before I finally got it. When I got back into collecting, the first auto I pulled from flagship was the GM auto from now-former DBacks GM Josh Byrnes. It was one of the pulls that brought me back to the hobby.

Lastly, I sent in my Cole Hamels Real One auto from '16 Heritage: 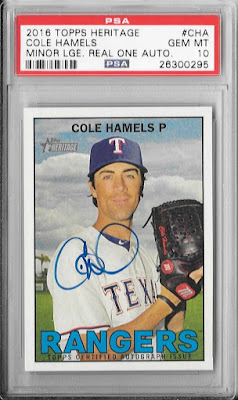 Anyone see the problem with this?????

For some reason, the grader at PSA decided that Cole Hamels was demoted and listed this as a Minor League Real One Auto. 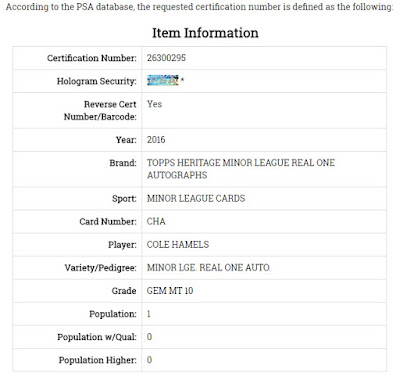 I just double checked, and PSA still has it listed with the error. eBay 1 of 1, anyone??? But seriously, is there an eBay market for PSA errors?

Anyway, back to the main story. The thing that shocked me about this order? All of my cards came back Gem Mint 10s. That's kind of crazy, right? I'm definitely not complaining.