In my last post, I mentioned that I would be giving away a pretty sweet Kyle Lewis dual patch relic along with 150 Panini Points. I meant to do the drawing Friday, but I was "lucky" enough to come down with a virus and spent Friday, along with the weekend, recuperating.

I finally felt well enough to jump online and put together a post recognizing the winner tonight.

We had three entrants, so I randomized the list three times.

Ketchupman36 a.k.a. The Cardboard Flame!

I'll reach out to you and get the cards in the mail!

Thanks to everyone who played along!
Posted by J. Meeks at 7:31 PM 3 comments:

Email ThisBlogThis!Share to TwitterShare to FacebookShare to Pinterest
Labels: Contest

During the course of the past couple years, I've been setting aside any Corey Seager cardboard I pull. I carefully sleeve each one and then place them in a top loader. After a small stack builds, I send them off to Greg of Plaschke, They Sweater is Argyle.

In return, Greg goes way overboard. Whereas I send mostly commons his way, he returns the favor with cards like this: 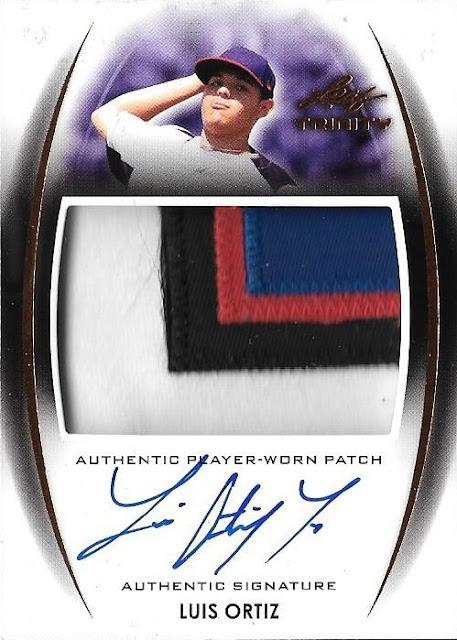 A massive patch auto ( and on-card, at that) featuring former Rangers first-round pick, Luis Ortiz Jr. from 2014 Leaf Trinity. This card is an absolute beauty.

I was sad to see Ortiz traded. He was part of the group of prospects sent to the Brewers to acquire Jonathan Lucroy. I was certain he would be a solid number-three starter for us. Instead, he made his major league debut with the Orioles last season. He was rouged up pretty badly in that start and accompanying appearance.

However, I owe a long-overdue "Thank You" to Greg for sending this my way. You always go above and beyond to send me some incredible cardboard. I am very grateful to consider you a friend, good sir!
Posted by J. Meeks at 10:00 AM 3 comments:

Back in December, my scanner went bonkers. At least, I thought it did. Last week, I was working on my dissertation when my laptop started going crazy. It turns out that my laptop was the problem, as it was creating issues by misreading external hardware code...or something like that. The repair guy tried telling me, but I openly admit I don't speak tech.

What I do know is that I had to get a new laptop. Late last week, I did just that. I hooked the laptop up to the scanner and everything seems to work!

I scanned in some cards and then opened Blogger...and realized it has been more than two months since I last posted. Wow. Granted, I was having issues scanning, but if I'm being honest with myself and you, I must admit that I didn't have the motivation to blog, anyway. Last year was a tough one for me. I won't re-hash everything that made it that way, but I am glad it is over. One of my personal goals for 2019 is to work harder on being more optimistic and to not let minor setbacks turn into major roadblocks for me. Part of being more optimistic and happy means spending more time doing the things I enjoy. So, today I write.

The fourth blaster of my Blaster Madness series features two blasters of 2019 Panini Elite Edition. This is the first Panini baseball product of the year (I believe) and features many of last year's drafted players, most of the various USA National Team players, and many unsigned foreign (specifically Latin American) players. Each box contains five tota cards, two of which, on average, are hits (autographed, memorabilia, or autographed memorabilia cards).

I snagged two looking for a specific player, but more on that later. For now, let's see how I fared. 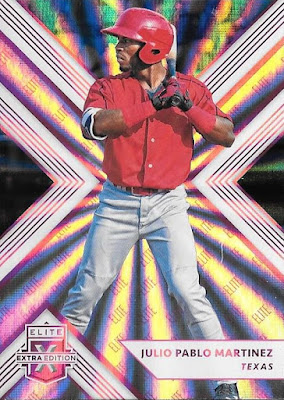 Each box also contains one exclusive pink parallel. One of my pink parallels was of Rangers' prospect Juan Pablo Martinez. Sadly, this was my only Rangers card. Martinez was signed early in 2018 - with money the Rangers tried to give to Shohei Otani before he signed with the Los Angeles Devils - and was MLB.com's second-ranked international prospect going into the 2018 season. He split the 2018 season between the Rangers' Dominican Summer League team and the Spokane Indians. 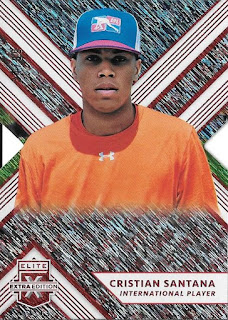 This is the only numbered parallel in either of my boxes, and it happens to be the die-cut version numbered to 99. Appearing on the card is Cristian Santana, international free agent, not to be confused with the man of the same name in the Dodgers organization. I couldn't find much info on this Santana. 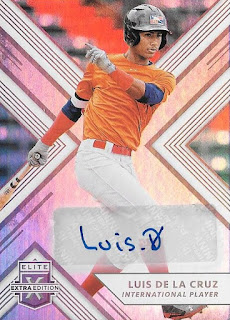 The only autograph appearing in either blaster is of another international free agent, Luis de la Cruz. It's autographed and it's legible, so it is automatically better than 95% of current autos, though it still isn't impressive. Again, I couldn't find much info on this player. 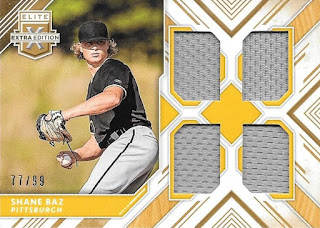 My first relic appears as a quad relic of Shane Baz. Baz was a first round pick of the Pittsburgh Pirates in 2017, going 12th overall. He was traded to Tampa Bay last year as a PTBNL in the trade that sent Chris Archer to the Steel City. 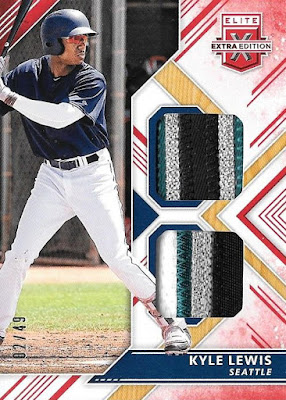 The second relic I found featured two swatches from Kyle Lewis. Lewis was the 11th overall selection in the 2016 draft, going to the Mariners. Can we talk about these swatches though? How often do you see a card numbered to 49 have such amazing swatches? Beautiful! 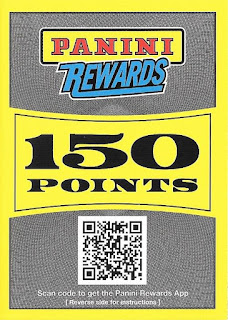 So there it is! I've decided that I am going to give away the points AND the Lewis relic. All you need to do is post about your favorite memorabilia card in your collection and then post a link in the comments below. I'll create a recap of the posts and then select a random winner from the comments! Don't have a blog? No problem! Tweet about your favorite memorabilia card and post a link to the tweet in the comments! The contest runs until February 22 at Noon central time. Ready, set, go!
Posted by J. Meeks at 10:00 AM 10 comments: