In case you missed it, 2017 Topps Heritage Has been really, really good to me. So when my LCS owner sent me a text yesterday to let me know he got his '17 High Number in a day early, you know I was all over it.

I opened the box and, as is my custom, began by opening the first pack on the right. I don't know why I do it that way - I'm a creature of habit.

Anyway, the very first pack offered up my guaranteed hit: 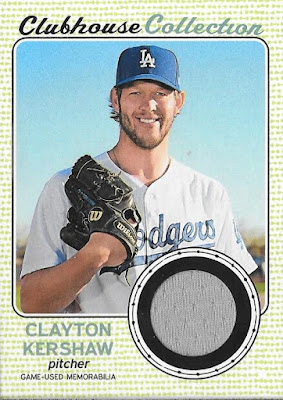 After that, I noticed this guy: 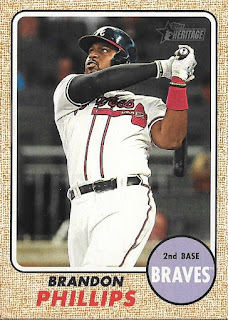 This is the image variation of Brandon Phillips' card. Not as nice as the action variations I pulled earlier this year, but I won't complain.

I also saw this in my box: 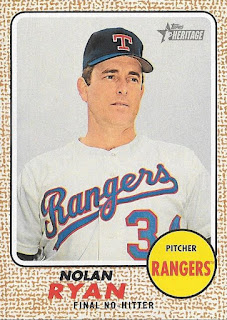 Evidently, Nolan has his own insert set centered on his career accomplishments. That's pretty cool.

I also pulled a blue parallel: 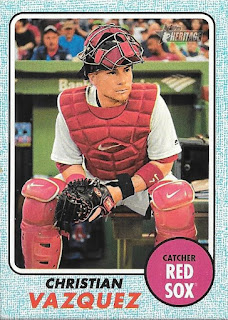 I know nothing about this guy other than he plays for Boston.

While opening the last pack in the middle "column" of packs in my box, I found something weird. As a superstitious person, this made me a bit uncomfortable. 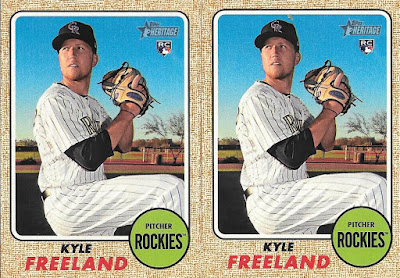 These were the first two cards in the pack. Exactly the same, front... 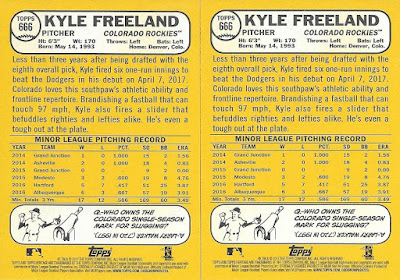 ...and back. In case you are wondering why this made me uncomfortable, check out the card number. I've never had a problem with collation in a Heritage product, so it was odd for me to find this in a pack. Even more strange (or coincidental) is the card numbering. I don't like it and I wonder how it happened.

Anyway, I was plugging along until I was opening the next-to-last pack. I opened it and saw a thick card. Once again, I assumed it was going to be a '68 Mint card.

Once again, I was wrong. 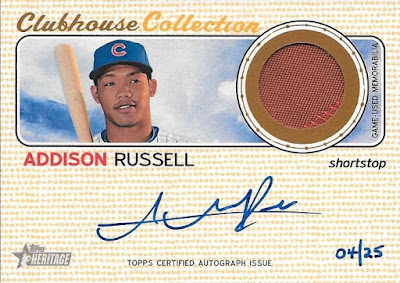 Another Clubhouse Collection relic auto card, this time of Addison Russell! It's no Mike Trout, but the relic is far superior. How sweet is that?!?!?!

Anyway, now I am debating buying another box. I know it's foolish, especially considering that don't need that many more cards to complete the set. But landing a big fish will do that to you.

Side note - I have a few posts in my queue waiting for scans. If you sent me something, please don't think I forgot you - I just haven't had enough time to scan everything yet!!!
Posted by J. Meeks at 3:55 PM 9 comments: