Last week, I shared the various parallels I found in my two boxes of Triple E. Today, let's take a look at the hits.


That's a lot of ink. If I am being honest, I have never heard of many of these prospects, though a few ring a bell. Regardless, it was still a fun break and the cards are beautiful and colorful. I am happy to have all of these in my collection!

A brief post, but sometimes those are the best kind.

A couple of months ago, I bought a couple boxes of 2018 Elite Extra Edition. I was (and still am) on the hunt for a specific player that was featured in the product, but more on that later.

When I got back into collecting, I stayed pretty far away from Panini. I'm not a fan of the logoless cards. However, some products feature players in either their college threads or Team USA uniforms. I can get down with that. I opened a box of 2016 Elite Extra Edition a couple years ago and enjoyed it. Let's see if this year is similar.

PS - There are a ton of parallels, so I'm not necessarily going to have commentary on all (or any) cards.

Not too shabby. Lot's of color. I'm a big fan of the sparkly die-cut cards. Also, a couple of the kids featured on the international block look like they can't be more than 12 or 13 years old.

I'll be back early next week with the hits portion of the break.

My last post discussed my desire to try and get more value from seven blasters of 2019 Bowman than I would a single hobby box (seven blasters run about the same as a hobby box, in terms of price). If you read that post, then you know I feel like I did pretty well and got enough value from those four blasters to cover the hobby box.
Let's take a look to see if my final three blasters paid off.

Right off the bat, I saw green. 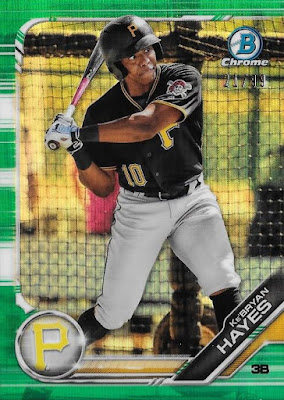 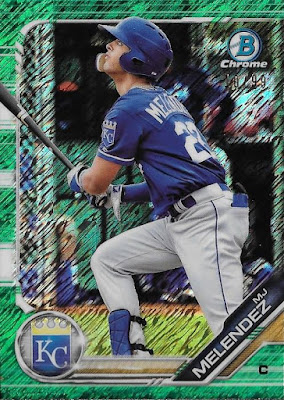 Well, I guess that counts as a win! Not a Ranger, but a green shimmer refractor of the Royals' MJ Melendez was in the second blaster. Both of these are numbered to 99. 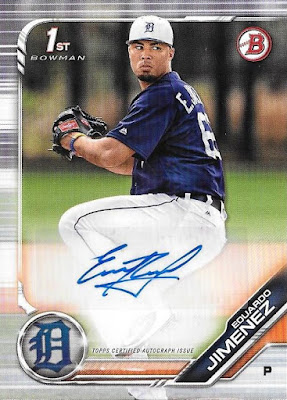 The first blaster also provided ink. This base paper (sticker) auto of Eduardo Jimenez was in the next to last pack. I know everyone seems to be big on the Chrome autos, but I really appreciate and like the retail paper autos more. I don't really know why, I just do. I just wish they were on-card. 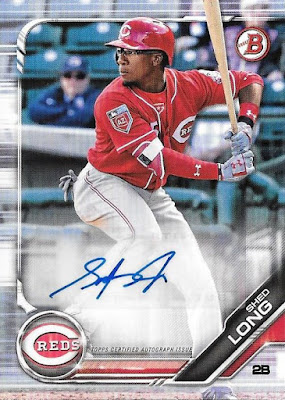 The second blaster also gave me ink, in the form of this Shed Long base auto. First, heck of a name. Second, two refractors and two autos in two blasters?! Definitely a win!

If you are keeping track at home, you are probably asking, "What was in the third blaster?!"

That's right, nothing of significance was in the third blaster. All base, no color, no extraordinary inserts. But hey, after two blasters like these above, you don't complain about a barren blaster.

So, after seven blasters, the final count stands as follows: three autos (one green refractor numbered to 99, two base paper), two refractors (green and green shimmer, both numbered to 99), one colored paper (blue paper, numbered to 150), and two insert parallels (gold refractor to 50, atomic refractor to 150). Not included in any of this discussion are the coveted "1st Bowman" base and Chrome cards.

I went back to the store a couple of days later and decided to get the two remaining blasters. So, as an added bonus, let's see how I did with those. 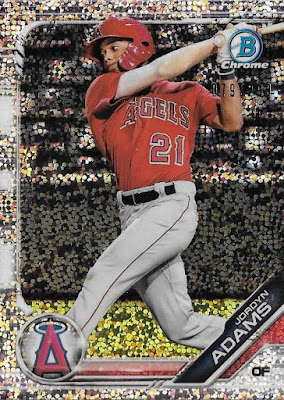 I'm really not sure what to call these. A speckled refractor? A disco refractor? Either way, this one features Angels' first-round pick Jordyn Adams. 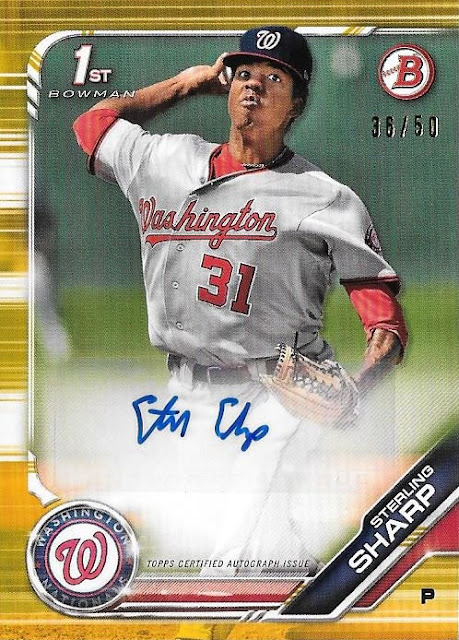 A gold paper auto of Sterling Sharp, numbered to 50! Nice! These blasters are killing it! Massive win!

So there you have it. If you ask me, the way to go with 2019 Bowman is definitely the retail blaster route. I hope you enjoyed reading along!
Posted by J. Meeks at 1:19 PM 2 comments: