I'm Back With A Burning Question

I've been MIA for almost a week, My dad got an infection and has been in the hospital, so I drove back to Dallas to be with him. After a few scares, it appears everything will be okay and he is scheduled to be released tomorrow.

While driving to Dallas, I listened to a lot of podcasts. I'm a history and politics nerd, so there were quite a few of those (if you are right-leaning, I highly recommend The Federalist Hour - it's great!). I also listened to Buster Olney's podcast. I don't really care for ESPN, but I do like Olney and Timmy Kurkjian.

During the show, a very important question arose, and I want to see what you think:

If you were in the big leagues, what would your walk-up music be???

Epic question, right? So, what's your answer? Do you pick a song that everyone knows? Do you go with something funny so everyone gets a smile? Or do you pick something that gets you psyched up?

For me, I want something to give me a shot of adrenaline. If I had to choose today, I think I would pick "Throne"by Bring Me The Horizon. I would pick a different BMTH song, but it isn't exactly family friendly.

The First Top 5 Most Wanted Of 2016 Is Captured 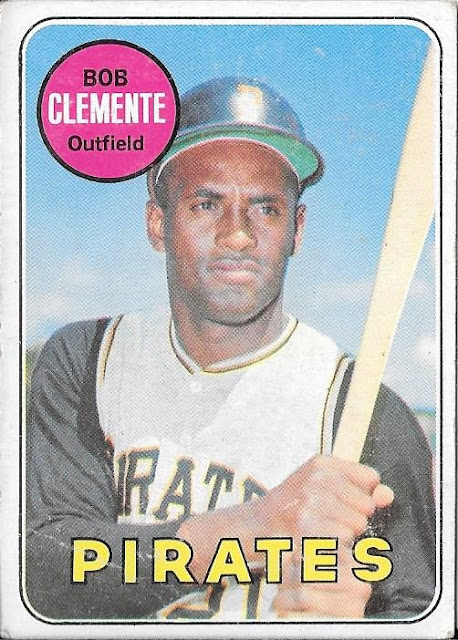 1969 Topps #50 Bob Clemente. It's in pretty good shape, considering the age. The corners are rounded a a bit frayed, but it is perfect for me.

The card is also another one of the uncorrected errors from the set. Can you find it? 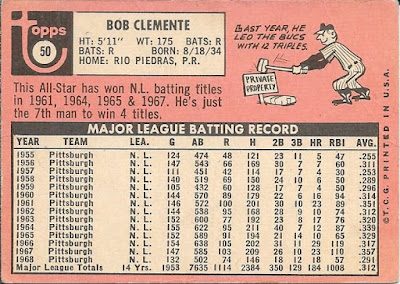 Look in the information box. "BATS: R" is listed twice.

This is a quick post, but not because I have a Valentine's date. Since I'm recently single, I'm spending the day drinking my sorrows away! That's not true. I'm actually writing this on Friday (the 12th), so that I can go home for the weekend. When you read this, I should be building some large garden planters for my grandmother.

Sometimes, you just can't help yourself. Your mind says, "NOOO!" but that little devil inside tricks you.

Such was the case for me last week, as I bought a hobby box of '16 Series 1 to accompany the jumbo box I already bought. If my jumbo box was disappointing, then this hobby box was a disaster. Well, sort of.

I found a parallel in the box, this of the black variety: 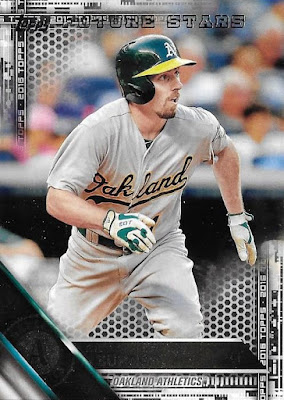 I also pulled a relic, and it sort of fits in my collection: 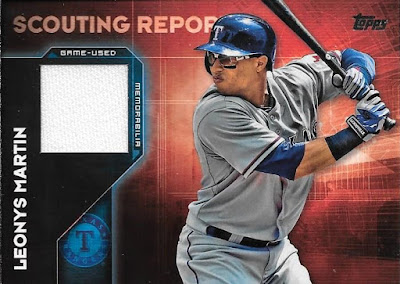 Leonys Martin Scouting Report relic. Martin had such promise here in Texas. He had unquestionably the best outfield arm in all of baseball the last two seasons, but he just couldn't swing the bat well enough to stay in the lineup. Add in his temper tantrum leading into last year's postseason (he refused to go to Arizona to stay ready in case he was needed in the playoffs), and the moment was right to trade him. He was sent to Seattle over the offseason.

So, that would be a pretty damned disappointing box. However, there was one more card that might had saved it...I'm still not sure. 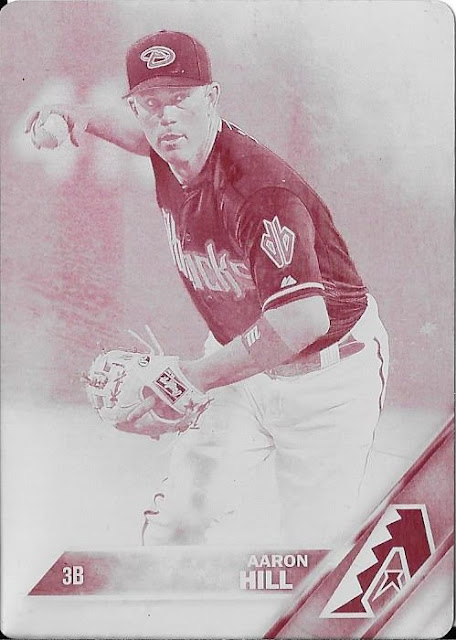 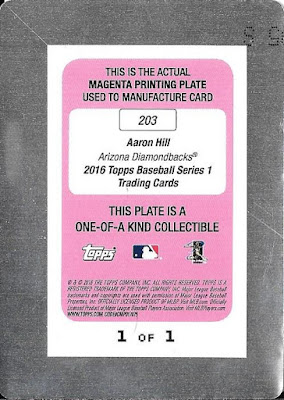 This is the fourth printing plate I have pulled (I pulled a 2012 Bowman Draft black plate of Jorge de la Rosa, a 2013 Gypsy Queen black printing plate of Tim Hudson, and a 2014 Bowman Platinum plate of Delino DeShields). I always say I'm going to keep the plate, and I always end up trading it or selling it. Needless to say, the plan for now is for me to keep this one.

A few weeks ago, I decided to change up my TTM style. Rather than a card, I decided to send out a couple 8x10 photos. Well, I received one back in the mail today: 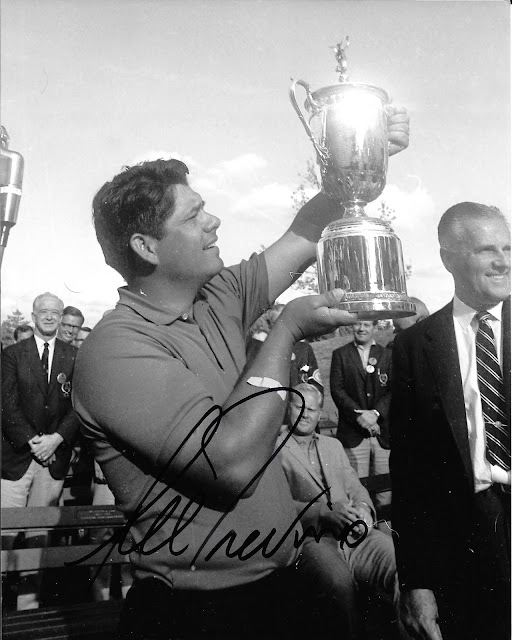 This photo is of the trophy ceremony from the 1971 (British) Open Championship. You see the champion, Lee Trevino, hoisting his trophy.

The Merry Mex, as he is known, is quite the character. He likes to laugh and have a good time, so he is always joking around, both with other golfers and the fans in the gallery. As a matter of fact, he once cracked a joke that if he were caught in a storm while out in the course, he would hold a 1-iron to the sky because "not even God can hit a 1-iron." He was struck by lightning the next week. To add to the humor, he was struck two more times in his life, and has corrected himself saying "I deserved it...God can hit a 1-iron."

Trevino is also known for the Bandaid he would wear on his right forearm. The Bandaid didn't cover a wound; rather, it covered a tattoo of the name of his ex-wife. The tattoo has since been removed.

If I could change one thing about this photo, it would be the signature itself. I sent a blue Sharpie for him to use, but it appears he used the pen he had most readily available. However, I still love it - I'm not going to honestly complain when one of the greatest golfers of all time takes a moment to sign a photo for you.
Posted by J. Meeks at 9:32 PM 4 comments:

I've got a fever, and the only prescription is more cowbell....

Okay, so I don't have a fever. More like an irritating itch...

You know what, I'm just going to stop there. Too many ways this can turn into one nasty joke.

Anyway, I really want to do a group break. I haven't done one in a while. I know not everyone has been interested in the products I have wanted to break, and that's totally cool. However, I wanted to throw this out there to see what you had to say.

What if I did a mixed product break? Here's what I am thinking. One box each of:

If the break  consisted of 1 box of each product, and each participant had a team they selected and another that was randomly assigned, the total cost (including shipping) would be about $25. If we wanted to open two boxes of each, each spot would be about $45.

So my question is this: who is interested in this break?

Next question: who would be interested in a similar break, just with different products? If so, what products would you prefer?

I have really grown to really dislike the USPS, and that is putting it mildly. The cost to mail something is getting crazy, and the government organization itself is one of the most inefficient, money wasting institutions in our country.

As many of you know, mailing prices recently went up. My rant aside, that means that my eBay purchases need to be a bit more efficient. I have begun to search for multiple cards from sellers to save a bit on shipping.

This was the case with my most recent purchase. I snagged a couple cards for the Ranaudo PC:


My scanner doesn't do the last couple cards justice, especially the Rua.

All this talk about being efficient on eBay, and I still managed to buy a single card from another seller without looking for others: 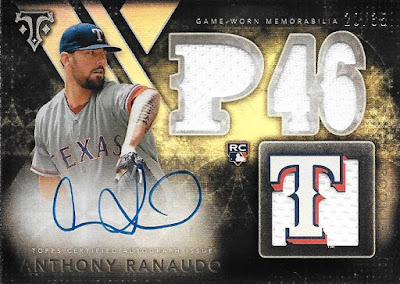 Also from Triple Threads, this Phenom Auto Relic is the black parallel numbered to 35.

That's it for the evening. I'm a bit exhausted after watching the Superbowl...as a Peyton Manning fan, it was an emotional night knowing it was probably his last game. Good night everyone.

After telling myself I wasn't going to buy any '16 Series 1, I broke my word. I saw everyone opening it up and I could resist. I already promised my LCS owner that I would bring him some base for his shop, so after worked out a deal for it, I had a bit of change to put toward the box.

I kind of wish I would have invested in something else.

But no crying here. Let's take a look at what I pulled. 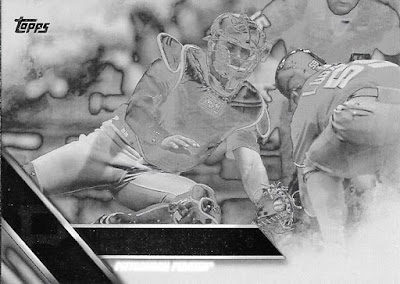 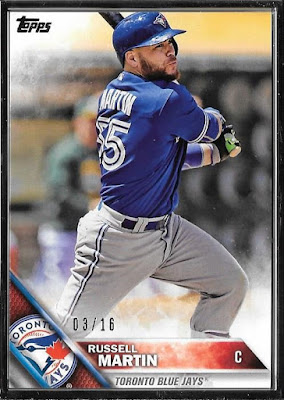 First, the parallels. On top, the "negative" parallel for Francisco Cervelli, not numbered. Below, a framed parallel of Russell Martin, numbered 3 of 16. The negatives are...well, I don't know how I feel about them, honestly. Still not a big fan of the framed parallels. but I do like that the numbering is lower this year. Not pictured: I only pulled one gold parallel in my entire jumbo box. That ind of pisses me off.

Next up: the relics. 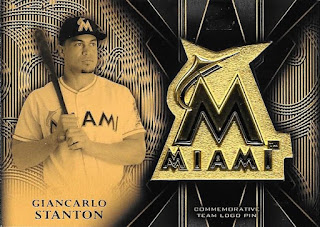 Once again, Topps laughs as it shoves one up the south end of the collectors. When something is manufactured, it is not a relic. At no time has the player interacted with the manufactured "relic." Whatever. This is the Giancarlo Stanton team pin. 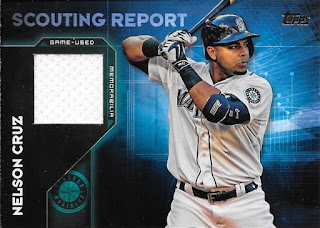 Oof. Nelson Cruz Scouting Report relic. I wish Cruz still played for the Rangers. We could use his bat. 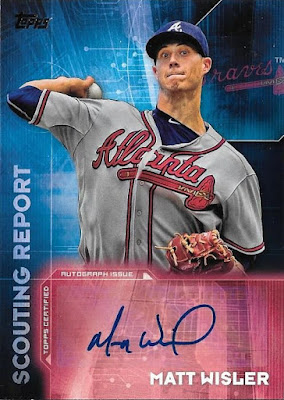 My guaranteed auto came from Padres Braves pitcher Mat Wisler. With the history the Braves have with pitchers, I am pretty sure I am going to hang on to this one for a while.

This year, the boxes also offered buybacks. Unlike previous years, the buybacks were tiered. The tiers were identified by the color of the stamp. My first buy back had a black stamp (the most common form). I can't even really remember who it was. However, the second buyback had a Silver Stamp, meaning it is scarce (the only version more limited are the gold stamped 1/1). Here it is: 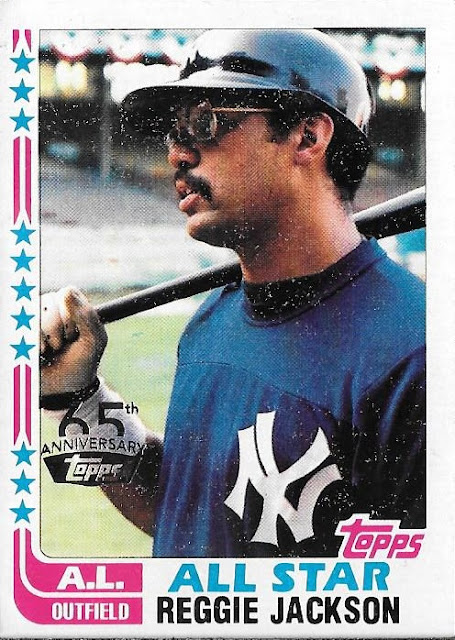 I know the stamp looks black in the scan, but trust me - it's silver. This is definitely the best buyback I have ever pulled - by far. Granted, it's from the '82 flagship, but it's still Mr. October.

Well, that's it. Nothing exciting, just a cardboard box full of regret.
Posted by J. Meeks at 10:46 PM 11 comments:

A relatively brief post as I'm home on my lunch break and have to get back soon. I received my first TTM earlier this week while I was out of town: 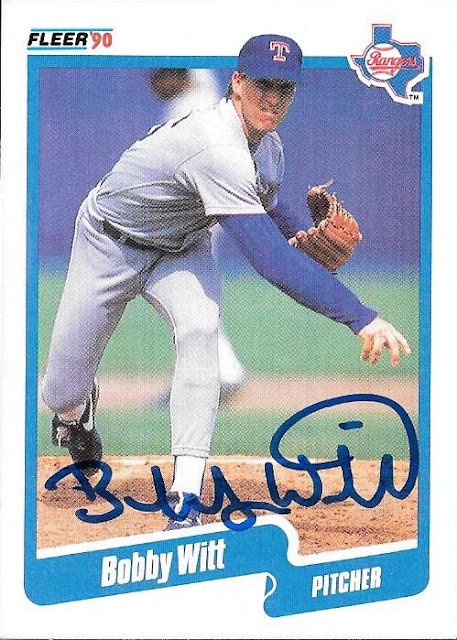