For the second installment of Blaster Madness, we take a look at 2018 Bowman Platinum. In terms of number of Ranger cards pulled in a single blaster, this has to be one of my better boxes. Let's take a look. 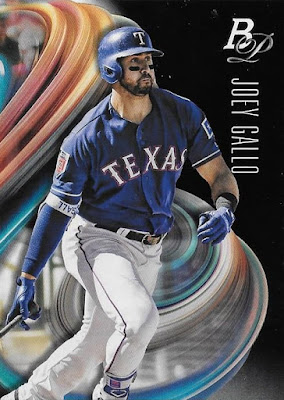 First pack Gallo mojo! When I first saw the cards, I thought I really liked them. Now that I've had some time to see them, I'm not sure I really care for the design. What are your thoughts? 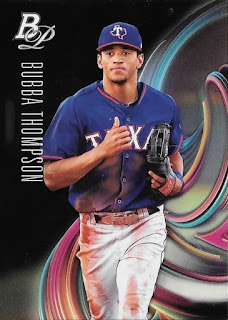 Bubba Thompson was a 2017 first-round pick for the Rangers. I don't know much about him, but the talking heads that do know their stuff seem to think he will be a very important part of the Rangers' future. 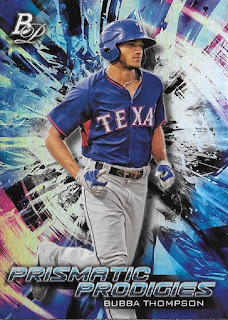 Speaking of Thompson, he is featured in the Prismatic Prodigies insert set. I actually do like these. 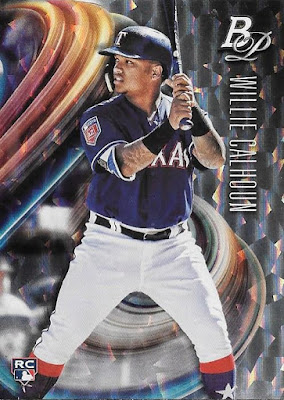 Willie Calhoun was the key player the Rangers acquired from the Dodgers in the Yu Darvish trade. He hasn't really produced for us yet, but hopefully more time in Triple A will cure that. This is a cracked ice parallel. 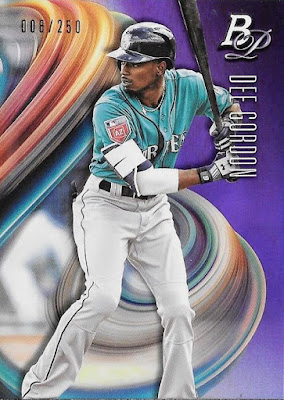 I also pulled this purple parallel of Dee Gordon numbered to 250. I like the color more than I like the plain black, but that isn't really saying a lot.

Overall, I do like this set. I'm excited to pick up the remaining Rangers!
Posted by J. Meeks at 10:00 AM 2 comments:

I (Sort Of) Won Gint-A-Cuffs X! A Post-Mortem

Okay, so I didn't actually win Gint-A-Cuffs X, per se. That honor belongs to Spankee, who clocked in with 127.5 points. Topps was kind enough to send a couple of boxes of Ginter as prizes, so I was fortunate enough to win the second box trough random selection.

The Commissioner was kind enough to send that box to me earlier this week, and I decided to go ahead and score it to see how it would do when lined up against my contest box. I didn't do a pack-by-pack breakdown, but I did list out all of the scoring cards and scan a few of them. Let's take a look! (Also, check out my concluding thoughts on Gint-A-Cuffs X and 2018 Ginter, in general, after the scoring, and see my set needs here!)

That's right, had this been my competition box, I would have really won Gint-A-Cuffs! That rip card really put it over the top. I've never had a rip card before, and I swore that if I ever did pull one, I would rip it. Lesson learned! If I ever pull another one, I'll sell it! Now let's look at some scans!

Not too shabby! Everything except the Gallo is up for trade. I only ask that if you make a trade offer, please make it fair - don't offer to send me a ton of 80's and 90's junk wax! (I had a random person reach out a couple weeks ago and ask if I would trade an auto from a higher-end product for a bunch of junk wax....)

Now for some thoughts on my boxes of Ginter for GACX. Most of my commentary revolves around collation. My first box was short a hit. I ordered a second box, and it was also short a hit. I ended up buying a third box, and it had all hits in it. So did the prize box.

Beyond the hits, I also had issues with the inserts. The first box I purchased had zero "Magnificent Moons" inserts. Instead, it had eight "Baseball Equipment" inserts. Furthermore, both the first and second boxes had the same exact "World's Best Beaches" insert cards.

Boxes one and two were clearly the problem boxes. Beyond the issues mentioned above, both boxes were nearly identical in the base cards included. Hell, the second box had the two copies of Christian Villanueva's short-printed mini (card #315). How the hell does that happen? That makes Ginter a very expensive set to build.

Lastly, it's a bit of a bummer that Topps is now treating rip cards as hits. In the past, these were included in addition to the three promised hits. I won't complain on this one too much, especially since I had a rip card in my **free** box. It was just something that crossed my mind.

Lastly, I want to specifically thank Mark for serving once again as our faithful Commissioner. Without his work, I'm not certain GACX would have happened! Also, a huge thanks to Topps for sponsoring the contest and providing prizes! As a winner (finally!), the prize was certainly appreciated!

As promised, today begins my new series "Blaster Madness." Since I've moved back home, I haven't had the opportunity to purchase many hobby boxes. My supply of cardboard comes primarily in the form of blasters from Walmart. TO say my options are limited is an understatement, so apologies if my posts become a bit...redundant.

My first offering for this series takes a look at a blaster of 2018 Topps Chrome. Let's take a look and see what I found. 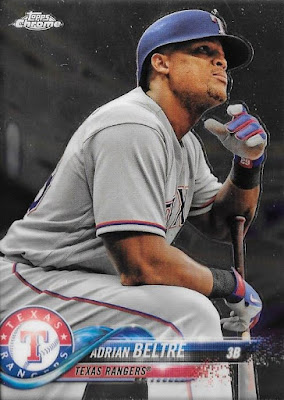 First card of note for me was Adrian Beltre. Beltre signed with the Rangers prior to the 2011 campaign and has been the most popular player on the team since. Beltre may retire this offseason - I would venture to say that he most likely will retire. However, that decision hasn't been made. I would never be opposed to having Beltre back again for another season. If I'm being honest, I wouldn't be opposed to having Beltre slide into our open manager position. I can dream right? 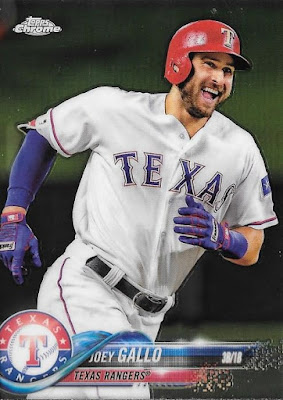 Next up is a base card for my Joey Gallo PC. I really like this card. I haven't set out to determine when the photo was taken, but it was clearly after something good happened. If I had to put money on it, I would guess that this was taken after a walk-off hit. 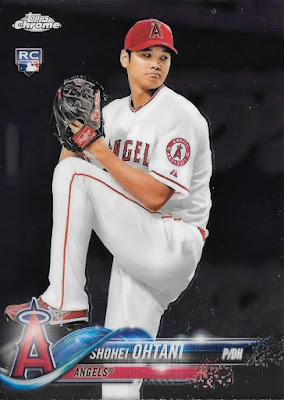 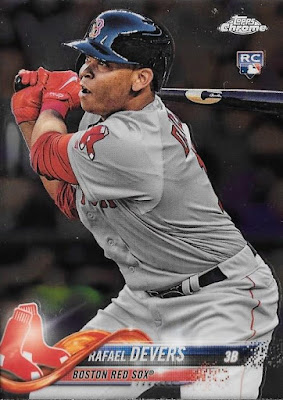 I also pulled this Devers base rookie card. I'll be completely honest: I don't know much about him, so I don't have much to say about the card. 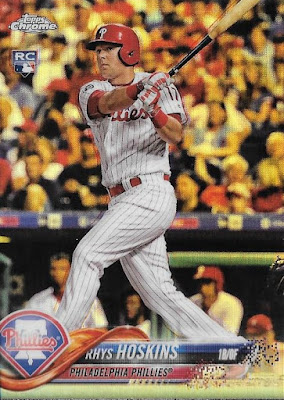 Keeping with the rookie theme, I also snagged this Rhys Hoskins rookie refractor. When I saw the "RC" designation on this card, I was a bit surprised. It feels like Hoskins has been around for a while, but I am guessing that he made his debut too late in the season last year to be included in Update, so his rookie cards are falling into this year's product. 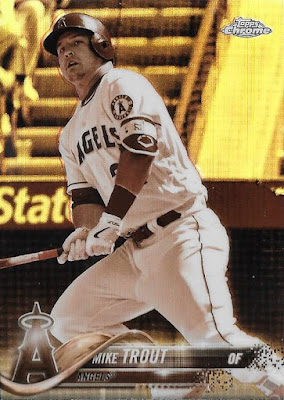 The final card of note in my blaster was this sepia refractor of Mike Trout. I don't seem to pull many refractors of Trout, so this was a nice surprise. It will stay in my collection for now.

So there it is, Blaster Madness #1. Not the best blaster I've ever had, but certainly not the worst. Thanks for reading!
Posted by J. Meeks at 1:02 PM 1 comment: