So, I Guess It's Time For Another Blog Post...

I can't believe it has been more than a month since my last post. The end of the semester got here and I buried my head in the books. I wanted to pull a 4.0 this semester, so I devoted myself to studying the material. It worked, for the most part - I received all "A's" with the exception of one "B", which my Theory professor was more than happy to send my way. I can't complain too much, keeping high grades in a PhD program is commendable, right? Okay, I apologize for the blatant call for reassurance. I'm really not that needy.

Okay, back to cardboard. When I last posted, I was talking about how I was noticing a trend of Joey Gallo cards appearing in my collection. Well, that still holds true. I snagged a couple more. 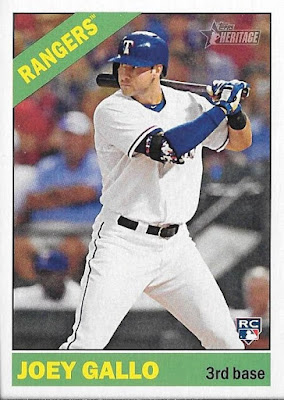 This is the action photo variation from 2015 Heritage High Number. I've wanted one of these since they came out, but they were always priced well above what I wanted to pay. Fortunately, I found one that was priced at $3 last week, and I immediately scooped it up. The card looks better than the scan, and I think I may send it in for grading (which I will probably do with all of my Gallo rookie cards). I'll let you know what I decide. 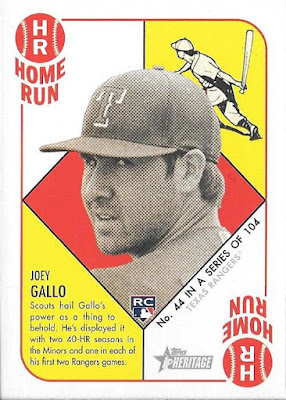 This guy hails from the 2015 Heritage 1951 Collection. It's pretty awesome, based on its namesake set. This is the base version, which means... 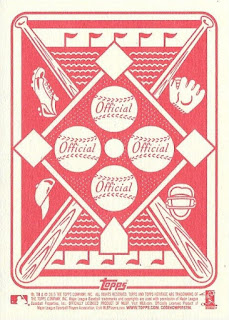 It has a red back. I know there are other parallels (black, blue, green, and perhaps more), but this is the only I have gotten my hands on. Hopefyully I can snag a few of the others soon.

But Gallo isn't the only player I've been grabbing lately. Before last season, the Rangers shipped lefty reliever Robbie Ross to Boston for Anthony Ranaudo. I don't know why, but I like him. His numbers this year weren't outstanding, but they weren't terrible. I think he has a bright future as a back-end starter, and I hope I'm right. Either way, I've been looking out for his cards, and I've managed to snag some for a very cheap price. 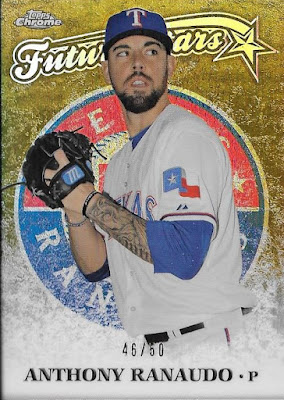 First up, this Future Stars gold parallel from 2015 Topps Chrome. This one ran me all of 50 cents, plus shipping. Numbered to 50, this is one of those cards that looks way better in-hand than it does in the scan, 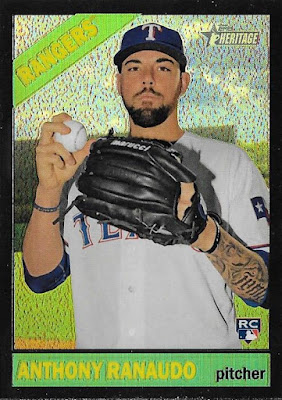 This is the black refractor from 2015 Heritage High Number. Numbered to 66, it cost me more than the above gold refractor, but still came in at a whopping $3. It also looks better in-hand; as a matter of fact, I would venture to say this card is beautiful. Glad to have it.

So there it is, my first post in a month. Feels good to get something out there. Now perhaps I will stop losing readers...you guys deserve content, and I am glad to once again give it to you. So if you have any Gallos or Ranaudos, hit me up, let's make a trade and then I will have more content to post about!
Posted by J. Meeks at 8:20 PM