Sorry, but this post has nothing to do with Batman. I'm sitting in a survey methods course talking about questionnaire design, and honestly, I'm bored. For some reason the title just popped into my head when I decided that I should write an update.

During the course of the past couple weeks, I've picked up a few cards from eBay. Let's take a look. 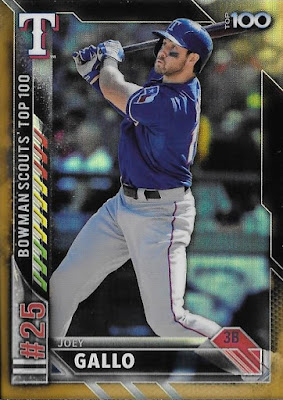 First up, I snagged this gold refractor parallel of the Joey Gallo Top 100 insert from 2016 Bowman. I dig these parallels, but I've always been a bit of a fan of chasing a cardboard rainbow. This is the only version of this card that I have. 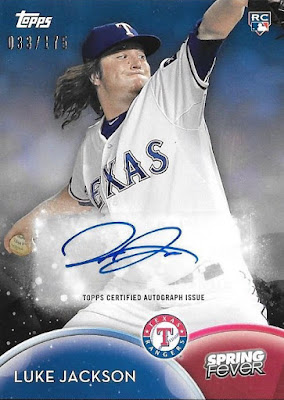 Every year in recent memory, Topps has put out the "Spring Fever" insert usually available only in shops as a "free" pack when you purchase a box of Series 1. Occasionally, a pack will have an auto. This card falls into that category, but someone other than me pulled it. It's a rookie auto of Luke Jackson, numbered 33 of 175.

I saved this card for last. I've been wanting it since I saw the sell sheet for 2016 Bowman. In the product, there is an insert set called "Turn Two." It features two key prospects form the organization, one on each side of the card (ironically, it doesn't necessarily feature middle infielders, which is what I think of when I think "turn two").

Some of these inserts feature autos of the two players featured. The Rangers have one of these cards, featuring last year's #4 overall draft pick, Dillon Tate and star prospect Lewis Brinson. I failed many times trying to get my hands on one, but finally succeeded last week: 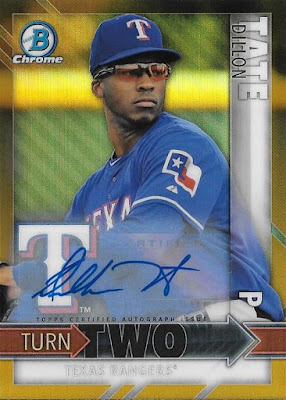 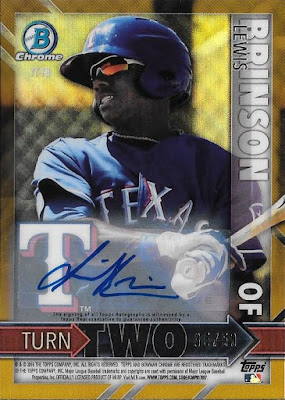 Strangely, I've only seen the gold parallel numbered to 50 and the superfractor. I haven't seen any autos on the base, green or orange refractors of this card, so I think the autos are only on the gold version. With this card, I've been able to snag at least one copy of each Ranger auto in the 2016 Bowman set.