I've got to get this out: I hate the Blue Jays. For numerous reasons. I cannot stand them. Their fans are pretty awful - I've already received a handful of hateful/threatening tweets since the game ended just a few minutes ago. Stay classy, you keyboard warriors of Toronto.

Okay, I feel slightly better, but not a lot.

On to something that will make me feel better. This year, my box opening has decreased dramatically. This is due to a combination of being on a tighter budget and the fact that Topps products are becoming more and more disappointing.

However, when I saw that Heritage Minor Leagues would have an on-card auto and a relic card in each box, I knew that I was in. The best part? A box only runs about $50. So I set aside some money to purchase two boxes, as I thought that would guarantee a full set. Spoiler alert: it didn't.

I bought my first two boxes at my LCS in Lubbock. My relics weren't bad - at least I've heard of these guys: 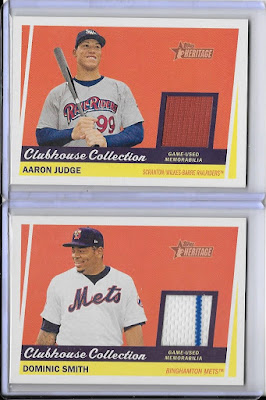 My autos? Well, they were a different story. I haven't heard of either of these guys: 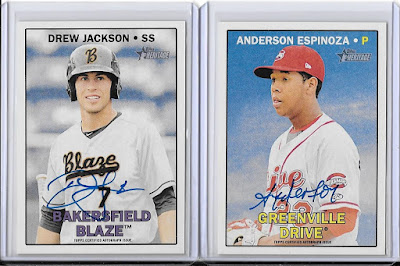 I also pulled a few of the blue-border parallels: 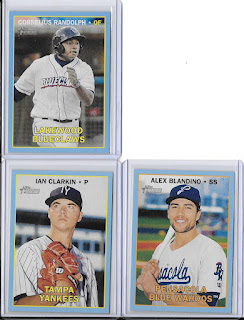 And I even snagged a peach-parallel (can we please call it something else???) numbered to 25: 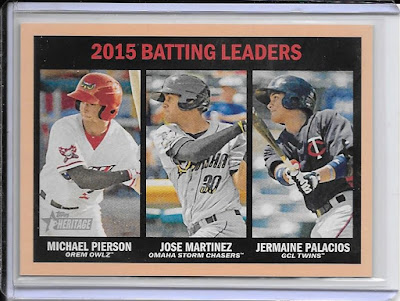 However, the "big hit" of my two boxes was this: 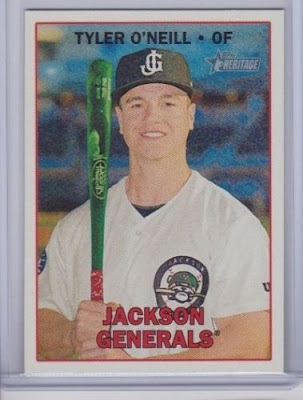 The Tyler O'Neill "green bat" variation (thanks to eBay for the photo - I'll explain momentarily). So far, only three of these types of variations have been found. It's cool to pull one.

A few days later, I was back in DFW and I decided to stop in and visit with Duane of Duane's Sports Cards. After the initial hand collation of my first two boxes, I had only about 66% of the set. So I decided to buy another couple boxes.

My relics were decent: 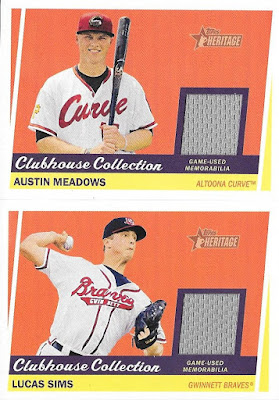 I've heard of these guys, too. How about the autos? 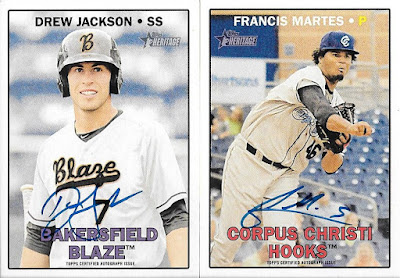 Wait - another Jackson auto??? Okay, that sucks. What about the blue-border parallels? 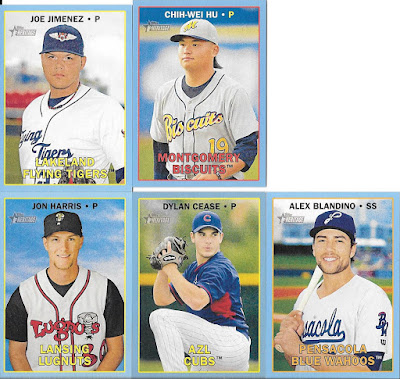 That Blandino looks familiar...oh yeah, I pulled the same card in my first round. I also pulled a peach parallel (still sounds stupid): 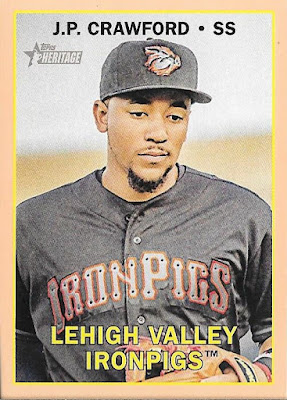 Hey, that isn't too bad.

And I also noticed that one box had two autos in it. You may have seen the tweet:

Sweet! One of the "SSP" no team name autos of Phil Bickford!!!! I didn't realize Bickford was traded to the Brewers earlier this year, but this is still a sweet card.

When I returned to Lubbock, I stopped by my LCS and dropped off the Bickford and O'Neill to be sent into PSA for slabbing and grading. I don't care so much about the grades (I expect both to be 9's), but I love seeing a Heritage card in a PSA slab. I guess it's an OCD thing.

I also collated my new boxes to finish off my set. But wouldn't you know, I am STILL a few cards short. Most annoyingly, I need card number 107. I shouldn't need ANY base cards after buying four boxes. Ridiculous. Beyond that, I need three short prints: card numbers 203, 206 and 212. If you have any of those, let's talk!

Lastly, each box comes with two cards that offer chances at winning a day to "make your pro debut." Each card has a code that is revealed by scratching the coating and entering the code on the website www.topps.com/promotions. The card looks like this: 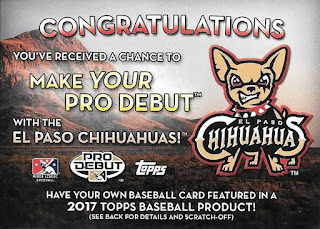 I had eight of these cards. I never win anything, so I threw the cards away. Then I decided, what the heck? I pulled the cards from the trash bin next to my desk and scratched them and began entering them one-by-one into the system. Loser after loser. On the sixth entry, though, I actually won! The system said I was a winner and then asked me to answer a few short questions about my love of baseball. Sweet!

So, what exactly did I win?

It appears as if I won either a hat or a pin! Cool deal! I seriously doubt that I will win the grand prize, so I will take whatever I do win and be extremely happy!

So, overall, I love the set. Heritage in all of its variations is one of my favorite product lines. However, this set is a major disappointment in its collation issues. I shouldn't have to buy four boxes to put a set together, and if I did buy four boxes, I should have the entire set! I was not so fortunate. Receiving the same autos and parallels was just a coincidence - or at least that's what I'm telling myself.