Something I Just Noticed

In all the excitement around my hot hand with 2017 Heritage, I missed something. I make no bones about my distaste for most things Topps - I'm no fan of the exclusive licensing with MLB because I think it makes Topps lazy. I've pointed out easily correctable problems in the past to support this. However, in my excitement, I gave Topps too much slack. I found something that makes no sense.

Below is the base card (a short print) of Aroldis Chapman: 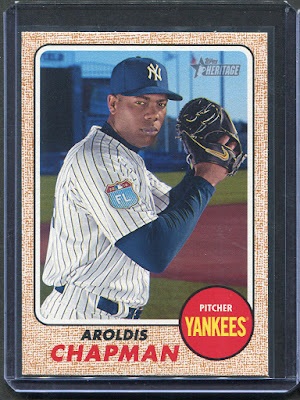 In the card, Chapman is featured in a Yankees uniform, very clearly from 2016. No problem there. But let's take a look at the Chapman Chrome card: 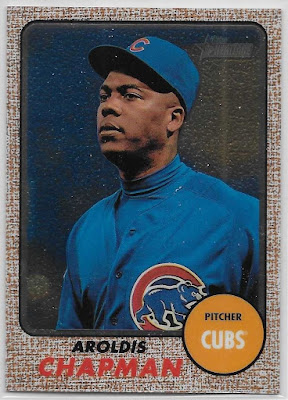 What? Why the heck is he in a Cubs uniform? I spent some time thinking and came to the conclusion that the Chrome cards most likely require more time to manufacture. This could have meant that the card design had to be submitted before Chapman re-signed with the Yanks (December 6th, if I'm not mistaken). That still seems like more than enough time to get him in the proper uniform, but I'm willing to give Topps the benefit of the doubt.

Until I saw this: 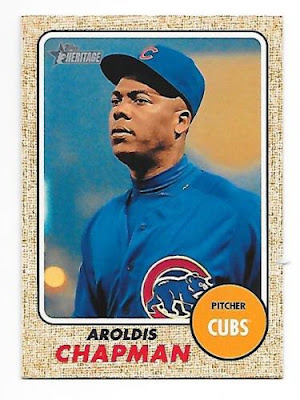 This is the mini parallel for Chapman, printing on normal stock, just smaller. Again, Chapman is sporting a Cubs uni, rather than the pinstripes of New York. So what in the actual hell gives?

My guess: Topps is trying to milk the Cubs' World Series championship for all it's worth. They want to feature him Cubbies blue to sell more cards. I mean, there is no other explanation, is there?

I guess my last question is this: why didn't Topps just feature him in a Cubs uniform on the base card also and wait until High Number came out to put him in pinstripes? That's their normal procedure, so what gives?
Posted by J. Meeks at 9:20 AM