In June, I noted that I had yet to add any of my Top 5 Most Wanted cards to my collection. Shortly thereafter, I added the Jon Daniels auto from the 2012 General Managers autograph subset.

Shortly thereafter, I added another card from the list in this 2013 Topps Heritage Matt Harrison mini.

A couple months passed. I swung a huge deal with an eBay seller and was so excited about the deal, I forgot to mention that the #1 card from the list was included.

Well, it's time to add another. This one...I was afraid I would never find this one. 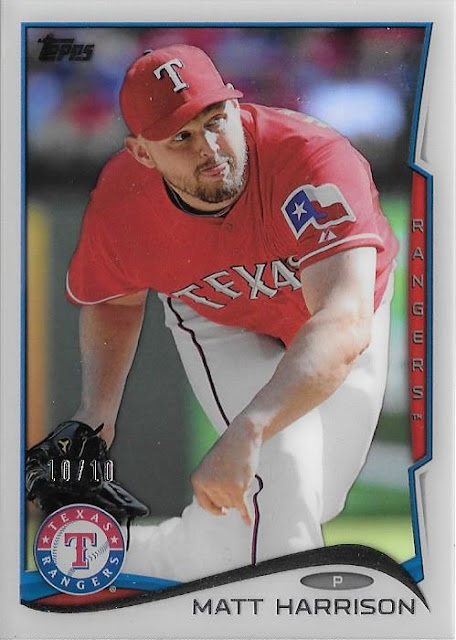 I've been watching for this card since well before it was put on the list. Never saw one. Was pretty sure I would never see one.

Until last week. It hit eBay at 99 cents, so I put in a max bid that I knew would cover it - when you think you will only have one chance at a card, you make sure you don't lose.

So, with about an hour to go, the auction was still at 99 cents. I got my hopes up that I would sneak this one out for cheap. Then reality kicked me in the shin and bidders started running it up, all the way past....$16. Still not a bad deal.

Sometimes, you just get really excited for a card. You know that no one else will probably give a damn, but that card means the word to you. For me, right now, this is that card.
Posted by J. Meeks at 11:43 PM