If you didn't notice (and believe me, I don't blame you if you didn't), I've been absent from the blogging world for about a week and a half. I decided to go home for a bit to recharge before summer classes begin and I hit the proverbial homestretch of my program (I am done with coursework in December, then I have only my dissertation standing between me and the title of "Doctor").

When I was home, I was able to catch one Ranger game with my best friend and my cousin (who's more like a brother). I sent out a tweet that night saying that that particular day may have been the best day of my collecting and fandom life. There was just something special about being there with those two guys.

Before the game, my best friend and I tried unsuccessfully to get autographs at the players' entrance to the stadium. Turns out, we were too late. We made our way over to the home plate entrance and were able to sneak into the stadium early with the season ticket holders. We immediately went to the Rangers' dugout to try and grab some autos, but were unsuccessful. However, I saw that no one was standing down the line towards the pitchers, so we moved down. When Rangers BP was over, the pitchers made their way to the dugout. Fortune favored us, and I was able to snag this:

Super stoked! I was able to get Darvish to sign for me before tonight's game! pic.twitter.com/dqy2AWuWIm
— My Cardboard Habit (@cardboardhabit) May 24, 2016


Yu Darvish! He only signed five autographs, and I was fortunate enough to get two of them (my friend was holding a bat for me, also). I was stoked!

I didn't do much else in terms of baseball or baseball cards while I was home. However, when I came home today, I had a couple packages waiting for me. First was a package from our good friend Rosenort of Condition Sensitive. Among others were these two cards: This is a beautiful purple framed Rougned Odor from 2016 Gypsy Queen. I'm fairly certain Rosenort pulled this when he busted his boxes of GQ, and I am thankful he thought of me! 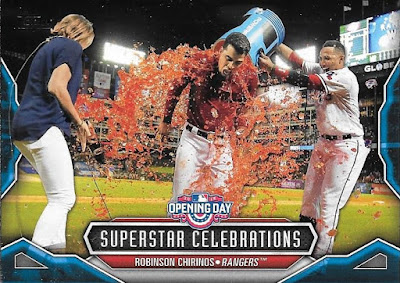 This is a Superstar Celebrations insert from 2016 Opening Day. I included this card because the woman on the left of the card is Emily Jones. She has been the "dugout" reporter for the Rangers for quite some time. More importantly, she is a Texas Tech alum and a really cool lady. You can't really tell in this card, but the players have almost made it a game to soak her in the Gatorade bath, along with the deserving player.

My second package was from eBay. 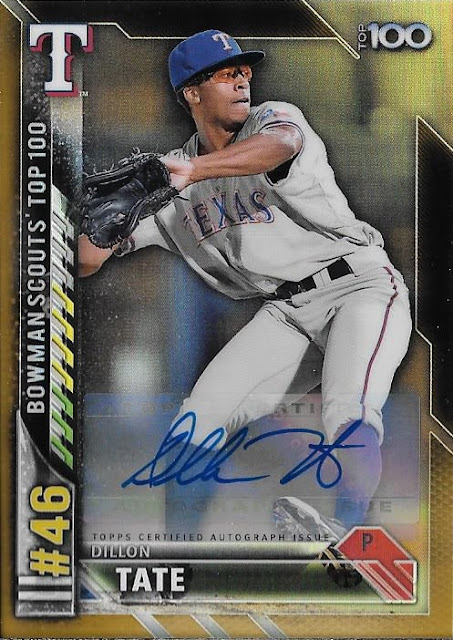 This is the Bowman Scout's Top 100 gold auto of Dillon Tate, numbered to 50. I don't think they made any other autos of this card (color or base) as I have yet to see them if they have. Either way, I'm glad to add this to the collection.

So there it is, I'm back. I hope everyone is well!