Holy Crap, It's Been A While!

June 29, 2015. That's the last time I had a new blog post. I was finishing up the class I taught for Summer I and trying to wrap up a very, very brief research project. Once all of that was finished, I returned home to spend some time with my dad.

But now I am back in Lubbock, briefly. I was awarded a fellowship and had to come back to fill out and sign the paperwork. So I decided to break the post-less streak and start sharing some cards that I've picked up recently.

My first post shares a single card, but it's one I recently found that I had no idea even existed: 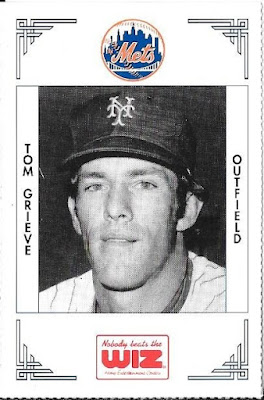 This is the card number 152 in the 1991 "Nobody Beats the Wiz" set. The cards are about three-quarters the size of a regular card and came in sheets, separated by tearing the perforations. 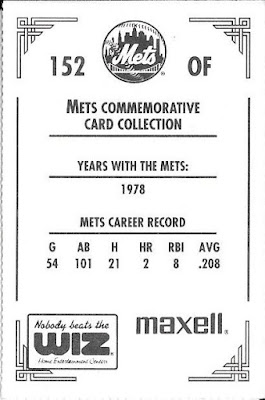 I'm clearly not from New York, but I have no idea what "The Wiz" is (other than some kind of entertainment store).

As for Grieve, this card kind of makes me sad. Grieve moved with the Senators to Arlington in 1972. He was traded to the Mets in 1978, but left after one year with the team. He returned to Texas in a front-office role, eventually becoming the GM. His most significant action in this role is signing Nolan Ryan.

After working in the front office, Grieve transitioned to the broadcast booth, where he still resides today. He was inducted into the Texas Rangers Hall of Fame a few years ago and is affectionately known as "Mr. Ranger."

If you feel like the name sounds familiar, but you can't really place way, maybe this will help. Tom is the father of former major-leaguer Ben Grieve.

So there it is, my first post in what seems like forever (almost a month!!!). There is more to come, so keep an eye open!
Posted by J. Meeks at 5:46 PM