My trip to my alma mater lasted longer than I expected. As such, I am extending the "show me your card room" contest for a few extra days!

I am accepting entries until noon (Central time) this Wednesday, August 24!!!

That's it! So incredibly simple!

I also have a few more pics to share...Some things I keep in my office. Let's take a look! 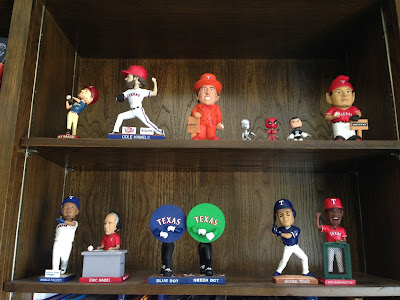 I keep a few bobbleheads on my bookshelf in my office. I'm working on acquiring more, though I don't know if I will ever be on Dan's level. 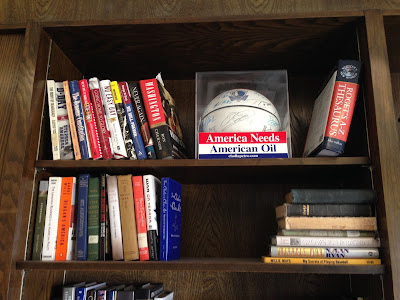 I also display my Dallas Mavericks team-signed ball from (I think) 2013. I can't remember when I got it. And yes, I think America needs American oil. hahahaha

Baseball cards are not the only things I try to collect. I also love music. Here are a few concert posters that I have: 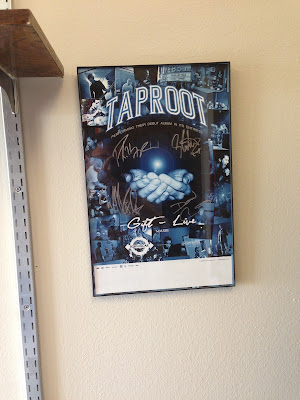 This is a signed gig poster from the rock band Taproot. Taproot has been one of my favorite bands since I was in high school. I finally got to see them around Thanksgiving in 2013. While performing one of my favorite songs ("Mine"), lead singer Stephen Richards took my phone and recorded while he was singing (around the 2:20 mark in the video below). I know some people frown upon recording songs at shows, but when the band and their music has been a serious part of your life, I think it's perfectly fine.


I have a couple more concert posters in my office: 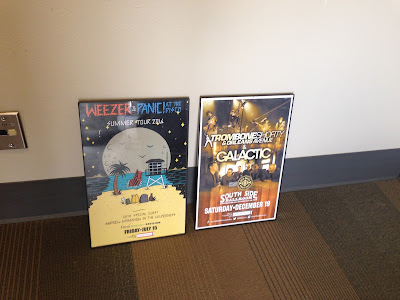 I haven't had an opportunity hang these yet. One is from the Weezer/Panic tour earlier this year. The other is from a Trombone Shorty show that was in Fort Worth last Christmas.

So there it is, go forth and conquer.

MASSIVE EDIT ALERT - I originally posted this right after a 17-hour drive and I was falling asleep while working on it. There were A TON of issues with this post, but I think I have corrected them. Thanks for not making me feel like a moron for the incoherent gibberish that was in this post!
Posted by J. Meeks at 6:19 PM