A TTM That Literally Moved Me To Tears (Or, The One Post I Hope You Read)

It's 1:45 in the morning and I just walked into my apartment. The past week and a half has been incredibly tough. Beyond some personal issues, I've been preparing for a research conference in Minneapolis that begins Thursday. I'll be presenting one of my papers, and it's been a bit stressful.

Supposedly, it's good for my career to present at these. I'm not so certain it isn't terrible for my health. But it is what it is.

Anyway, the stress has really been killing me, not just physically, but emotionally as well. I know you don't want to hear a sob story, so I will spare you. As I said, I just walked in the door. But first, I had to stop and check my mail because I knew that a card I ordered arrived earlier. However, when I checked my mailbox, I had something else waiting for me, something that made me instantly start crying... 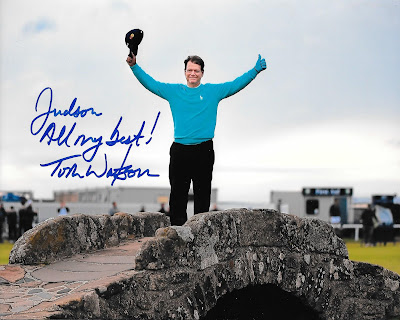 This is an 8x10 photo of Tom Watson as he crosses Swilcan Bridge at St. Andrews a final time. The image was taken in July of 2015. I remember watching it on television and breaking down into tears.

I don't look at athletes as heroes or even role models, for that matter. They're people, just like me...they just happen to be really good at a sport. That's awesome, but not enough to call someone a hero. Don't get me wrong - I still get excited when I'm in the presence of an elite athlete - but I'm not going to encourage my (imaginary) son to try to model his life after him.

However, as with almost everything, there is an exception. Tom Watson is my exception. You see, ever since I can remember, I have watched golf with my grandfather. My father-figure throughout my life, Pap (as I call him) has been instrumental in teaching everything from riding a bike to what it means to be a man, and everything in between. I've been by his side, playing and watching golf since I was three years old.

Tom Watson is my grandfather's favorite golfer. He has been for as long as I can remember. When we would watch, my grandfather would instruct me to pay attention - "Do see how he addresses the ball? You've got to step up like you've got a pair, like Watson does." "Did you see how he kept his head down all the way through the follow through? You gotta keep yours down, too." I learned how to play watching Watson and my grandfather.

My grandfather isn't in the greatest health. About four years ago, he had a debilitating stroke and hasn't been able to play since. I still take him out when I'm home - I tell him I need help with my swing, and sometimes I intentionally screw up just so I can get the "old" Pap to come out - and my cousin makes an effort to bring him to our country club's Thursday-night scrambles so he can ride and chat with his old friends. But it isn't the same when he isn't on the course.

We still have Tom Watson, though. We watch (mostly Senior PGA events these days, at least when we're watching Tom) and he still coaches. It reminds me of all those years spent in the summer, all the 6:30 a.m. tee times (to beat the heat). It reminds me of the times I've wanted to throw my 5 iron in the lake, and the times I've seen my grandfather wrap a putter around a tree (no joke - I've seen it at least five times). It reminds me of the times when I would watch my grandfather, idolizing him and wishing...hoping...that I could be half the golfer - and the man - that he is.

For this, Tom Watson is my hero. Not because of anything he has done on the course - which he has done a lot - but because in him, I see my grandfather. These are tears of joy, and I am forever grateful for Mr. Watson for sending them to me.
Posted by J. Meeks at 12:06 AM