As I said yesterday, this week is extremely busy.  I feel like I've been running around in circles and I haven't had a lot of time to breathe.  Well, now is my time to do it, however brief it may be.

I received some awesome trade packages yesterday.  I want to share a few cards from each one, so here they are! 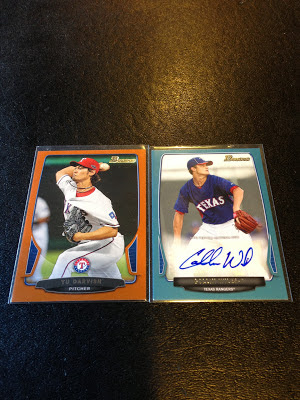 First, we have these two beauties (sent along with a few more) from Ryan at "O" No!!! Another Orioles Blog.  He had one of the Collin Wiles auto parallels I needed and this Darvish orange parallel that I wanted and I had a few cards from various sets that he needed, so we were able to work something out.  I'm truly excited about adding the Wiles to my PC (I'm getting closer to having the entire rainbow), and I think that I have a new Darvish PC in the making.  I didn't realize how actively I am working to gather his cards, so I guess I will put together a PC page for him soon.  Thanks Ryan! 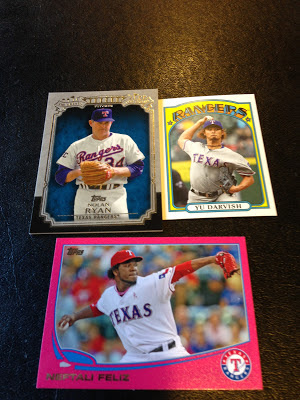 The next package I opened was from William at foul bunt.  William and I have traded a few times now, and he always sends me great stuff.  The Ryan card is sweet and has a high-class feel to it.  Again, another Darvish made its way to me, and I can't complain (especially with the '72 theme going).  The Pink Feliz was the primary card in the trade.  It's my first pink parallel of any sort, and I'm glad to have it.  Thanks William! 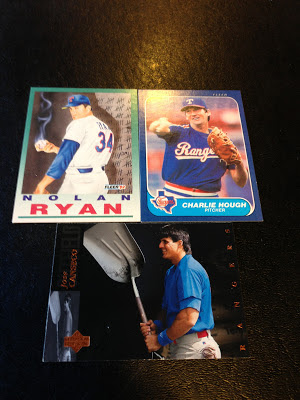 The third package I received was from Marcus over at All the Way to the Backstop.  Marcus is a Padres fan who is currently living/working in Texas.  I had a ton of Heritage Padres and a few randoms that he needed for a set, so we worked out a deal that sent these beauties my way.  I have a lot of Nolan cards, but I don't have this one.  I love it!  Charlie Hough was one of my all-time favorite Ranger pitchers, so I was happy to see this one.  And lastly, I think we all agree that Jose Canseco should be using that shovel to dig ditches.  That would be a better job for him.  The card, therefore, is perfect. 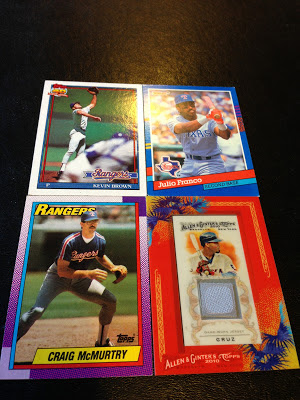 Last (but certainly not least, I have the package I received from Chris over at the Nachos Grande blog.  Again, I had some cards that he was looking for and he happened to have some of the Gypsy Queen set that I am working on (I'm eight cards away from finishing, by the way, so if you have anything I need, please help me out!).  Chris sent me some awesome cards...it was difficult to choose which ones I wanted to showcase. I love this Kevin Brown card.  It looks like he is trying to rob a home run...from the pitcher's mound.  Julio Franco...need I say more???  Craig McMurtry...who is this guy?  I consider myself to have near-almanac knowledge of the Texas Rangers, and I have never heard of McMurtry.  Now I know.  And lasy, I appreciate the very "loud" Nelson Cruz relic from the 2010 A&G set.

Thanks again, everyone, for the cards.  I appreciate them all, and I'm truly sorry that I don't have more time to expand on these trades! (I started this post at 9:15 this morning and I am just now finishing)
Posted by J. Meeks at 11:09 AM