Heartbreak at the LCS

I've been on the fence since I heard this story yesterday when it comes to sharing it. It's a heartbreaking story that doesn't have a true happy ending, and if I'm going to be completely honest, it made me shed a tear. But ultimately, I think the story, though tragic, shows the power the hobby has in our personal lives.

There are only two shops that I consider to be my "local" card shops. One is in North Richland Hills, about an hour and fifteen minutes from my home. The other is Duane's Sports Cards, located in Grand Prairie, about an hour and a half from my house. I like both of them, but I go to Duane's when I'm looking for specific cards.

Duane's Sports cards is jointly operated by four men, all of whom have retired from their careers. The card shop is more or less a place for them to gather, tell stories, rip packs and trade cards. When they say they aren't in it for the money, they genuinely mean it. 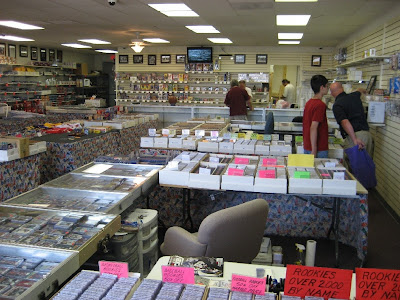 The shop is divided into four sections - one for each of the owners. I especially like "Bob," he's always been extremely nice to me and gives me a great deal every time I come in to buy some singles from him. I go out of my way to buy some cards from him, even if I don't really need anything, just because he's one of the nicest people I ever met.


Yesterday morning, I had a meeting in Addison (north Dallas). After the meeting was over, my boss called to tell me he had some Ranger tickets for the 1 p.m. game. Having a bit of time to waste, I went to Duane's to see if I could find anything I needed or wanted. Bob was the only person working, so we chatted as I searched through some of his .25 cent boxes.

The conversation eventually led to our collections. He asked me how I got into card collecting. I explained my background and that I got out in the early 90's but had picked it up last year. He then told me his story - he started collecting in the 1940's ("mostly just tobacco cards back then," he stressed). He was an aerospace engineer and had money to spend, so buying cards was never a problem for him. When he had a son, he started working to put sets together with the intention of passing them down to him.

This is where my heart began to ache for him. He told me that he and his son collected together for fifty years. His son, an independent insurance agent, planned to retire at 65 and then open his own baseball card shop. Bob had decided to join him in that venture. However, while on a cruise, his son began to feel ill, ending up in the medical ward on the ship. The doctor ran some tests and told him to see his doctor as soon as possible.

Bob's son was diagnosed with leukemia that week. He was given three months to live, but managed to fight off the disease for five years before tragically passing, never having the opportunity to fulfill his dream of having a card shop with his father.

It was at this point in the story I noticed Bob crying, which brought me to tears. It's a travesty for any parent to have to watch a child die. I simply cannot fathom the pain that brings.

Bob's entire collection was built with the intent of sharing it with his son. That dream was taken from him. You can tell that it nearly killed Bob when his son passed.

Now, every card I buy from Bob - especially the vintage cards from his own collection - will carry much, much more meaning for me. It's not just a piece of cardboard with a picture on it. It's a memory of a family. It's a father and son opening packs together. It's love - true, undying love - in its very essence.
Posted by J. Meeks at 12:03 PM