I received my first cards of 2016 in the mail yesterday. It was a good day.

First up, I added to my 2010 Topps T206 American Caramel Framed Mini Auto project. I've been after this card since I began the project, but it always seemed to be priced in the $30-$40 range, far more than I was willing to pay. However, a couple days after Christmas, I saw it listed at .99 cents to begin the auction. A few days later and after a winning bid of $4.01, I became the proud owner of this guy: 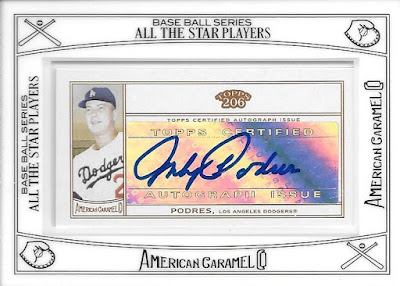 Dodger legend Johnny Podres. His list of accomplishments includes many things, but perhaps the most impressive is his 2-0 shutout of the Yankees in the 1955 World Series, bringing Brooklyn their first (and only) World Series title. In the process, Podres became the first World Series Most Valuable Player.

If my mail day only had that card, it would be a good day. However, I also received a package from Topps, as one of my two remaining redemptions was fulfilled. You know I was excited for the Podres card, so imagine how I felt when I opened this guy up: 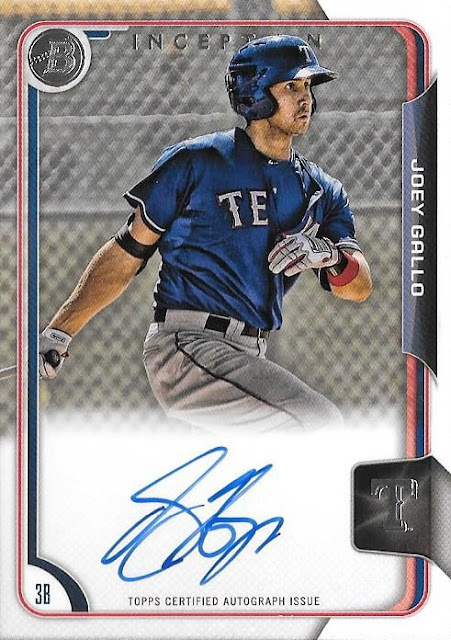 A 2015 Bowman Inception "Inception" auto of Joey Gallo!!!! These bad boys come one per case. When the product released in 2015, I bought a box at Duane's Sports Cards in Arlington (I was back home, staying with my dad in the hospital; I visited Duane's one day while my dad was undergoing surgery). While I didn't pull this card, I did pull a Luis Severino version:

I loved it. I watched eBay for months, waiting for a Gallo to be listed. After many failed attempts, I just happened to see a seller list the card for $8.99. I pounced! A large part of me was afraid that I was going to get an email from the seller saying that he had made a mistake in the listing process and refuse to send me the card, but those fears turned out to be unfounded. I received the redemption and entered it quickly, and then waited. And Waited. And waited. But it's here now, and I couldn't be happier!