I've been back in the card-collecting world now for almost four years. I've learned a lot of things, but the one thing I learned that I hold to be true is that this is a crazy hobby and you never know what you will find.

Since I began my Matt Harrison player collection, I've been trying to find his 2003 Bowman cards. These were some of his first, and with the gold refractor having only 50 copies, I assumed my chances of finding one were about the same as a snowball's chance in hell.

Fast forward to a couple weeks ago. I check my eBay searches and see that one has popped up for an opening bid of $10. That's a bit more than I want to pay, but I know that this is the first time I have seen the card in the near-four years I've been back. So I watch the card with the intention of bidding in the last minute.

A week later, I remember the card and look in eBay, only to see that I missed the card...

However, later that day, I get a message from my local LCS owner. The subject? "Hey, you need this?" The photo accompanying it was none other than a gold refractor from 2003 Bowman Draft gold refractor. 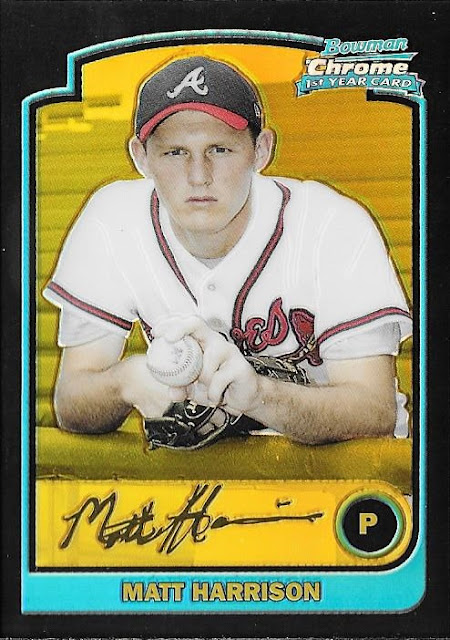 He just happened to find the card while remodeling his shop. How freaking lucky am I? What makes it even better is the price I paid - much more in line with what I was wanting to pay.

So there it is - karma is kind to me.

And this card is an absolute beauty, if I do say so myself.
Posted by J. Meeks at 8:22 PM