Time To Give Topps Some Praise

Back in 2014, I purchased a redemption for a 2013 Tier One Matt Harrison auto copper rose parallel numbered to 25. I assumed that since version 1 of the card was already live, I wouldn't be waiting very long before I received it.

Fast forward to a few months ago. I was reading my blogroll and saw a post from someone (I'm sorry, I can't remember whose post it was and therefore can't give proper credit!) talking about an email they received from Topps discussing the changes coming to the Topps redemption program. Long story short - the company was abandoning the old site in favor of a new integrated system with their current www.topps.com website.

I never received the email, but decided to check out the new site. A few minutes and questions later, I was looking at my "Outstanding Redemptions" page, with only one redemption staring back at me: the 2013 Tier One Matt Harrison.

One f the perks of the new site, at least according to the company, is a smoother process for requesting redemption replacements. I decided to try my luck and requested a replacement. For the record, it is WAY easier to do this now.

As soon as I made the request, I began to worry. I made a similar request in 2014 for the same card for Nelson Cruz. The card I received was a base auto of a no-name prospect from 2011 Bowman Chrome and I had to fight to get Topps to send me a equal replacement, which turned out to be a 2012 Bowman Draft Chrome Joey Gallo auto. EDIT: I just went back to look at the card, and I hate myself. More on this at the end.

Anyway, I waited a couple months. A couple weeks ago, I noticed that the card shipped and saw what the replacement was. I was pretty excited about it. I received the package today. Inside, I found this letter: 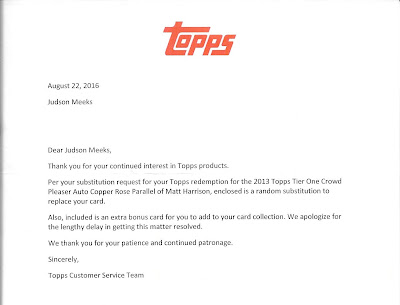 Nice, a bonus card as a gift for the lengthy delay! 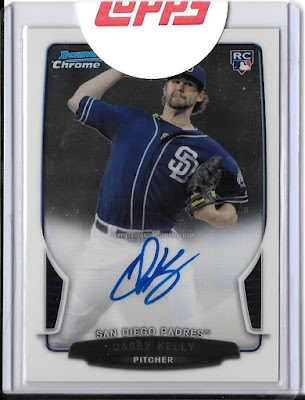 Okay, so I'm not exactly breaking the bank with this one. But it's the thought that counts, and I appreciate the gesture from Topps. Doesn't hurt that it's from my favorite set since I got back into collecting.

But here is the replacement card, and I am fairly certain it's "equal" to a Matt Harrison auto numbered to 25. Okay, maybe not. You be the judge. 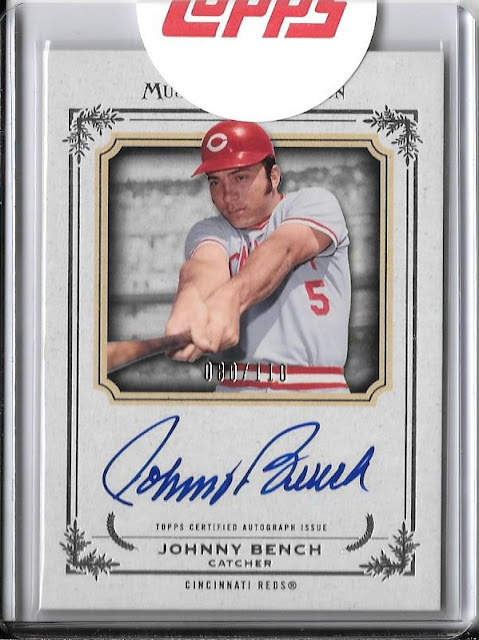 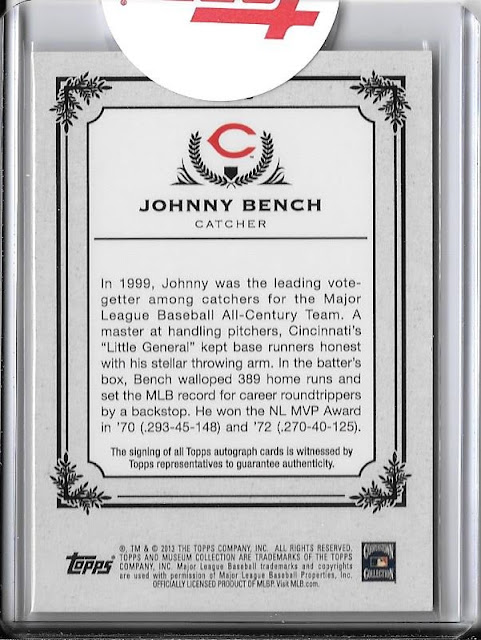 Yeah, this is definitely equal! This card is a beauty! I'm not going to remove it from the top loader. Rather, I'm going to send it to Beckett as is and have them slab it. I'm pretty excited to add this to my collection!!!! Thank you Topps!

And now, more to the story: As I mentioned, Topps sent me a card that I didn't feel was an equal replacement. At the time, I was correct. However, I now wish that I would have kept the damn card: 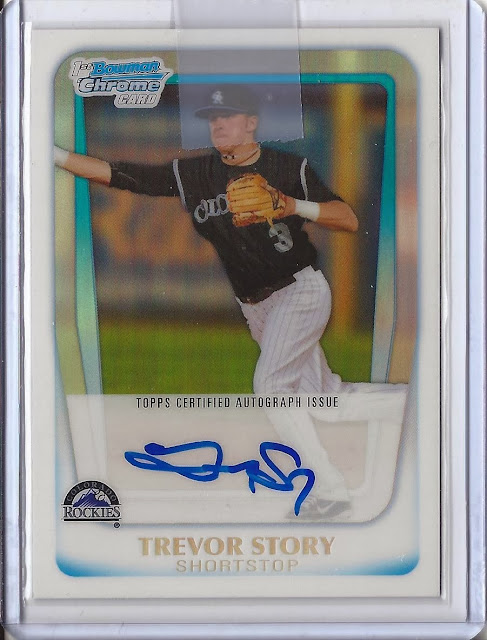