So, I have decided to stop waiting until a product has been pout for some time to ponder doing a box break and I'm going to go ahead and schedule one.  Therefore, consider this my official announcement for my first 2013 Allen & Ginter Box Break!!! 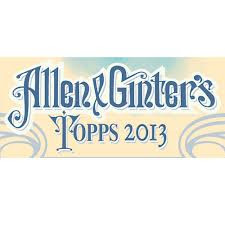 Each team will cost $15 (this includes shipping).  But wait - there's more!!!  I will be accepting specific team requests for the first 15 spots.  The remaining 15 teams will be randomly assigned to a participant.  So, if you buy two specific teams, you will receive cards for those two teams and two randomly assigned teams - four teams total!!!

Since Allen & Ginter includes base cards inserts that do no feature players, they are up for grabs, too!  One slot for non-athletes is included and does not include a free pairing.  It can be had for $10.  Each insert can be purchased for $1 - that's right, just a buck!!!

I hope to hear from you soon!  This is going to be a lot of fun and a good jump on building this set!!!

Here are the teams: