Quick Interview With A Super Bowl Champ And Pro Bowler

I'm a pretty lucky guy. My family is pretty well-known in this small part of the world. My grandfather probably knows everyone who has lived int he surrounding counties over the last 70+ years. This has afforded me the opportunity to meet some former football players on the golf course.

The first former player I got to play golf with was Jerry Logan, or, as my grandfather knows him by, "Jerry Don." 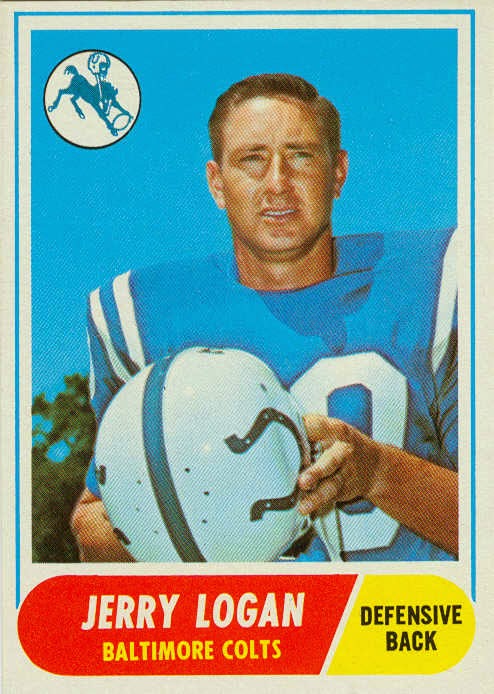 Logan was a defensive back on some of the best teams in NFL history, the Baltimore Colts of the 1960s. He was on the Colts team that lost to Joe Namath in the 1969 Super Bowl (III), but he was also on the Colts team that beat the beloved Cowboys in Super Bowl V two years later. He played in three Pro Bowls (1965, 1970, 1971) and, as a career highlight, intercepted Namath three times in the same game during the 1970 season.

I was a kid when I first met Jerry, maybe 7 or 8 years old. He signed my scorecard for me, but I didn't realize who he really was back then. recently, he had been by to visit my grandfather, who suggested I send him a note (and a football to sign). I did, and here is the responses to the questions I asked.

You were drafted by the Colts and the Raiders. Was there any debate about which team and league you were going to join? I always wanted to go to the Colts. They were the best team in the best league at the time.

What was it like arriving at an NFL camp for the first time? Very exciting...and very frightening at the same time.

How did it feel intercepting Joe Namath three time in that 1970 game? Very rewarding since I missed one in Super Bowl III.

What was it like playing the Super Bowl against a team that - I'm assuming - many of your friends back home in Texas were a fan of? I had a lot of support from home for me, but a lot of them wanted the Cowboys to win!

I'm sorry to ask the question I'm sure you've heard a million times - what's it  like winning a Super Bowl? After losing Super Bowl III, it was just a feeling of relief that we had finally won one.

Do you still wear your ring? Occasionally, for special events.

What was it like to get your first football card? Surprised.

I read that you still have some memorabilia from your playing days. What's your favorite piece(s) and why? 5 footballs for player of the game.

Any advice for autograph and memorabilia collectors who request autographs through the mail like this? Send a post-addressed envelope or package and I will sign and return!

So there you go! A few quick questions for a Super Bowl champ and Pro Bowler! If you are interested in sending Jerry something, let me know and I will get you his address (if you can't find it online). If you do send him a note, I look forward to seeing his responses to you!
Posted by J. Meeks at 11:11 AM