If you remember, I've had pretty decent luck with retail packs from Walmart. Hanger boxes yielded me some pretty nice hits.

I decided to try my luck again. Yesterday was my birthday. I was feeling pretty bummed  because my great grandmother passed away Sunday night. (She was 101 and lived a wonderfully full life - but a family member's passing is always tough). I decided to buy some cardboard from Wally World in hopes of something to cheer me up.

My Walmart hasn't put out any new cards since 2014 S2 came out, so I bought two hanger packs. In the first one was this: 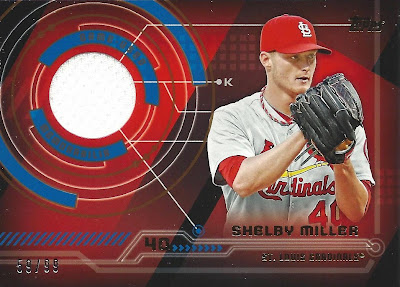 A Trajectory relic numbered to 99! I already pulled the base version of this card, so it was nice to get the numbered version.

But that isn't my best pull ever.

Pulling that card convinced me to go back and grab a couple more hanger packs. So affter lunch, I did just that. I walked out of Walmart with four of these packs (a couple couples).

In the third pack was this monster: 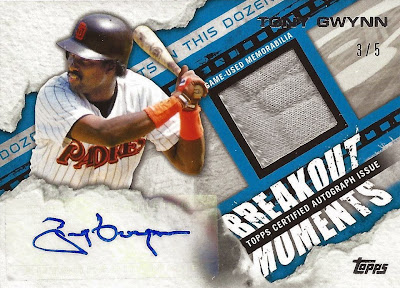 I think that the cardboard gods favor me with retail since the closest LCS is almost two hours away. I really have no other explanation of my luck there. But this is by far and away my best pull EVER.

My first thought was Marcus of all the way to the backstop and Gavin over at Baseball Card Breakdown. I know those guys are bug Gwynn fans. And honestly, a card like this deserves to be in their hands. Unfortunately, my seemingly neverending quest to complete my Luke Jackson Rainbow requires some substantial cash for the remaining cards, cash I would never have in my pocket. So this card is hopefully going to help with that.

I pulled this card more than three hours ago and I'm still shaking. I can't believe I'm this damn lucky with retail.
Posted by J. Meeks at 1:36 PM