Rest In Peace, My Friend

This is going to be the hardest blog post I've ever had to write.

Yesterday, while returning from meetings in Dallas and Southlake, I stopped by my local card shop Hometown Sports in North Richland Hills, to pick up some supplies. When I got there, the shop was closed and there were flowers on the door. Immediately, I began to fear the worst.

I sent a text to Jimmy, the shop owner, before leaving just to say that I hoped everything was okay.

Sadly, I received a call from his wife this morning. Jimmy had passed earlier in the week.

I sat in my truck and cried for 20 minutes. I'm not ashamed to admit that.

I've always considered Jimmy a good friend, but I don't think I completely understood how good of a friend he was.

Our friendship started in 2012 when I visited his shop for the first time. I had decided that I wanted to get back into card collecting, but I wanted more than what the shelves at Walmart had to offer. So I hit up the Topps Store Locator and saw that Jimmy's shop was closest to me.

I made the hour and a half trek and walked in, immediately greeted with a "How's it going?" He asked what I was looking for, to which I replied that I had no clue. I explained to him that I was just getting back into collecting after 20 years of being away. About that time, the other gentleman in the store pulled an autographed card out of a pack of football cards and started shouting with excitement. I mentioned that I had never pulled an autograph, so I was envious.

Jimmy heard this and grabbed an unopened box of 2012 Bowman Draft Picks and Prospects. He explained what the product was and then told me to start opening. Without asking questions, I started ripping. When I got to the 14th pack, I pulled a blue refractor autograph and started grinning from ear to ear. Jimmy charged me $4 for the pack that had the auto. Then, with the humor he always had, Jimmy said, "Now you've pulled an auto. Stop complaining about it!"

I would pull many more autos in that shop in the two years since first visiting. Jimmy would become more than my LCS owner; he was my friend. When he became interested in selling some minerals he inherited, I stepped into help him sell them. I expected nothing for doing so, but Jimmy insisted that I accept a game-used and autographed Nelson Cruz bat as a token of his appreciation. He would always let me know if the box he had opened behind the counter still had the auto in it. If it didn't, he would open a new box just for me, every time, without fail. He always wanted me to have the best experience I could have while visiting his shop. And I always did.

Our friendship grew to the point to where I would make the trek to his shop just to chat. Like me, he was beyond upset that the Rangers hadn't re-signed Cruz. He was no fan of CJ Wilson, and had no problem telling anyone that would listen. He was an avid collector of Roger Maris, but was more interested in finding cards for other people's collections than he was of finding cards for his own. I can say this without hesitation or doubt - Jimmy was the reason that I renewed my love of cardboard. 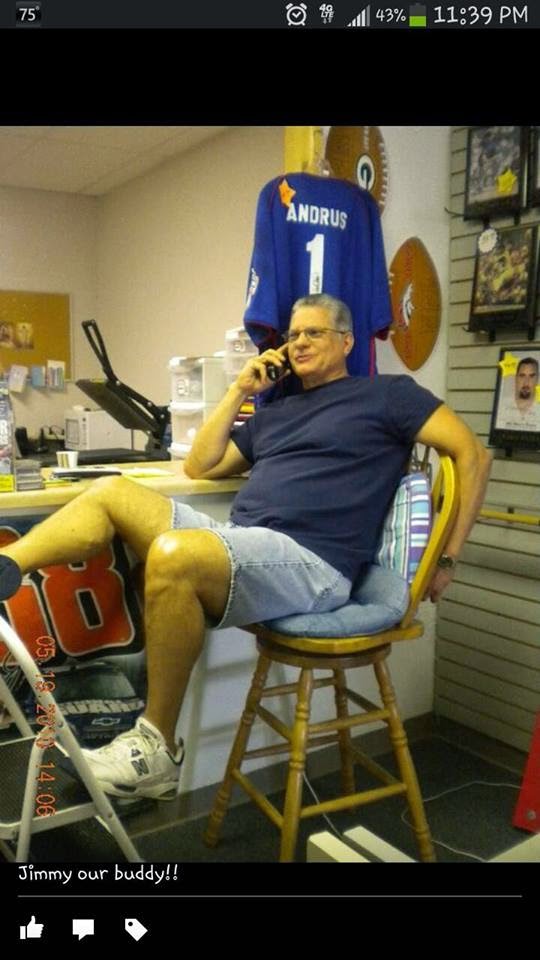 Rest in peace, my friend. I can't wait to trade cards with you in Heaven.