FINALLY Getting A Card Off The 'Most Wanted" List

Today is June 6, 2015. The year is almost half-way over. My collecting habits have slowed this year due to a restricted budget and some family concerns. Speaking of which, I apologize if I came across as whining in my last post - I certainly didn't intend to. I just needed to vent.

But enough with that. The year is almost half gone, and I have yet to acquire a single card from my Most Wanted list.

Until now, that is.

Feast your eyes on this!!! 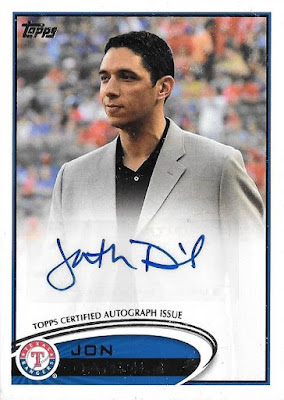 This is the GM auto of Rangers GM Jon Daniels. This card was featured in the 2012 Topps flagship set. This set holds a special place in my heart, as it was the first set I worked on when I was getting back into collecting that year. I bought a box and I pulled a GM auto, but it was from the San Diego GM (Byrnes, wasn't it?).

I've been trying to grab this card for a while, but every time I found it, it sold for more than I was willing to pay. This time, however, I was able to grab it for under $7.

Funny story - I began collecting after Series 2 dropped in 2012. I've always assumed that I had the entire set that year (S1, S2 US). Last week, I realized that I do not have the Series 1 portion of the set. So, if you have any of those......let me know.

Anyway, thanks again for reading, and thanks for letting me vent a few days ago.
Posted by J. Meeks at 8:32 PM