Well, I Bought Something New...

I've been a poor college student again for about six months now. Not a fan. it sucks.

But something amazing happened: my funding got a boost for the summer class I am teaching.

Naturally, I had to celebrate. And how better to do that than to buy cardboard, right? So I went browsing. And though I got a bit more money, I vowed not to spend more than $50.

Originally, the plan was to buy a Trout rookie from 2011 Update. That didn't happen; they are all above my $50 spending limit. However, i did find another auction that wasn't receiving a ton of attention. I waited until the final moments, but in my max bid, and snagged this for $45: 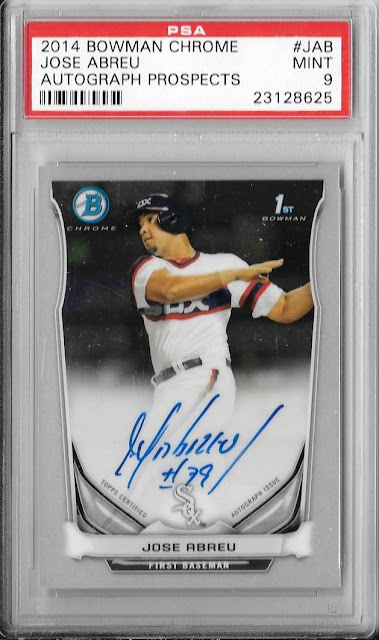 Jose Abreau's 2014 Bowman Prospect 1st Bowman auto. I wasn't paying attention and almost picked up his rookie auto from Bowman Chrome (this is from the first 2014 Bowman iteration). That would have sucked. But I caught myself and was able to get this one.

I've been on a slab kick here lately. So easy to organize. I got a couple back earlier this week that I submitted through my new LCS, but I'l show those later. Anyway, this one is only a PSA 9...I really wish they would do the half-point system that Beckett uses, but such is life.

So there it is, my newest purchase. I'm still not really sure how I feel about it, but that's pretty normal for me after I buy something.
Posted by J. Meeks at 9:31 PM