Have you ever been listening to the radio when an announcer comes on and offers a prize to caller 10? You pick up the phone, dial, only to get a busy signal. That was the story of my life.

Wednesday, I was listening to 103.3 ESPN Radio while sitting in my truck, waiting for a meeting. I heard the commercial, dialed, and BOOM - I won the contest! (The guy onn the other end started laughing pretty hard when he told me I was caller 10 and I replied with a "Holy Sh*t!!!") 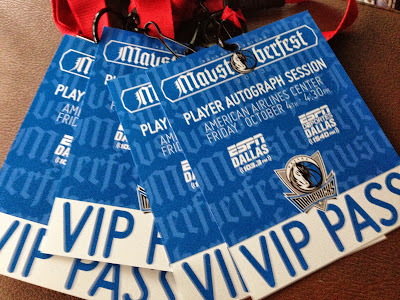 I took my cousin and a good friend from high school. I ended up giving the fourth pass away at the event. So, we got there, waited outside in the heat for an hour and a half, then finally were allowed in. At the direction of the guy from ESPN, we went strait to Dirk's table and the line was ridiculous. Fortunately, we were close to the front.

After grabbing Dirk's autograph as well as the other four guys at the table with him, we proceeded on to two other tables before the event was ended. We missed out on one table of five players. Here is the ball: 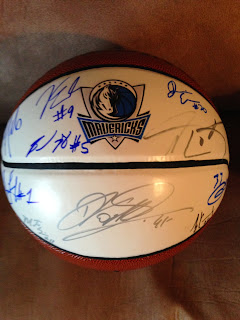 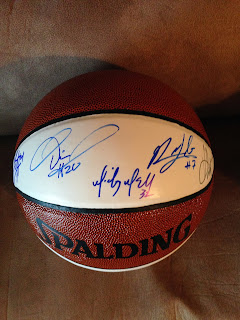 Let's highlight a few signatures, shall we?

I'm pretty excited to have had this opportunity. However, I'm not that big of a basketball fan, and the thought of selling this thing has crossed my mind. I wouldn't begin to know how much to sell it for, however, and I don't know if anyone would be interested in buying it with out CoA on the signatures. Regardless, I think I am content with this on my shelf at home.
Posted by J. Meeks at 1:35 PM