First, Chris of Nachos Grande fame has a new contest up. It relies on you and your blog. Check it out and sign up!

I recently decided to start a new player collection. I found myself acquiring more cards of Nelson Cruz than I had realized. I know, he used PED's. I forgive him. He's done a lot for the organization, and if he had better range in right field, we would have won the 2011 World Series. But it is what it is.

Let me share with you a few of the cards that I have recently added. 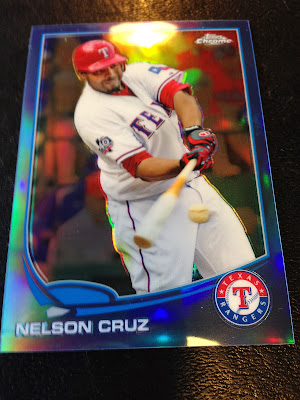 Holy blur, Batman! These refractors always seem to come out blurry when I take the picture with my iPhone. But here's the sapphire blue parallel from 2013 Chrome, numbered 128 of 199. 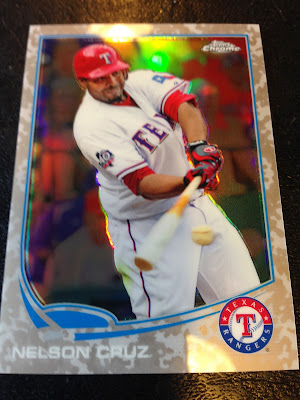 Staying on the Chrome side of things, here's the camo parallel (again, blurry) numbered 13 of 15.

I also got my first Museum Collection card, a Cruz quad relic (one thre-color jersey and three bat pieces). It's pretty. 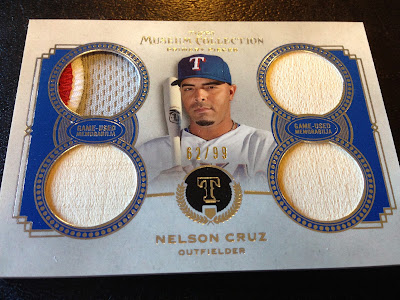 There are more cards to come, I just don't have picture of them yet. So, if you have some Cruz cards you don't want, send them my way!!
Posted by J. Meeks at 8:00 AM