I'm Angry (And You Should Sign Up For My Break)

First, I'm hosting a two- or three-box-break of 2013 Bowman Chome. Why two or three? Well, read my break announcement here to find out AND to sign up. Still TEN spots open! 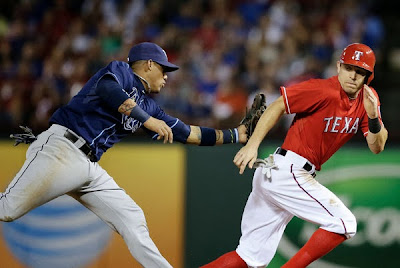 Now that that's out of the way, let me tell you why I'm angry. I'm angry that the Rangers played this poorly this year. Sure, April was hot and July was nice, but every other month seemed to be terrible for the Rangers, with the month of September being absolutely horrendous. I cannot honestly remember another month that looked so bad - and that is really saying something.

Hitting was nonexistent. A major-league outfield should have at least two legitimate power hitters. Nelson Cruz was one, until he was suspended. Leonys Martin and Craig Gentry definitely do not fit that definition. Alex Rios was a nice addition, but his numbers didn't really come along until the last two weeks of the season. Our first baseman, Mitch Moreland (who I love, by the way), hit .230 this year. .230!!!!! I really like AJ Pierzynski - I feel that he brought the leadership lost when Michael Young was traded - but he and Geovany Soto definitely didn't do as well as they could have.

How about the pitching? Well, Yu Davish was amazing for a while, then looked like a third starter for a while, then looked good for a while. The ace of a staff has to be an ace every time out. Darvish didn't have that level of consistency needed in an ace. Dutch looked good in the later half of the season, but he is still prone to getting beat up and going off the rails. Martin Perez looked like he has potential to be a legitimate number 2 starter in the near future, but he needs to mature mentally (i.e. stop letting little things get to him) before he reaches that next level. Matt Garza...I don't even know what to say about you really. I guess "adios" would probably be appropriate, because I don't think there is any way that the front office will give you the kind of money some other team is going to throw at you. Matt Harrison will hopefully be 100% and ready to go next year. Colby Lewis will probably get a veteran's minimum contract to come back, and my guess is that he will be in the bullpen.

The only consistently good aspect of this team this year was the bullpen. Scheppers took a huge step forward in his development, and even though he stumbled briefly, he looks to have the stuff to be a legitimate closer one day. Speaking of which, Joe Nathan was just about as consistent as they come. The team holds an option on him for next season, but language in his contract allows him to void that option. Neal Cotts was a pleasant surprise, as was Jason Frasor. Robbie Ross was the only relief pitcher who seemed to take a step back, but he also showed moments of brilliance.

So what does all of that equal up to? A thoroughly disappointing season. If you are a Rangers fan, you should be disappointed too. I've already heard others say "Well, we were better than we were a few years ago." That doesn't cut it anymore. A team that expects to be a contender does not look at its past and find comfort in the fact that they had a winning record. From here on, any season that doesn't end with playoff baseball in some form or fashion should be viewed as a failed season. "Well, they gave it all they had," you say. Too bad, that isn't enough. "Injuries held them back." Too bad, the next guy up has to get the job done. No excuses anymore!