Severely Behind: Trades, TTM's and more!

I've said it a hundred times already, but I have been super busy at work over the last few weeks. I've fallen behind on sending out cards, on posting about trades and on posting in general. I apologize again. Therefore, I have a few things to share, and instead of making different posts about everything, it's all coming at you here and now.

First up, I received a package from P-Town Tom over at Waiting 'til Next Year. Tom is my favorite - you all have some serious catching-up to do. Here's why: 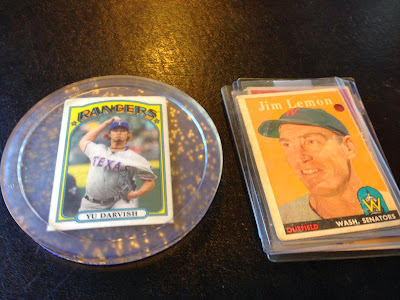 He sent me not only a handful of vintage Senators, but also this homemade coaster featuring the Japanese sensation Yu Darvish! How awesome is this?! This is why I automatically put any cool Cubs aside when I pull them. Which lately, hasn't been very many.

Speaking of which, if you have a few minutes, listen to this interview of the fake Nolan Ryan after the Yu Darvish signing a couple years ago. It's awesome and I listen to it at least once a month. (And if you're wondering what the snow monkey reference is, you can read about it here) 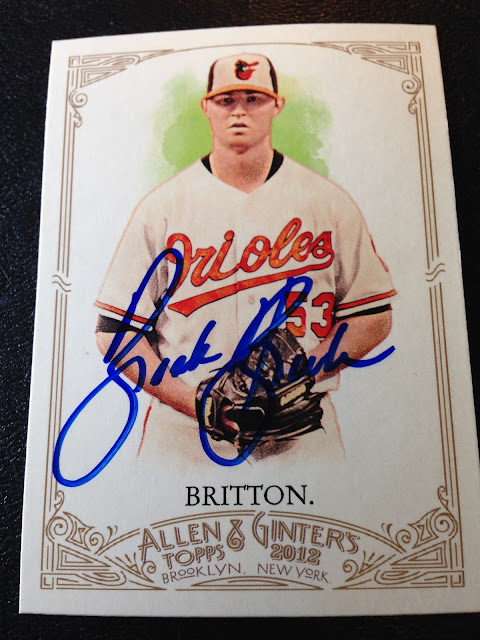 Zack Britton. You're probably thinking, "Judson, you don't collect Orioles. What's the deal with that?" Well, you right. But during the last series against the Orioles when Britton was pitching, I overheard that he was from Weatherford, Texas. Weatherford is my high school's rival and has been for as long as I can remember. I hate Weatherford with a passion still, more than a decade after I graduated high school. But it's still pretty cool to know that he is from there, and this makes a welcome addition to my Random TTM Success folder.

I also added a few cards to my Nelson Cruz PC. Here we have the 2013 Bowman Chrome Gold Refractor, the 2013 Topps Chrome Black Refractor and the 2013 Update Blue Sparkle #'d to 25. All very awesome. 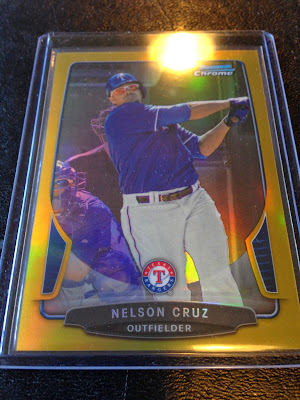 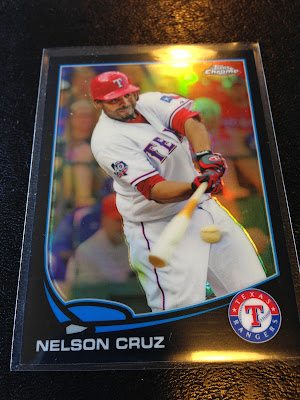 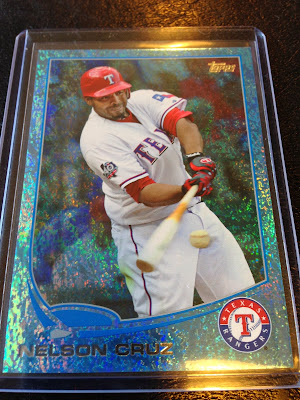 I also added a 2013 Topps Chrome AJ Pierzynski Atomic refractor numbered to 10 to my collection, as seen here: 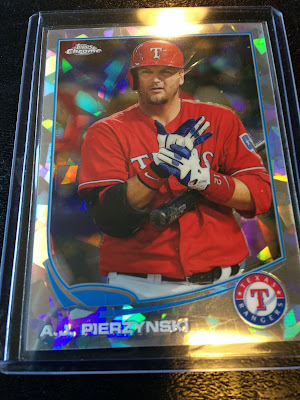 I also took some time to visit my LCS while in Fort Worth last week. This is the same shop owner that opened a new box for me just because he knew the two hits had been pulled out of the box that he already had open. This time when I walked in, he asked how my Chrome set was coming, and then proceeded to give me 34 base cards so that I would be almost finished. He wouldn't accept any money for them. I tried, I even left money on the counter and he followed me out and gave it back to me. Seriously - this guy is amazing.

Anyway, after sorting through and finding the Chrome cards that I needed, I bought the remaining four packs he had in hopes of finding some parallels, to no avail. Still having the itch to open cards, I bought five packs of Update. No autos, no parallels, but I did pull this: 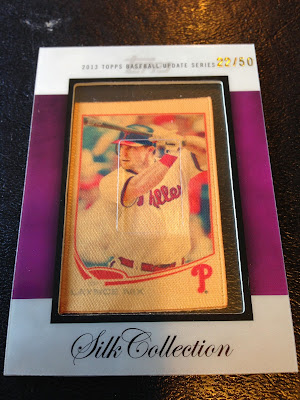 The first silk collection card I have ever seen in person. It's of former Ranger and current Phillie Laynce Nix, numbered 22 of 50. Pretty neat card, but I'm not big on manufactured "hits." So, if you want it, make me an offer!

On my way home that day, I still had the itch for cards, and seeing that I needed quite a few cards for my Update set, I decided to stop at Target and grab a couple blasters. I pulled a numbered parallel out of each blaster. What are the odds of that? Here's the first: 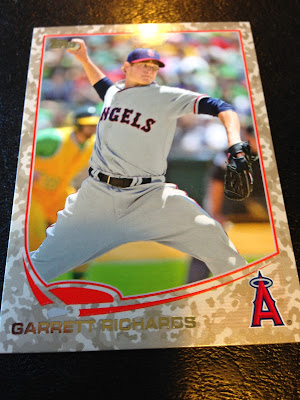 A Garrett Richards camo parallel numbered to 99. Clearly, I don't want this card, so feel free to make me an offer.  The second parallel will remain anonymous for a week. I secretly sent it out to someone who reads this blog as a surprise, and I don't want to ruin it!

Sorry again for the long post, but I have to get whatever I can in whenever I can! Have a good one!
Posted by J. Meeks at 12:20 PM