Well, my 2013 A&G break is in the books. There were definitely a few bumps along the way (getting stuck out of town for work being the pothole in the road), but I think it went pretty well. I have to thank everyone that participated, for without y'all, the break wouldn't have happened. I have to thank Ryan H. for being my "Group Break Sherpa," guiding me in the process. And I thank all you for your patience in working through this with me.

That being said, let's take a look at the cards.

The Good
This one is pretty simple - Allen & Ginter.  The set is clean - and I mean clean.  The base set is uniform in design and flows well. For someone a bit OCD like myself, it makes me feel comfortable. The set mixes all of today's greats and star rookies with yesteryear's stars and I love it.  The mini autos were pretty awesome and classy.

Can I get two cheers for David Murphy? 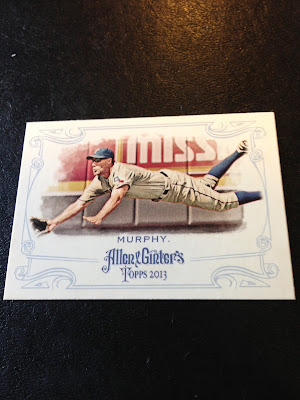 The guy is a baseball card machine. I don't know that I've seen a card lately tha tdoesn't have him making a spectacular catch. Don't believe me? Look at his '13 S2 and '12 GQ cards.

The Bad
There were quite a few packs that had five or six non-player cards in them. That's a problem for me. I don't mind a few non-players in the set; it adds variety and plays on the original Allen & Ginter setup. But this set went WAY overboard on the number of non-players in this year's set.  And let's not forget about the relics and mini relics.  First, does a piece of jersey even appeal to anyone anymore? And in terms of the full size relics, the card just looks cheap. I'm not trying to be harsh, I'm just saying that I think the "hits" would be better served as autos or something even more unique, that's all.

And why are there location cards in the base set? 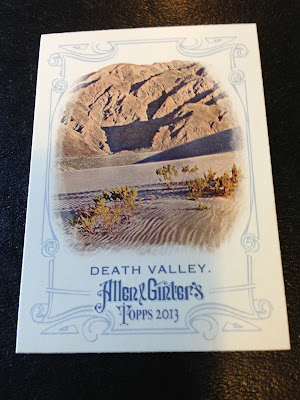 It seems to me that these cards would be better suited as an insert.  Clearly, the boys and girls over at Topps love inserts, so why not just add another to the huge list the set already has? 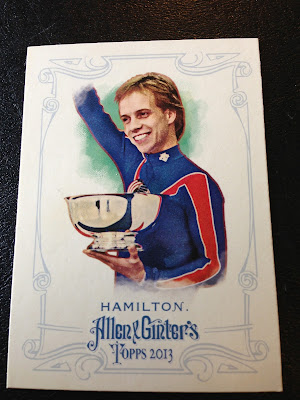 The creepiest card in the set, bar none. 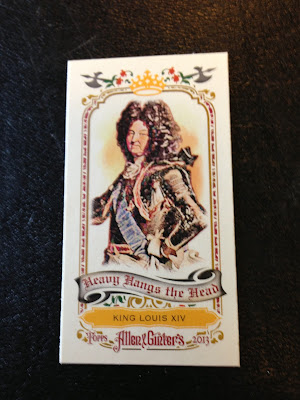 Although, this card was pretty weird, too.

And speaking of my OCD, the multiple designs for hits (though clean) bother me. I like uniformity, and this did not jive with that part of my personality. I'm certain there is someone out there that enjoys the different layouts, but that someone isn't me.

In Closing
I griped about a lot of things, it feels like. But overall, I really like this set. 2012 A&G is what really put me back in the collecting game, so there will always be a soft spot in my collecting heart for the series.
Posted by J. Meeks at 4:35 PM