Today, I'm under the weather. Stress from work and the continuously changing weather has finally caught up to me. I've locked myself in my office with strict instructions to not let anyone in and no calls accepted. I'm being a baby, and I'm okay with that.

In lieu of my illness, today's post is just a collection of shorter posts that aren't really qualified to be a post of their own. So sit back and enjoy.
--------------------
I'm sure everyone has forgotten, but I am hosting a 2014 Gypsy Queen half-case break when the product streets. You get a team of your choice and a randomly assigned team for $40 for five hobby boxes of GQ. Nine people have already signed up - I just need six more! If these remaining slots are filled soon and payment is made, I might be able to swing a deal and get the boxes for less, in which case I would refund everyone their proportionate part. So click on the link above and join now!
--------------------
I've received some cards over the last week that I haven't made mention of. While these definitely deserve their own post, I did what I frequently do: I collated them into my collection before I scanned them in for posting. Greg from Plaschke, Thy Sweater Is Argyle and Marcus from all the way to the backstop were kind enough to send me cards for sets that I was building and for my team sets project. Guys, Thank You, and my sincerest apologies for not having the scans to share!
--------------------
A couple weeks ago, I visited my LCS. Jimmy, the shop owner, insisted that I buy the last box of Tier One he had. I got shafted. Nothing good (for me) in it. He agreed to open his last box of Five Star - and got exactly what he wanted. Here's the video from the break (sorry, I'm an amateur videographer):


--------------------
Over the weekend, I visited my grandparents. My grandmother is responsible for getting me into the hobby, and she still has all of my sets from 1989 through 1993, including the first Upper Deck set (still one of my favorites). She also had some other random goodies: 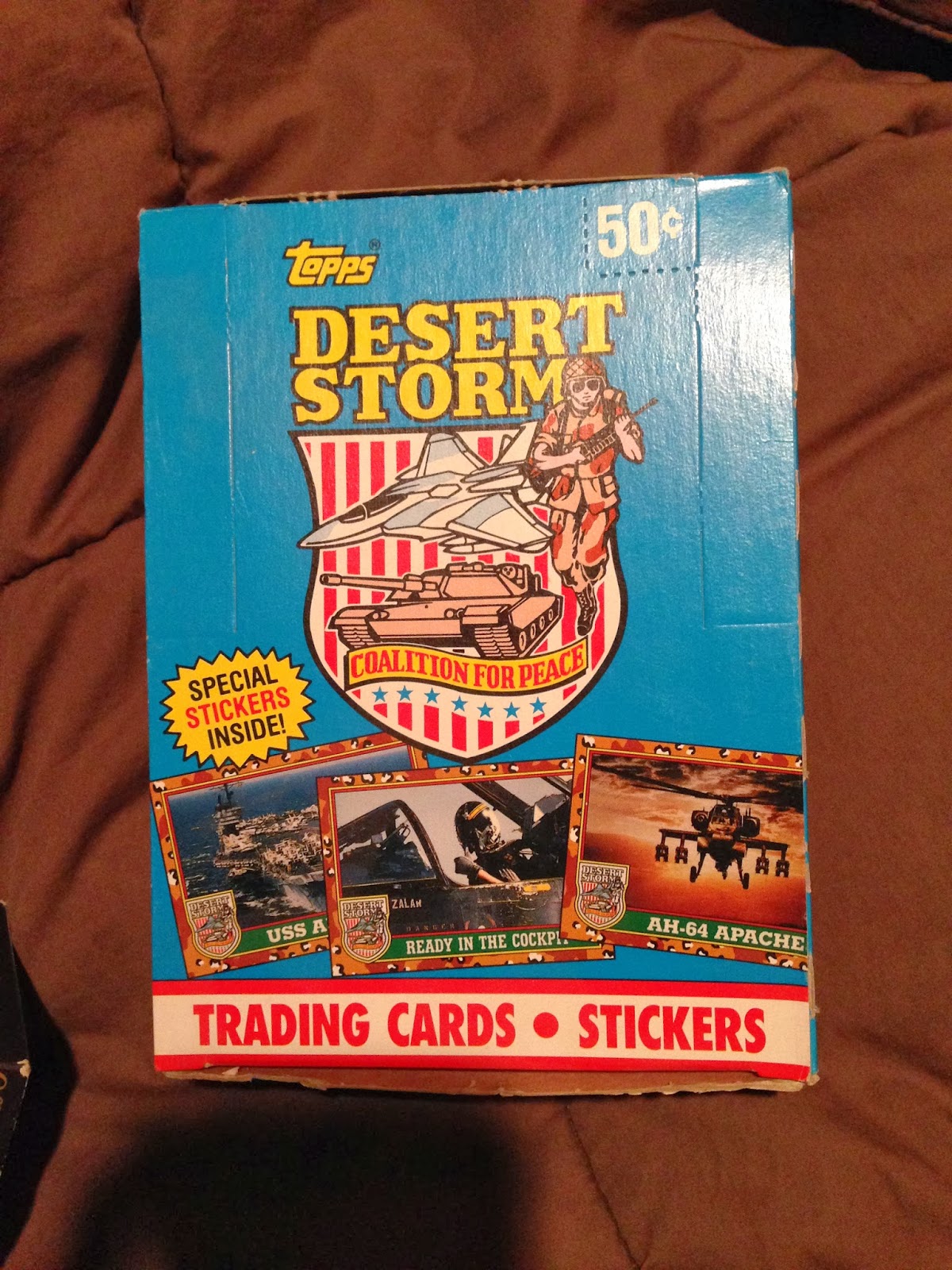 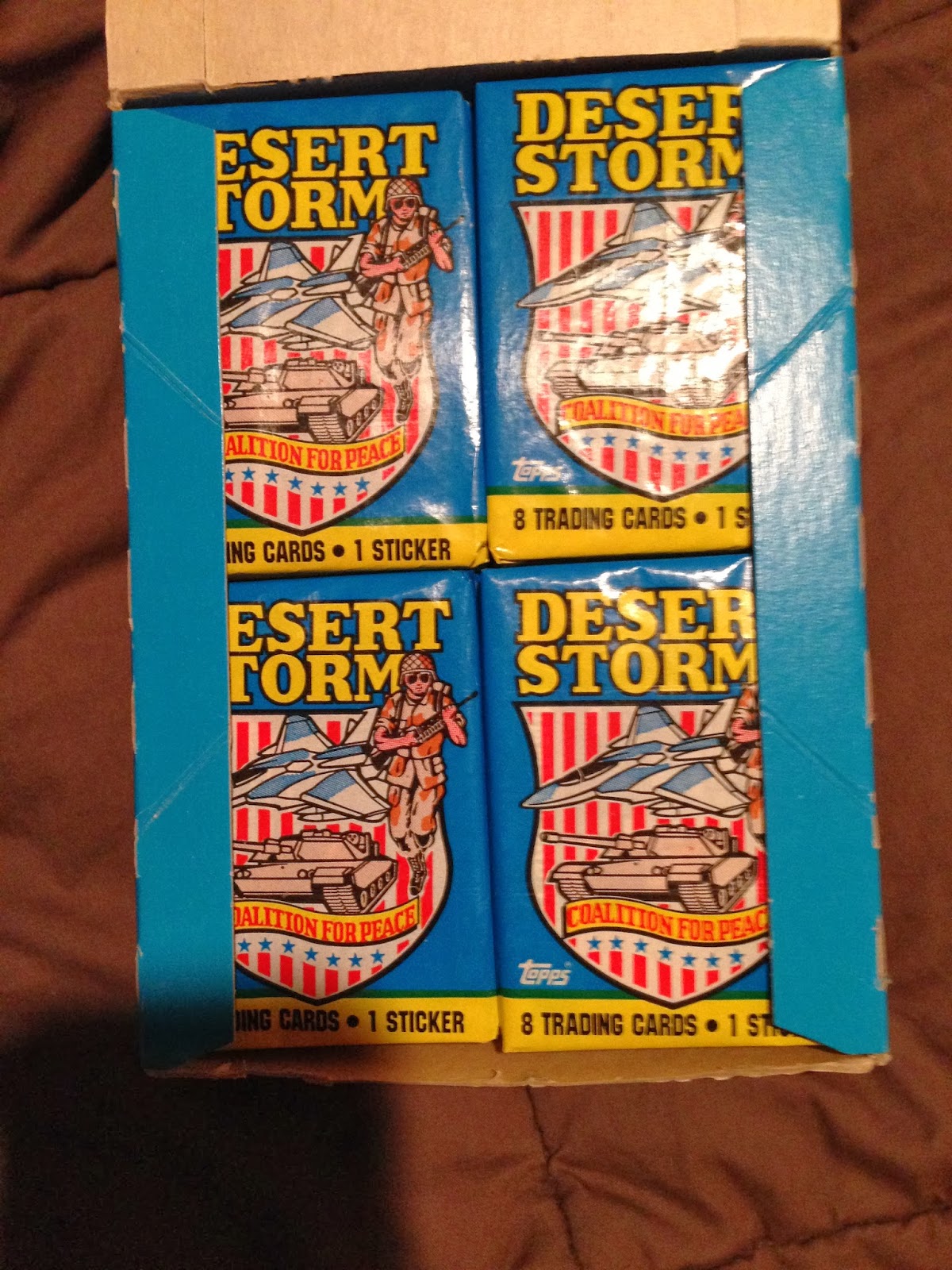 1991 Desert Storm trading cards produced by Topps. Never one to miss an opportunity to make a couple quarters, Topps produced quite a few of these - I believe there was even an update set after this - and I am fortunate enough to have a complete set (somewhere) as well as this open (but not busted!) box of wax.

Also in that collection of goodies was this: 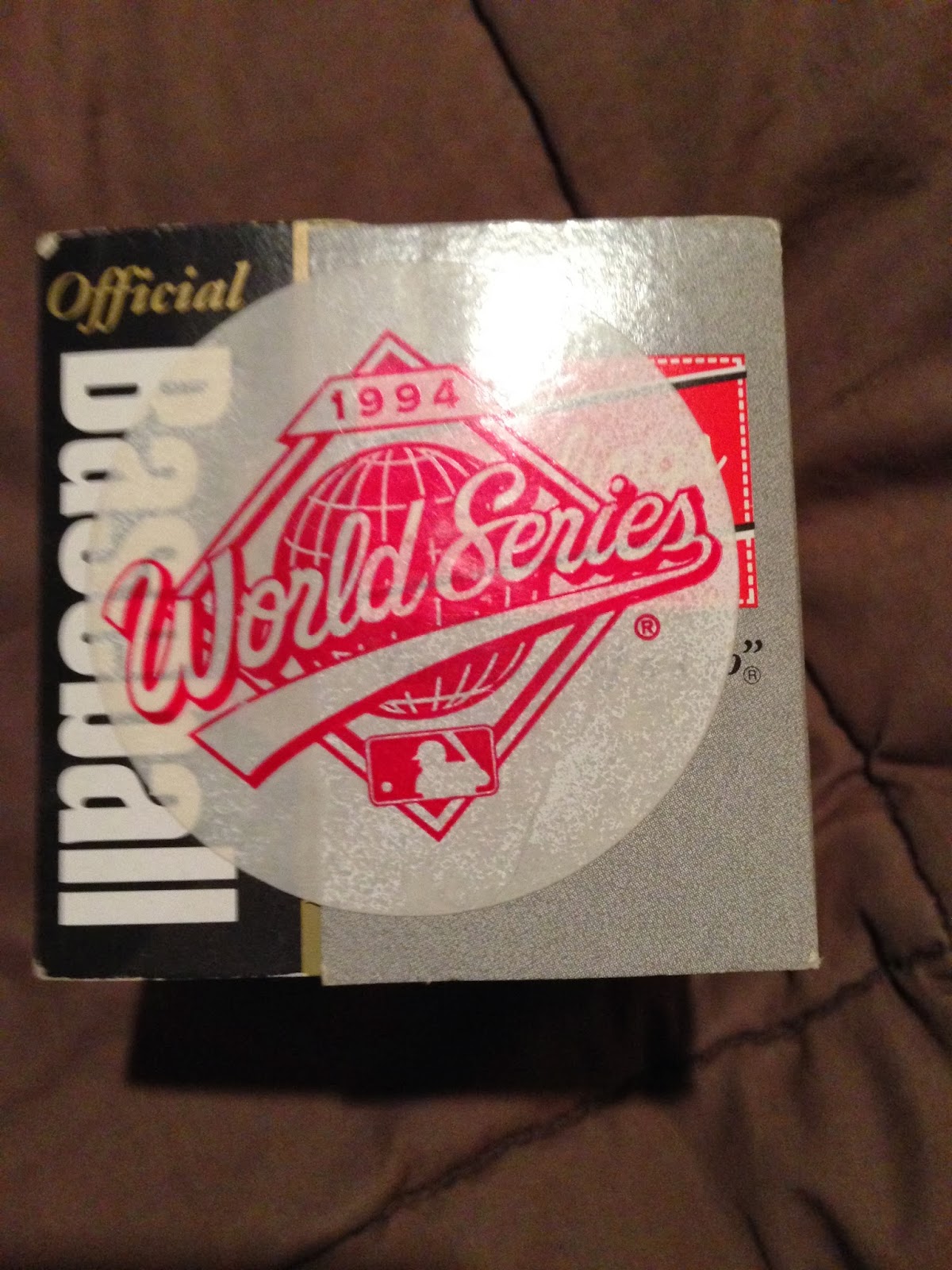 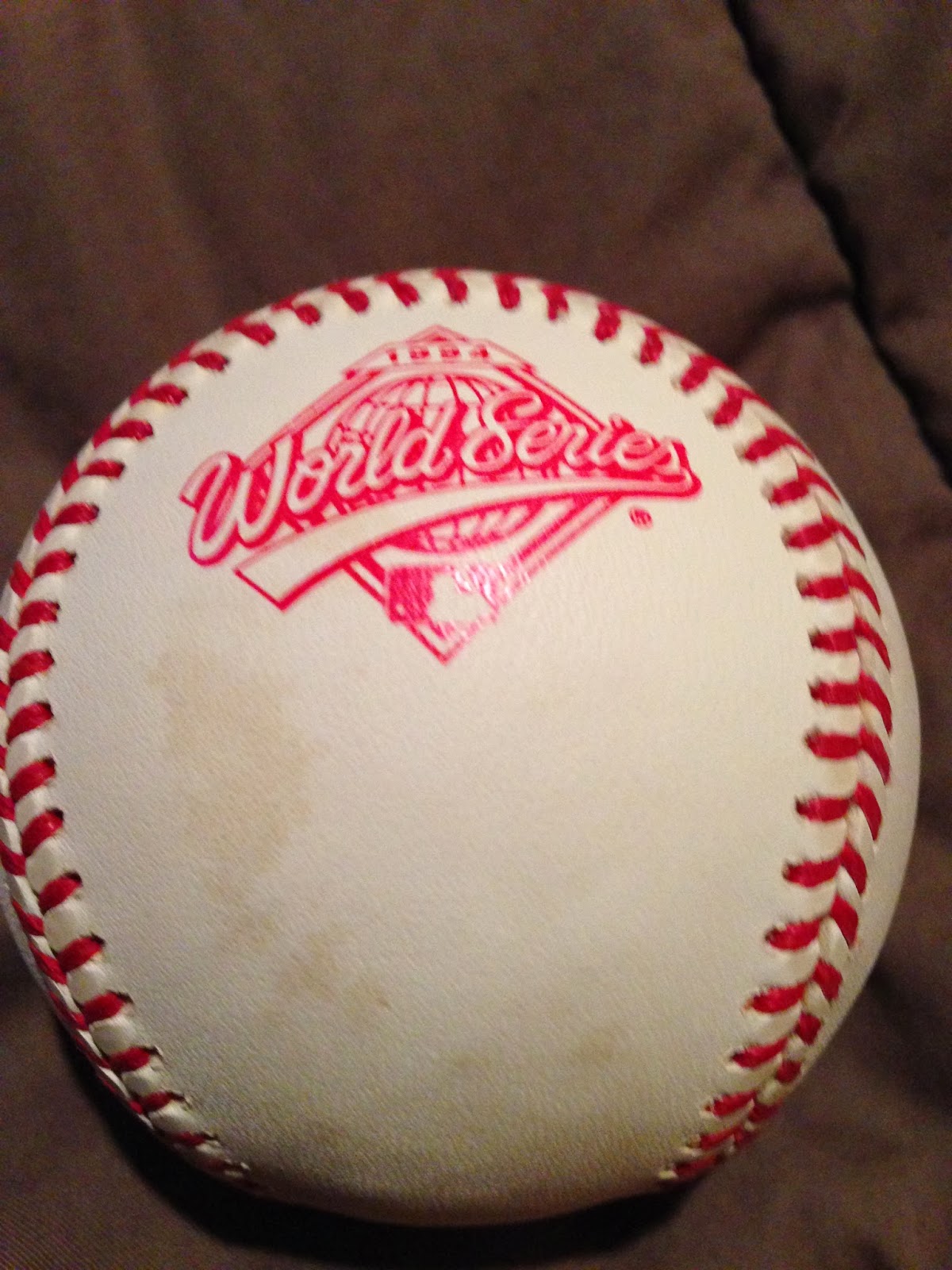 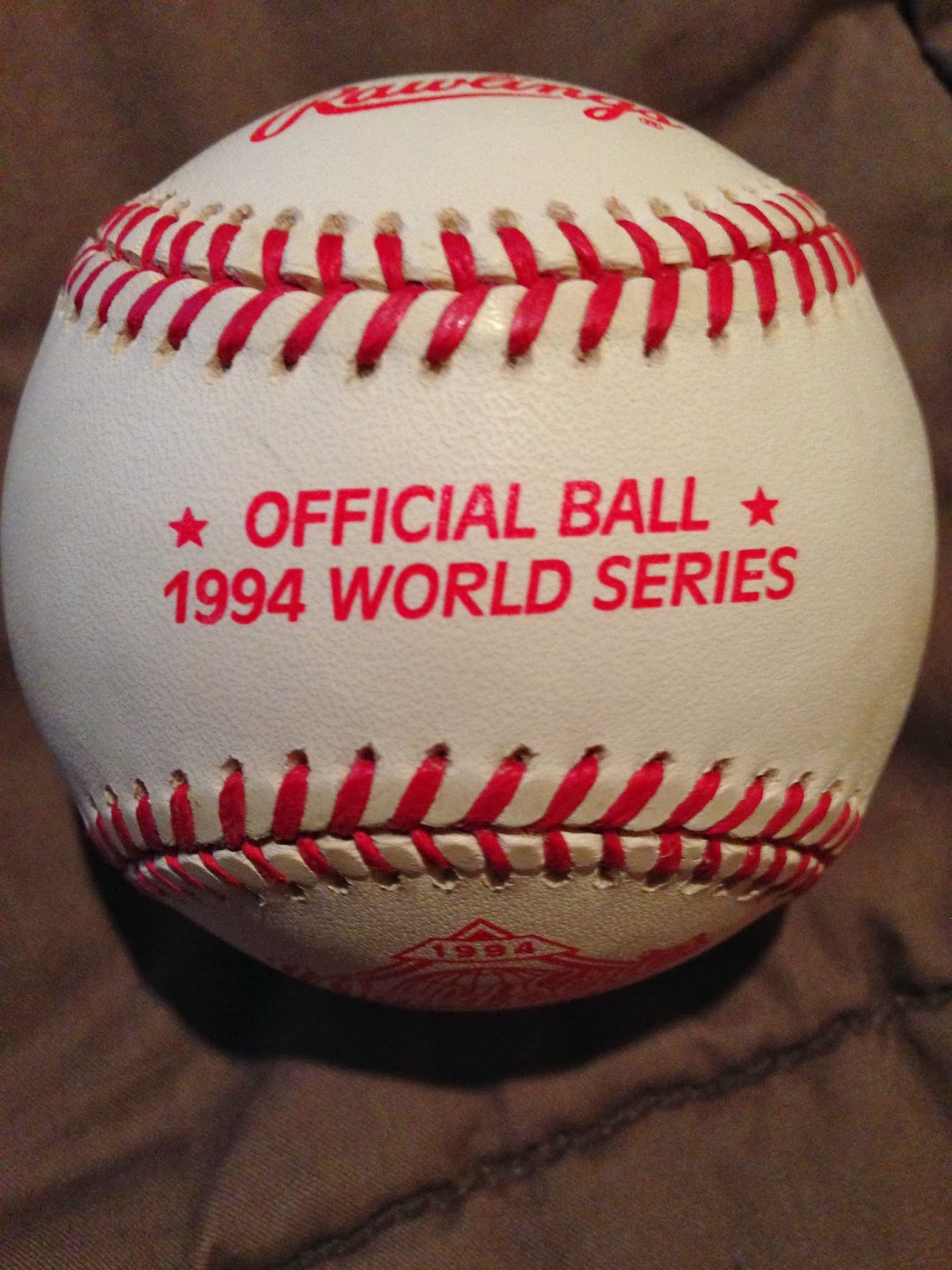 Official ball of the non-existent 1994 World Series. I vaguely remember getting this ball for my birthday in November, so I'm thinking they were probably printed before the strike ended the season. There is some discoloration near the logo. I'm not sure where that came from, as the ball has been in the box since I got it. My guess is the glue from the box did it.
--------------------
I've always dreamed of becoming wealthy and making a museum devoted to the Rangers in my home. Well, this guy did exactly that, except for the Toronto Maple Leafs. Read the article and then be sure to watch the video. Incredibly impressive.
--------------------
Finally, I end with a couple cards I received in the mail last week. First, a TTM that I sent out a long time ago, but it found its way home: 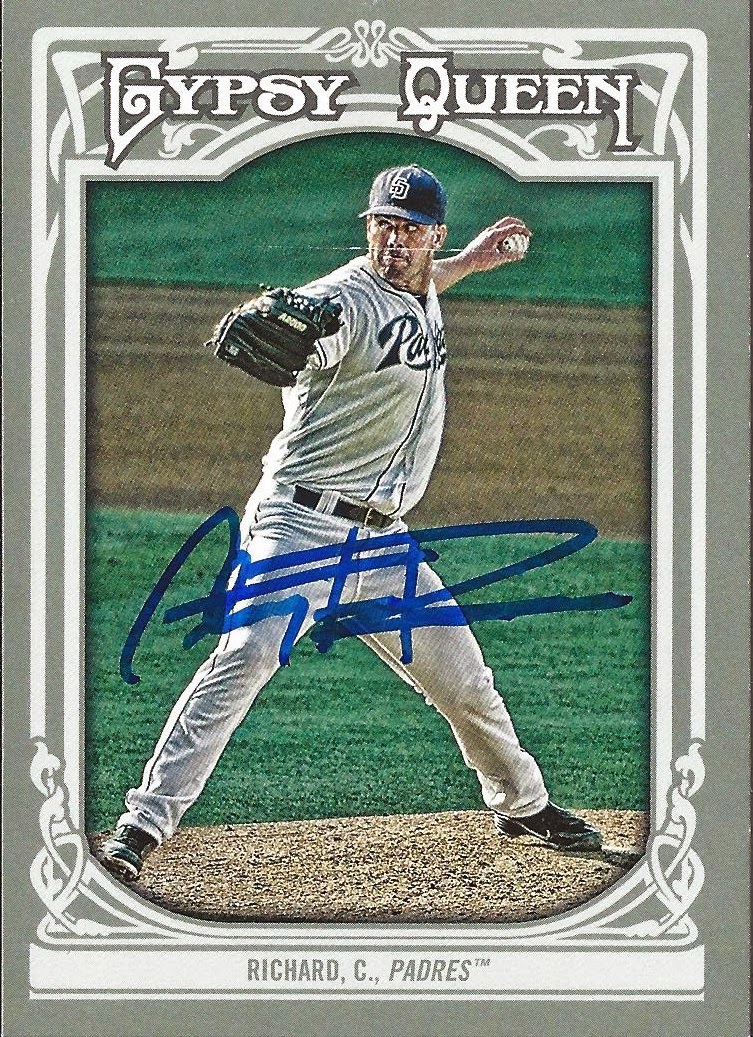 Mr. Clayton Richard, formerly of the Padres and currently a free agent. I like the signature a lot and I'm very happy that he signed in blue. I don't know where the scratch across his face came from, but beggars can't be choosers so I'll take it.

I also received another redemption from Topps, even though they sent it to my P.O. box instead of my work address (I changed the address more than a month ago after my last shipping debacle with Topps). 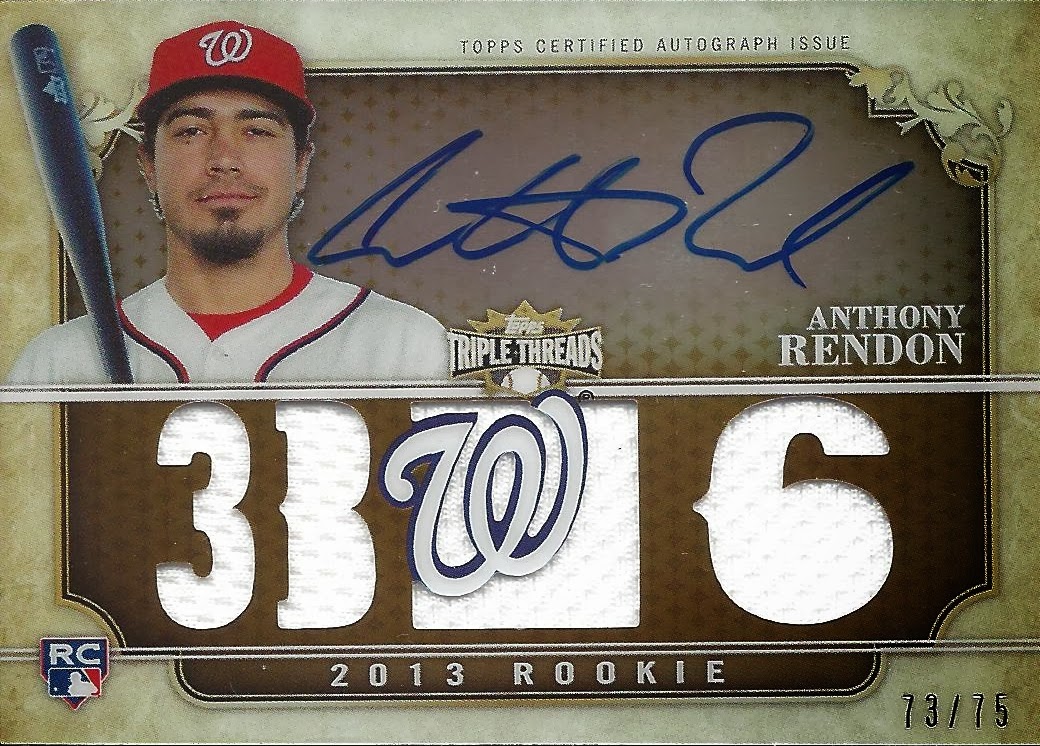 2013 Triple Threads Sepia Rooki Auto of Anthony Rendon, numbered 73 of 75. The scan doesn't do this card justice. It is absolutely beautiful. The on-card signature was a surprise - most of the other players' cards featured a sticker auto. Well done, Topps, well done.
--------------------
Well, that's it. Much more information than I intended. If I get feeling better later, I'll have another post on some PC additions.
Posted by J. Meeks at 8:24 AM