A few weeks ago, I posted a Laynce Nix silk card from 2013 Update and made it known that it was available if anyone wanted it. Later that day, I got a message from Brad of Brad's Blog saying that he was interested in acquiring the card. The card didn't fit anywhere in my collection and I had no real desire to hold onto it, so I sent it over to him with only the request that he send back a trade package that was, in his estimation, a fair one.

I received his return package today, and let me be the first to say it - they guy went above and beyond what would be considered "fair." Let's take a look. 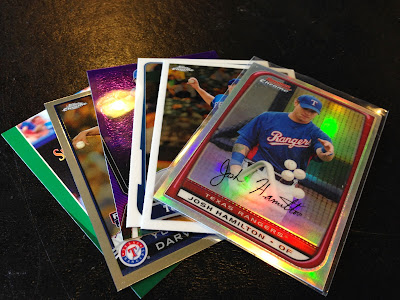 But it wasn't the end. 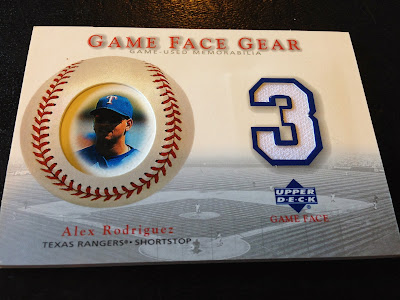 He also sent along this Upper Deck Fame Face Gear card of Alex Rodriguez featuring a game-used jersey swatch. Now, A-Rod isn't on my list of favorite players, but this is a card from his days as a Ranger, so I'll be more than happy to take it. Furthermore, I've never seen one of these cards before, so it's cool to now have one! 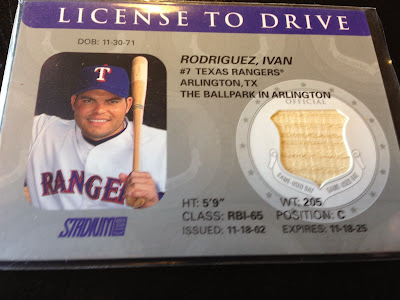 The Icing on this wonderful trade cake is this 2002 Topps Stadium Club Pudge Rodriguez License to Drive bat relic! I have no relics or autos from Pudge, who I consider to be one of the greatest catchers of all time. My bias would even suggest that he is the greatest of all time, but that's a debate for later.

Wow, Brad - this was incredible! I owe you! Thanks for everything!
Posted by J. Meeks at 11:46 AM