Sometimes, A Megabox Is Better Than A Blaster

Since Topps made the Chrome Update available only through retail "megaboxes," I went to Walmart to buy one yesterday. Fortunately, there was one left (side note - it seems that all of you have access to well-stocked Walmarts and Targets, I'm jealous).

So, I buy the megabox for the two packs of Update Chrome. The five packs of regular Update are pretty much useless, since I had completed the set minus one card, US11 Joakim Soria. But what are the odds I would actually get that card, right?

I get to my truck and tear open the box. I grab the two packs of Chrome and go to work. Three cards I need in the first pack along with a parallel. Speaking of which...Dear Topps: If you're going to drop a 55-card set on me that is only available at retail stores in boxes that contain on two packs with four cards each, for the love of God and everything holy, DO NOT PUT INSERTS IN THOSE PACKS. It's ridiculous and creates even more cost for the consumer because we are having to buy more boxes. I get it, that's your business model - but for once, go easy on those of us who are set builders.

I rip the second pack, two cards that I need, one that I don't. Oh, and this guy: 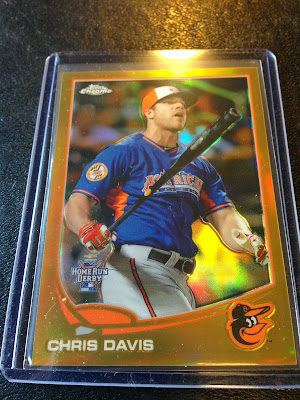 The Chris Davis gold parallel, numbered 219 of 250. Dig it! Normally, I would pack this up and send it to William for his Davis PC. But, since I'm trying to raise money for the Wounded Warriors Project, onto the Bay it goes. Sorry William!

So that's it for Chrome Update. Six cards that I end up using. Not too bad. Now I just have to open the Update, even though I know it will yield nothing for me.

There could be nothing else worthwhile in the remaining four packs, right? 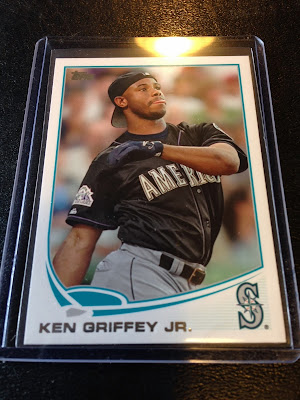 The player variation SSP for The Kid! Sick pull! This card is awesome - Griffey was my first "favorite player" - and I really, really want to keep it. However, the cause is greater than my want. So this one, too, will find it's way to eBay later today.

Well, there it is.  A megabox that was better than a blaster. Did not see that coming.