I went a bit overboard today at my LCS. I had a little extra cash in the form of a Christmas bonus, and I decided to share it with Jimmy, my LCS owner. In all I busted one box of 2013 Topps Chrome and two boxes of 2013 Bowman Draft Picks & Prospects.

The box of Topps Chrome was pretty uneventful. I landed two parallels:

Both of these are up for trade. The two autos from my box can also be yours (for nest to nothing, really): 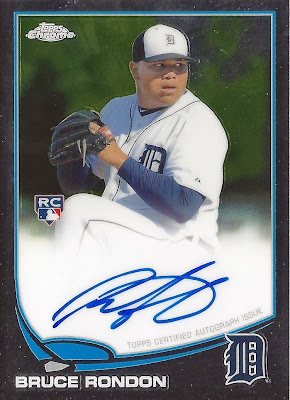 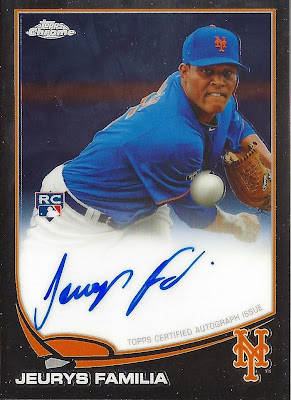 My scanner makes the cards look like black parallels, but, in reality, they are base autos. Make me an offer. It doesn't have to wow me; let's face it, these two are bottom of the barrel autos (no offense).

Sadly, the other guy in the shop opened the last box of Chrome after me and pulled a Starling Marte printing plate in the first pack, along with a redemption for an Avisail Garcia refractor auto and a Dylan Bundy base auto. I was not happy with my box selection.

My Second box of Draft Picks and Prospects wasn't incredible as I hoped it would be (more on the first box in a moment). The auto was a base auto of Red Sox pitching prospect Trey Ball. I didn't scan it in because I already put it on eBay (more on that in a moment, as well). There wasn't a lot more excitement from the box, and what color I did pull, I've already set aside to send off to some of you.

My first box of DP&P, however, was a pretty good one. After opening 23 packs, I still hadn't pulled the auto. I was beginning to think that perhaps my box failed to get it's guaranteed autograph, but the fourth card in the final back was this beauty: 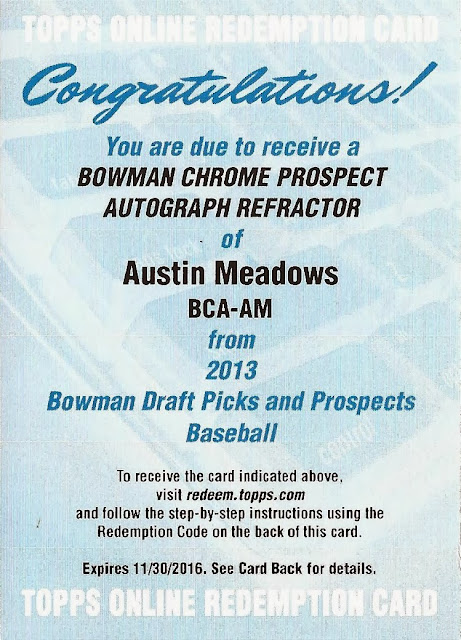 Okay, I know it isn't a Yasiel Puig auto, but Meadows is the cover boy for the product. This redemption card is going for more than $100 on the Bay. So, naturally, I put mine on there too. (Sorry Nate) I've had a couple extremely lowball offers for it, but once I get something relative to what the others have sold for, mine will be on its way.

Now, I feel obliged to explain myself and my eBay habits. There are two cards in particular that I want to add to my player collections. They are both out of my normal price range, so selling the hits I pull that don't fall into one of my collections are going to eBay. I swear I'm not in this for the money, but I do use some of my cards to attain other cards I want more.

Anyway, that's my story of the day. If you get a chance next week, visit your LCS and buy a few packs - shop owners are a dying breed and we need to help them out as much as possible!
Posted by J. Meeks at 4:11 PM