...Since I posted anything. I grabbed a few boxes for Christmas, but that is another post. Today, I want to share some eBay acquisitions.

First up, for my Anthony Rendon PC: 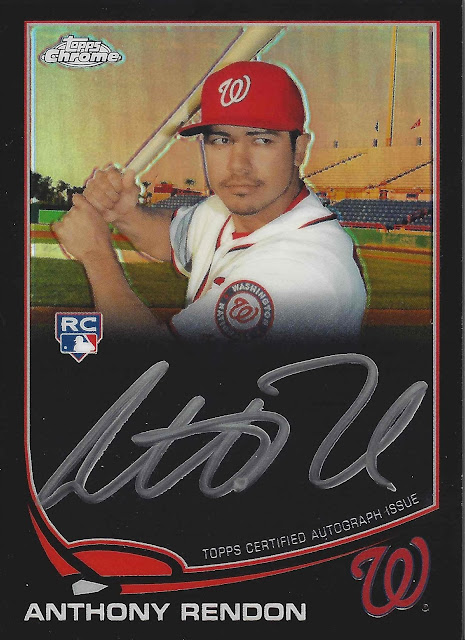 It's the beautiful silver on black auto from 2013 Chrome, numbered 25 or 25. I was looking for a copy, but none was posted. So, I searched for completed items (which included items that did not sell) and found this guy from seller dotheritethang. He re-listed for me and I bought it immediately. There were some problems via the USPS and he went way out of his way to get some answers. By far, the best seller I have encountered on eBay. He doesn't currently have anything up for sale, but keep an eye out. He's pretty awesome.

Next up, a piece for my Nelson Cruz PC: 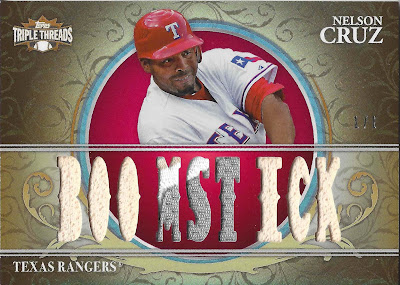 This is the Ruby "Boomstick" parallel, numbered 1 of 1. Pretty stoked to add a 1/1 to the collection (though I feel like there may be more in the future). I'm trying to put together the Boomstick rainbow, I think. Sadly, it appears as though my Cruz PC will end with 2013 cards, since the signing of Shin Soo Choo pretty much kills any chance Cruz may return tot he Rangers.

Well, that's it for now. I have more cards to show, but they will have to wait until tomorrow or later. I hope everyone had a Merry Christmas!
Posted by J. Meeks at 12:13 PM