Last week, I read Tom's post about "The Box of Mystery." In case you haven't read it (and you refuse to click the link you just read over), Tom has decided to pay some good card collecting karma forward by randomly sending the box filled to goodies to one of his trade partners. 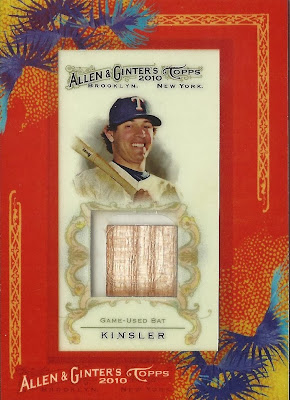 First was this sweet Kinsler relic from 2010 A&G. I love these relics - I can never decide if they make want to be on a beach watching a sunset or locked in my room trying acid and mushrooms for the first time. Seeing as I am too pretty for jail, I'm leaning toward the beach idea. 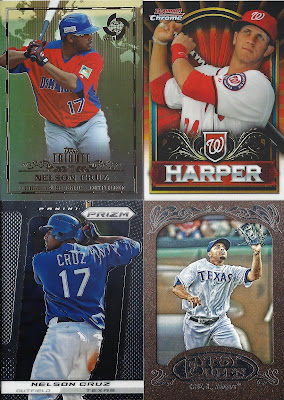 He was also kind enough to include some cards for my Cruz and Harper player collections. These are all very much appreciated, as I didn't have a single one of them.

But the kicker was this card: 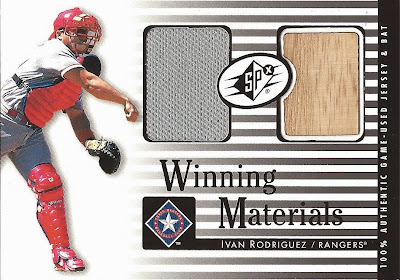 This SP Winning Materials dual relic card of who I think is arguably one of, if not the, greatest catchers of all time, Pudge Rodriguez. Side note: it still seems odd to me to see his cards with "Ivan" Rodriguez. I don't know that I have ever referred to him as anything other than Pudge (even though I knew his nae was Ivan).

So now it is my turn. One lucky trade partner will receive the box of mystery from me, just as soon as I find the right cards to send. Tom's package was a tough act to follow!

Thanks again, Tom. I really appreciate all of this!
Posted by J. Meeks at 1:50 PM